Top of the Mind Ad Survey | Why shouldn’t Hero Honda have some fun?

Advertisements for mobile phones and services dominate the ratings for September, with four ads for telecom, one each from Vodafone—BlackBerry and Samsung Guru and two from Airtel, featuring in the top 10 of the ad reach index, a measure of awareness and brand recall. But it is Hero Honda that zips ahead in the race with an ad for its Pleasure scooter, targeted at women.

Actor Priyanka Chopra pumps up the Pleasure commercial with an appeal to girl power. With an awareness of 71% and a brand recall of 95%, the ad clocks 67 on the reach index. 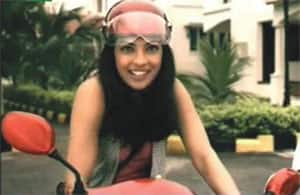 Draftfcb+Ulka On the way out of her house, actor Priyanka Chopra is inundated with questions—by her mother, brother, the ladies in the locality. Where is she going? When will she be back? She responds with humour and rides off on her Hero Honda Pleasure scooter, throwing in a question of her own: Why should boys have all the fun?

The Mint-Synovate-TVAdIndx survey covered 772 respondents from high-income groups in Delhi, Mumbai and Bangalore.

Among the top 10, September has four ads scoring in the low 50s on the reach index and another four scoring in the 40s, indicating that ads for the month fared poorly overall.

Food brands did well in August, with four ads in the top 10, but there is only one such ad in September—for Maggi Vegetable Multigrainz Noodles. Instead, there are three ads for wall paint—two from Asian Paints and one from Nerolac.

Ads in September are below par even on the ad diagnostics index, which measures softer features such as likeability, enjoyment, believability and claim.

Eight ads had scored 60 or above on this index in August, including four that scored 70-plus. In contrast, only two ads in September have gone past 60 and none breached the 70 mark. Three ads are in the 50s and five are languishing in the 40s.

The Hero Honda and Vodafone—BlackBerry ads, which topped the reach index, exchange positions on the diagnostics index, with the telecom?service commercial taking the top slot.