It is a segment that is still considered to be in its infancy, but that has not deterred investors who poured close to $100 million (around Rs400 crore) into health care firms through 2007, up from $41 million in 2006.

Venture capitalists (VCs) invested a total of $928 million in entrepreneurial companies in India during 2007, according to the India Venture Capital Report, published by Dow Jones VentureSource. Companies in the health care sector accounted for more than one-tenth of this investment. 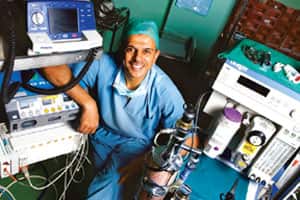 It is not just health infrastructure, such as hospitals and diagnostic laboratories, that is attracting investor attention. Start-ups focused on rural health care, online medical services, design and manufacture of medical devices and specialized services such as telemedicine and teleradiology are also raising equity capital.

In March, Vaatsalya Healthcare, a start-up that aims to establish a network of 20-bed hospitals across semi-urban and rural areas of Karnataka, raised $1.5 million in equity from investors who focus on early-stage firms.

Perfint Engineering Services Pvt. Ltd, a two-year-old start-up with operations in Chennai and Mysore, raised $3 million from IDG Ventures India in December. It was the second round of investment for the start-up that manufactures image-guided medical devices—the company had earlier raised seed investment of $500,000 from early- stage venture fund Erasmic Ventures.

Also in the fray are specialized health care providers such as Neurosynaptic Communications which, in collaboration with the Indian Institute of Technology, Madras, has developed a range of medical diagnostic equipment and solutions, having raised seed funding from the Ventureast TeNet fund as well as APIDC Biotech Fund.

“Raising funds earlier has not really been easy, but we are fortunate to now have investors who understand early- stage companies and the rural health care market," says Sameer Sawarkar, chief executive officer of Neurosynaptic Communications, who aims to raise further capital later this year to roll out the company’s branded telemedicine services to 17 districts countrywide.

The sector is also seeing the launch of Web 2.0 start-ups such as Healthcare Magic. Launched in January, Healthcare Magic plans to build an ecosystem of online health care; consumers can share experiences and opinions about doctors, chat with doctors online, compare insurance policies and buy medicines on the portal. In New Delhi, MeraMD.com—a health portal that is six months old—aims to provide a countrywide database of medical practitioners, customer ratings of medical services and also sell medicines and insurance online.

This flurry of activity is based on sound economics. By 2015, one-fifth of India’s population is expected to own medical insurance, a factor that will contribute to an estimated increase in consumer spending on health care from Rs82,000 per household in 2005 to Rs1.4 lakh per household, according to a report on the Indian pharmaceutical sector by McKinsey, a global consulting firm. 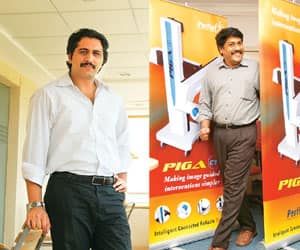 For now, the bulk of the money is going to the health infrastructure end of the business because the gap between demand and supply is most skewed there. The bed to population ratio in India is currently 1:3,500, while in developed economies, it is 5:1,000.

“It is a sector that is largely unstructured but now, with rising incomes, people want the best health care facilities available," says Aluri Srinivasa Rao, director of investments at ICICI Venture Fund Management. Iven Medicare—the company that ICICI Venture has floated to lead all its investment in the health care sector—has invested in four hospital groups, including Sahyadri Hospitals in Pune, Delhi-based RG Stone Hospital, and Medica Synergie, a health care group based in Kolkata.

At Sahyadri Hospitals, Iven Medicare has helped develop a plan for a tertiary hospital network that will see the establishment of 100-bed hospitals in places such as Latur, Nashik and Kolhapur. “Iven Medicare will make available funds of up to Rs450 crore over the next three years for us to set up a chain of hospitals across Maharashtra," says Charudatt Apte, chairman, Sahyadri Hospitals; he has identified Gujarat and Rajasthan as the next target locations.

By the end of 18 months, Dr Apte aims to have 35-40 such hospitals under the Sahyadri banner. Typically, each tertiary hospital will require an investment of about Rs15 crore and will offer primary medical care across all disciplines. “For all high-end medical care, patients will be directed to the central hospital in Pune," says Dr Apte.

A significant element of the Iven Medicare model is the launch of an in-house insurance policy that will be valid across all hospitals under its brand umbrella. “We plan to ensure that health care is made affordable for all segments, including senior citizens," says Dr Apte. Sahyadri Hospitals currently offers an in-house scheme for senior citizens through the Pune Municipal Corporation that charges a premium of Rs250 per year for all in-patient care of up to Rs1 lakh, including pre-existing diseases, and a 50% discount on all out-patient care.

Vaatsalya Healthcare has adopted a more minimalist approach. The start-up, which already has three 20-bed hospitals in Hubli, Gadag and Karwar in north-west Karnataka, plans to extend the model to seven more centres in the state. “Each 20-bed hospital will offer three lines of medical care—gynaecology, paediatrics and general medicine—and will cost between Rs60-70 lakh to set up ", says Dr Naik.

Vaatsalya Healthcare will look to bring in doctors who run small nursing homes in these towns; their facilities can then be upgraded to fit the Vaatsalya blueprint, with the doctors functioning as owner entrepreneurs. So, too, at Iven Medicare, where Rao envisages that tertiary hospitals being set up by Sahyadri Hospitals will either be greenfield projects or existing hospitals that will be acquired and upgraded.

“By the end of three years, we hope to have at least 100 hospitals under the Vaatsalya Healthcare model," says Dr Naik, who is also targeting tie-ups with insurance companies for a cashless payment model that will benefit non-metro customers.

Away from the capital intensive infrastructure segment, investors are also quietly backing start-ups that leverage technology in the medical services and devices market. Perfint Engineering Services is a start-up that builds medical imaging devices which go a step beyond CT scans in that they help doctors identify the exact location of the problem without having to resort to an invasive procedure. The five who founded the start-up had all worked together earlier at GE Healthcare and were aware that the big players in the medical devices market would not enter this specialized segment. “These are technology-intensive niche products, the demand for which is expected to grow 20-25% every year over the coming decade as the health care industry expands," says Nandakumar S., chief executive officer, Perfint.

These imaging devices are used for detection and treatment of cancer of the lungs and abdomen. In the next 18 months, the team at Perfint aims to have similar devices on offer for the treatment of spinal disorders and brain tumours.

“The attractive feature of Perfint’s business model is the underlying technology; it is an example of a company that uses complex engineering to build medical care products," says Sudhir Sethi, managing director, IDG Ventures India, who feels a crucial factor in his firm’s decision to invest in Perfint was the growing market opportunity in India for such non-invasive imaging devices.

“Right now, we are building imaging devices for CT scans; the next step will be to offer similar products in the MRI (magnetic resonance imaging) segment," says Nandakumar.

In suburban Bangalore, yet another health care start-up, Teleradiology Solutions, is evaluating plans for a pan-India launch of its services. Currently, the start-up covers nine centres in Singapore through a tie-up with the ministry of health. Also on offer are teleradiology services to groups in Puerto Rico, with services soon to be launched in West Asia and Europe through a subsidiary company, Netherlands-Telerad Europe, which will target the continent.

“The health care sector is booming, wherein capital invested is recovered rapidly—there is a new interest in this segment," says Sunita Maheshwari who, along with her husband, Arjun Kalyanpur, returned to India after training at the Yale School of Medicine to launch the start-up in 2002.

So far, the start-up has opted for organic growth, ploughing back profits into the business, as it had a cash positive model from the second year. “Right now, in India, we do not offer a paid service; instead, we provide free coverage to charitable hospitals such as Ramakrishna Mission Hospital in Arunachal Pradesh and Ashwini Children’s Hospital in Bijapur in northern Karnataka," says Dr Maheshwari, who feels a roll-out of paid services across semi-urban and rural India would require greater capital infusion.

Investors, too, are keenly aware of the scope offered by technology-leveraged health care models. “We aim to have umbrella brands across segments such as pathology laboratories, telemedicine and teleradiology that address tertiary markets," says Rao.

Clearly, it’s the turn of doctors to ride the growing wave of entrepreneurship.