'Ek Nayi Subah' generated 5.03 million impressions on an average across all channels

New Delhi: The televised crescendo of the central government’s two-year anniversary celebrations was watched by over 23 million unique viewers on 24 television channels, including those from state broadcaster Doordarshan and private news channels that aired the show.

Data shared by TV ratings agency Broadcast Audience Research Council (BARC) India indicates coverage (in millions) of unique number of viewers that watched the programme for at least one minute. The DD network that aired the show across 10 channels, including DD National, DD Bharti, DD Kisan and regional channels like DD Bihar, DD Lucknow and DD Northeast, recorded a viewership of 14.8 million, while the remaining 10.08 million watched it across 14 different private news channels. Total viewership stood at 23.17 million.

In a six-hour glitzy event at New Delhi’s India Gate lawns on 28 May called Ek Nayi Subah (A New Dawn) interspersed with entertainment programmes, a gathering of political leaders, Bollywood celebrities and business executives discussed topics ranging from Surat having the cleanest railway station to a Braille-equipped train between Mysore and Varanasi for the visually impaired to the government’s sanitation programmes. 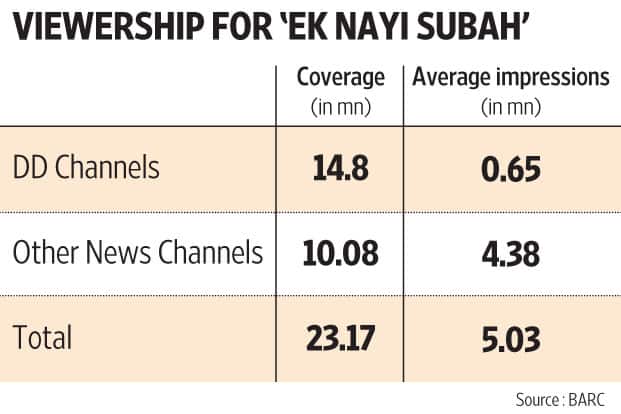 Prasar Bharati that runs the Doordarshan network is clearly happy. A top official at Prasar Bharati, who did not want to be named, said: “These numbers are much higher compared to the viewership on a regular day at Doordarshan. Typically, DD National, the flagship channel of the state broadcaster, is watched by 2-3 million viewers during prime time," he said. However, Ek Nayi Subah was telecast on several DD channels simultaneously.

“It’s a political event, not an India-Pakistan match. It’s a good number given the context and the duration of the event," said Sunil Lulla, managing director and chairman at advertising firm Grey Group India.

“The idea of the programme was to inspire people and showcase what everybody at the government is doing," said the Prasar Bharti official.