The Bollywood star could either stay in Los Angeles to pursue a lead role in Will Smith's new film, Seven Pounds, or she could return home to Mumbai to celebrate Karva Chauth, a day-long ceremonial fast that some married Hindu women observe as a prayer for their husband’s health and long life (the observance is a new one for Bachchan; in April she married Abhishek Bachchan, an actor and the son of film star Amitabh Bachchan, a union that prompted Time magazine to describe the three as Bollywood’s Father, Son and Holy Babe).

Ultimately, Bachchan chose to return to Mumbai and starve with a smile. 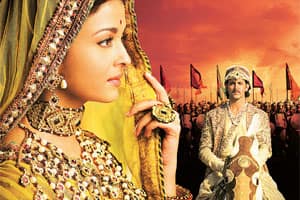 Coming soon: Aishwarya Bachchan (left) and Hrithik Roshan in Jodhaa Akbar, releasing worldwide on next Friday. Roshan has said he is actively pursuing Hollywood but won’t do a film just because it’s Hollywood.

National television channels covered her first Karva Chauth as headline news. Two months later, she shrugged off her loss in an interview. "You do what you have to do," she said. "Feeling torn and thereby unhappy, confused or guilty is not something I want to feel. So, you make your choices and go with it. You get some and some you don't."

This month, Bachchan brings some of that clarity and traditionalism to a role she was born to play: that of Queen Jodhaa in the sumptuous-looking historical drama Jodhaa Akbar. The $10 million (Rs39.5 crore) film is one of Bollywood’s biggest productions this year. It will be released worldwide on 15 February, in more than 115 theatres in the US alone, making it the biggest American release ever for a Hindi film.

Jodhaa Akbar focuses on that quintessentially Indian subject: arranged marriage. Set in the 16th century, it explores the marriage between the great Mughal emperor Akbar, a Muslim, and his Hindu wife Jodhaa.

Historians have described the union as a political alliance, but in the hands of Ashutosh Gowariker, the film's director, the story has become “an epic romance with its share of battles, harem politics and intrigue", he said in a telephone interview. Gowariker, whose 2001 period film, Lagaan: Once Upon a Time in India, was nominated for an Oscar for best foreign film, isn't claiming factual accuracy but insists that the film is “embedded in historical truth".

He cast Bachchan as the queen (a figure some Indian historians dispute ever existed) because, he said, “Aishwarya is a comic book princess with a certain dignity, elegance and sense of purity." For the role of Akbar, Gowariker wanted someone with “the physique of a warrior and the face of a romantic", and selected another Bollywood superstar, Hrithik Roshan.

Gowariker described it as a dream cast which, at least as far as overseas box office appeal goes, seems accurate. Both actors, to steal the phrase Pauline Kael invented to describe Michelle Pfeiffer, are “paradisically beautiful", and are consummate superstars. With their ethnically indeterminate looks and impeccable English, Bachchan and Roshan could be India's first international movie stars.

Bachchan has already made considerable progress in that direction. She is the international face of L'Oreal and Longines, as well as a consistently glamorous presence at the Cannes Film Festival; in 2003, she became the first Bollywood actress to serve on the jury. In 2004, she made Time magazine's list of the 100 most influential people in the world.

So far, Bachchan's international projects—Bride and Prejudice, The Mistress of Spices and The Last Legion—have sputtered commercially and critically, but with her high-profile marriage, A-list brand endorsements and plum Hindi film projects, she continues to generate global attention.

Smith, who wanted to cast her in Hitch, but couldn't, because of scheduling conflicts, remains an ardent admirer. "She has this powerful energy where she doesn't have to say anything, do anything, she can just stand there," he said in a February 2006 interview with BBC News.

“Anything she's making, I'll be there."

Next February, Bachchan will be seen in Pink Panther 2, in which Inspector Clouseau, played by Steve Martin, teams up with a squad of international detectives to catch a thief with a penchant for historical artefacts.

As it happens, her Jodhaa Akbar co-star, Roshan, 33, rejected a role in the same film because it wasn't important enough.

In an interview in Mumbai, Roshan made it clear that while he is “actively pursuing Hollywood", he would not “do a film just because it's Hollywood."

Hollywood and Roshan have been flirting with each other since he burst into Bollywood with a film called Kaho Naa Pyaar Hai in 2000. The film, directed and produced by his father, Rakesh Roshan, was a blockbuster and catapulted the newcomer to superstar status in India.

In 2002, the American edition of GQ ran a profile headlined: “The most famous person you've never heard of," and rumours of a project with Tarsem Singh, the Indian-born director of The Cell, and Jennifer Lopez swirled in the Indian press. It didn't happen, nor did a series of other proposed projects that Roshan declined, for various reasons. But last October he took his first concrete step towards a Hollywood career by signing with Brillstein Entertainment Partners in Los Angeles.

Despite their global stardom—Bollywood has an estimated annual worldwide audience of 3.6 billion—Bachchan and Roshan will not find it easy to break into Hollywood. The two film industries are forging closer ties (last year, Sony Pictures Entertainment released its first Hindi production, Saawariya), and a few Indian names such as Mira Nair, Kal Penn and Shekhar Kapur diversify the Hollywood landscape. Still, for a variety of reasons, no actor has successfully made the transition from Bollywood to Hollywood.

Schedules and expectations are difficult to match. Bollywood superstars are generally unwilling to play supporting roles in American movies, and there just aren't many movies coming out of Los Angeles that feature Indians as leads.

“You don't want to sacrifice your own kingdom to set up somewhere else," Gowariker said. “But an international star can only be in the English language."

If Bachchan and Roshan do cross over, they could be Hollywood's most old-fashioned stars. Until she married at 33, Bachchan (now 34), lived with her parents, which both Oprah Winfrey and David Letterman noted when she appeared on their shows in 2005 ("we don't need to take appointments with our parents to meet for dinner," she replied cheekily to Letterman). Now that she is married, Bachchan lives with her husband at his parents' house in Mumbai.

As for Roshan, he is married to his childhood sweetheart. They are expecting their second child this year, and they also continue to live with the senior Roshans.

Unlike Bachchan, Roshan has yet to find a Hollywood film that fits his taste and schedule. Currently, he is “breaking the ice", which means reading two scripts a week and giving feedback so that he and his Hollywood managers can “get to know each other".

He said he is hopeful that Jodhaa Akbar will be a first step in expanding the traditional fan base, and UTV Motion Pictures, the co-producer and worldwide distributor of the film, is pushing hard to make sure that it does. Theatrical trailers were released globally as early as September.

“Of course we are relying on South Asian viewers," said Siddharth Roy Kapur, the director of UTV, in a telephone interview.

“But this is the perfect film for anyone who is curious about Bollywood. It has scale, stars, drama, song and dance."