The decade in literature

The decade in literature

The book business encompasses three universes that overlap substantially but have distinct identities and histories. These are: publishing (the book as a physical object, the mechanics of book editing, design and printing, the size of the market and the quality and diversity of the publishing houses within it), book selling (the bookshop as a site for browsing and buying, and as a cultural space, the distribution networks of publishers, book launches and other publicity methods), and, less tangible than the other two, but the thread running through it all—the idea of literature, of a reading culture. This is the acknowledged potential of the written word, deeply considered by an individual writer and then sifted through multiple quality-control filters, for nuanced thinking that calls on all the riches of language, unforgettable verbal patterns, provocative ideas or narrative methods, world-changing argument or a defence of the status quo, spiritual elevation or thrilling timepass, for a mirror on the world or a vision of an alternative world. 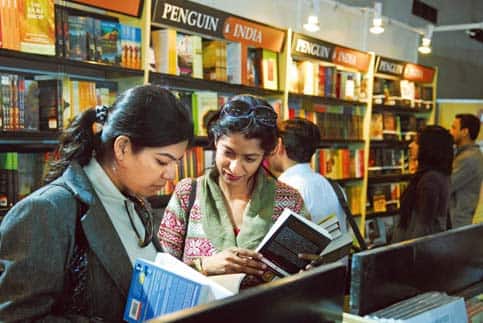 Print culture: A file photo of people visiting a book fair at Pragati Maidan, New Delhi. The trade book market (which comprises books published for the general reader, and not textbooks or grew threefold between 2000 and 2010, with 15 billion books published in 2010.Photo by Pradeep Gaur/Mint

Simultaneously, the spread of the Internet, and the growth and burgeoning power of Amazon.com have precipitated a crisis for bookshops, which were previously the site where all the elements of literature came together. Meanwhile, globalization has, arguably, made “literature" a bigger and richer space for most serious readers, making more kinds of books more easily available to more readers, permitting old books to be sold alongside new books, and allowing readers, through the Internet, to have a stronger say in book discussion and, thereby, sales.

India’s book economy is on a different arc, however, and, like the Indian newspaper industry, is still on its way up rather than down. For an observer of Indian literature in English, the last decade was full of bright lights on all three counts of publishing, book selling, the density and internal diversity of the idea of literature, and the spread of a reading culture. (For the purposes of this essay, I include under “Indian literature in English" both work originally written in English and that translated into English).

We might think of this decade as one in which Indian literature went forward and expanded outward at the same time, bringing into its embrace many of the literary riches of its past and present that were hitherto restricted to specialists or speakers of a particular regional language (see, for instance, the box on the Clay Sanskrit Library project). As the hub of the many literary cultures that make Indian literature the most complex and multilingual national literature in the world, Indian literature in English has a huge responsibility, one that it realized better this decade than in any one previously.

The birth of many new publishing houses and imprints in the last decade, the explosion in the number of books published, the increase in the number of bookshops (particularly the big chains such as Crossword, Landmark and Odyssey), and the growth of the online book trade all point to one thing. The book business is growing rapidly. Further, many more players have a slice of that pie than was the case 10 years ago. A number of major English trade publishing houses in India appeared over the last decade, with major new players such as Random House, Westland Books, Hachette, Navayana and Srishti claiming a share of the trade even as they helped increase its size with their distinct emphases.

Widening Internet penetration has stimulated e-commerce, allowing readers in places without bookshops to buy books, and even those in areas with bookshops to access a much wider range of books or buy books at substantial discounts. Online book selling, almost negligible in 2000, now accounts for about Rs100 crore worth of business every year, divided up between players such as Flipkart (where I do most of my shopping), Rediff and Indiaplaza.

The physical Indian bookshop, though, with some honourable exceptions, continues to be a disappointing place for the serious reader. Stocking an inadequate range of titles and manned by staff who have no real interest in or knowledge of books, bookshops in India don’t yet manage to fulfil the publisher Andre Shiffrin’s idea that “the good bookshop doesn’t just have the book you want, it has the book you never knew you wanted".

A great part of the appeal of books, we must remember, is their allure as physical objects: the way they are designed, bound, typeset. This was the decade in which, for the first time in India, books as objects met world standards. When I was a literature student in the year 2000, it was possible to distinguish a book published by an Indian publisher from a foreign one just by taking a look a it. This is no longer the case, and Indian bookshops now take pride in a wealth of books by Indian writers that don’t just read well, but look great. If there is something that Indian publishing needs now, it is better editors. To this book reviewer, too many Indian books are currently let down by their sloppy English: hoary cliches, confusing syntax, superfluities, stilted dialogue, clumsy metaphors, unselfconsciously purple prose.

Indian literature itself occupies a much larger place in world literary consciousness than it did at the beginning of the decade, with a small raft of big Indian names giving way to a whole schooner of exciting voices. Indian novels in English no longer exhibit the self-consciousness of most earlier works in the language, and good new novels appear now not in their ones and twos, but at the rate of a couple of dozen a year. Unfortunately, writers in English have a much greater chance of being published in markets outside India (something that distorts foreign perceptions of Indian literature). This is slowly changing, but it may take another decade to take full effect. The revolution must begin, however, by more Indian readers consciously seeking out literature in translation.

Another pointer to the maturation of Indian literature in English this decade was the emergence of genre fiction of various kinds, from thrillers to chicklit to campus novels to pulp fiction in translation, thereby opening out the market for Indian fiction dramatically and bringing in readers hitherto deterred by or unsympathetic to novels. Most of these books don’t yet meet the standards of the educated reader of literary or genre fiction (and some, as Aadisht Khanna pointed out in a hilarious piece in Mint Lounge in September, are so bad they’re good), but they are part of the story of Indian literature this decade as much as an Amitav Ghosh or Aravind Adiga.

As a sign of India’s growing power within the world of Anglophone fiction, the decade was also marked by the establishment of a number of indigenous prizes for Indian or South Asian works of high literary merit. The Crossword book awards, established in 1998, were joined this decade by the Man Asian Literary Prize, the DSC Prize for South Asian Literature, the Hindu Best Fiction award and the Shakti Bhatt First Book award. While still putting down roots in the Indian book world, these prizes allow us to envisage a day when these, rather than overseas stamps of recognition such as the Booker, will be seen as the primary arbiters of Indian literary merit.

Book coverage in mainstream newspapers and magazines, though, is not noticeably better than it was in 2000. This is one of the last missing links in the maturation of Indian literature, for without robust literary debate and the reasoned evaluation of books, literature is hamstrung both at the level of its influence in the public sphere and its power to reach new readers and widen the tastes of existing ones.

Currently, Indian literature is more deep and diverse than it has ever been, but no one newspaper or journal—perhaps not even all the periodicals collectively—is able to take full stock of this on its pages, and many outstanding titles (particularly academic publications, books from small presses, and works in translation) come and go without a trace.

Chandrahas Choudhury is the author of the novel Arzee the Dwarf (2009), recently listed by World Literature Today magazine as one of 60 essential English-language works of modern Indian literature. His forthcoming book is India: A Traveller’s Literary Companion (HarperCollins, January 2011).