Finding people who know how to write for pleasure is difficult

Finding people who know how to write for pleasure is difficult

Take some werewolves, add a vampire and season it with liberal splashes of forbidden love. Sauté and stir. What’s this a recipe for? Mass hysteria in teenage girls. And what good does that do? It helps a publishing group’s start-up venture in India zoom up to the second spot. Hachette India, the publishers of Stephenie Meyer’s Twilight saga is now the second largest publishing house (of non-educational books) in the country, trailing only the behemoth, Penguin.

Thomas Abraham, managing director, Hachette India, talks to Mint about the surprising phenomenon that is the Twilight and what and how we are likely to read in the future.

At the beginning of last year, did you imagine vampires and werewolves would take you to the second spot so soon? 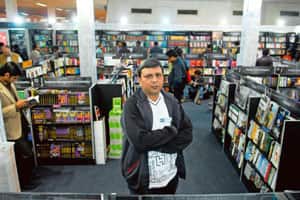 What kinds of books sell more in India?

In India there are three or four bands of books. The books that sell at least 3 lakh copies would now be Chetan Bhagat’s and Gregory David Roberts’Shantaram. Then you drop to the 1 lakh bracket which will have books such as The World is Flat, Freakonomics etc. The third band is 50,000-75,000 copies and here you would find Sidney Sheldon, Paulo Coelho and others.

What kind of Indian writing can we expect to see this year?

Our thrust will be on Indian writing. We will do both literary and serious non-fiction. But our brief is to find and plug gaps in the commercial thriller segment. Look at techno-thrillers, like Michael Crichton’s books. When can we ever hope to write something near that—steeped in science, steeped in technology? This has been my constant theory, that you should judge a market by its commercial segment, and not by literary segment. You can get an outstanding literary book out of Mongolia or Rwanda. Social suffering will produce great works. Whereas, in the entertainment segment, finding people who know to write for pleasure is difficult. We are just starting that.

The other huge gap is in books for children. In 60 years since independence, we have one brand—Ruskin Bond. And even he is not as big a seller as you would think, he probably sells less than 7,000 copies. So there’s a long way to go in children’s book writing. That market is so fragmented, there is no discernment, no differentiation.

Who is the new Indian reader?

The new Indian reader is, actually speaking, quite depressing. He is what I call the reader of the “alumni fiction"—books that are about “what I did in IIT", “what I did in IIM." These are really badly written books, but they have a huge market. People ask us why we don’t do those books and my theory is that if we put in our editorial input and rewrite it , it won’t do so well. They are often grammatically incorrect and written in bad English. But the truth is it’s the same English that the huge population outside speaks. So that’s where it is striking a chord. If that is the new Indian reader, then my hope is that they use that as the stepping-stone and then move up to better literature. Apart from that, the new reader is for narrative non-fiction. All the blockbusters are actually from there. The World is Flat, Freakonomics kind of popular economic and self-help books. I suspect there is some aspirational tie-up there—this whole Indian thing of wanting to get ahead and these books being seen as aiding that.

I suspect 2010 will be more or less a run on this. I hope K.P. Singh’s Raisina Trilogy, a political thriller we are doing, will be a surprise. It’s in the whole commercial storytelling, Jeffrey Archer, kind of category. But the biggest surprise I am hoping for is that we’ll have author brands in childrens’ books emerging from Rupa or some other publishing house. ChickLit is consolidating in the market. Graphic novel stands revealed as not being the next big thing.

What will be Hachette India’s focus now?

Our focus will be building our local list—we are just about 12 books strong. We are in danger of having our growth outstrip our infrastructure—which is process, systems etc. So next year’s focus will be a mix of internal housekeeping and bolstering our local lists. This year we will probably do 25-30 Indian books. I don’t want to do more than 50 or 60 books. I have seen it in Penguin where they do 200 and I don’t believe in it. I’d rather have books that editors and sales people have time to focus on. Less books but more sales than the other way round.

What are the challenges of being a publisher in India?

The first challenge is margins. In the UK and the US, the publisher would multiply the cost by 10 or 12 times which gives the marketing money needed. Here our multiplier is 2.5 to 3, if you are lucky you can take it up to 5. This is because you can’t take up prices. Book prices have been static for almost 10 years. Price of burgers and movie tickets have gone up 200-300% in the last 10 years. Book prices have?been flat at Rs250 or Rs295. This stranglehold has been counterproductive for both bookselling and publishing. In fact, books that have gone past this have actually proved the reverse. The Harry Potter books broke every rule in pricing, but they sold. Meyer sells at Rs350, Shantaram sells at Rs495. So I don’t think those old arguments are valid any more.

Second is the writing pool. There is a small limited pool of established writers. Everybody is looking for the next big thing. While we are looking, the established pool is pushing advances up. In the last year and a half, advances have been insane. There is no way any of those writers, including Vikram Seth, can recover that money for the publisher. So we have gotten into a game of building lists with loss leaders, which luckily we don’t have so far at Hachette. (Knocks on wood and topples the dictaphone over).