New Delhi: Artificial intelligence (AI) is one of the top themes this year among consumer trends as consumers see it playing a more prominent role than before, according to Ericsson’s annual trend report, ‘The 10 Hot Consumer Trends for 2017 and Beyond’, which was released on Wednesday.

1. AI is everywhere: 35% people want an artificial intelligence (AI) advisor at work and even though more than two in five are against it, almost one in four would even like an AI as a leader of a company. But while consumers see possibilities with AI, they also worry about risks; almost half of respondents are concerned that AI robots will soon make a lot of people lose their jobs.

2.Setting the pace for IoT: Consumers are increasingly using automated applications and gradually discovering how Internet-of-Things (IoT) can support their needs. Two in five advanced Internet users believe their phones will soon learn what we do and perform activities for us automatically, and smartphones could soon interact with a wealth of other devices on our behalf. One in two smartphone owners believes he will be able to talk to household appliances, while almost three in four believe multiple wearables and sensors will help them interact with other devices and physical things around them.

3. Pedestrians drive autonomous cars: Car drivers may not exist in the future. When crossing a street, pedestrians are more vulnerable than other traffic subjects. For this reason, one in four pedestrians would already feel safer today if all cars were autonomous. And 65% of those who say so would also prefer to have an autonomous car rather than one they have to drive themselves. Interestingly, many advanced Internet users also want self-drive functionality when walking. Two in five want their phone to warn against obstacles, and one in three even wants street signs and lights embedded in pavements. It won’t save lives, but at least it could help pedestrians avoid bumping into each other because their eyes are locked on to their smartphone screens.

4. Merged reality: Just like Internet use has become inseparable from many physical activities, the same may happen with VR (virtual reality) and AR (augmented reality). Almost four out of five of those who use both fixed and mobile VR believe these experiences will be indistinguishable from physical reality in only three years. Further, three in five of them already consider online meetings to be like meetings in real life, while less than a third of non-VR users think so. Half of the respondents are also interested in gloves or shoes that allow you to interact with virtual objects as if they were part of the physical surroundings.

5. Bodies out of sync: As autonomous cars become a reality, car sickness issues will increase, and three in 10 foresee needing sickness pills. One in three also want motion sickness pills for use with virtual and augmented reality technology. 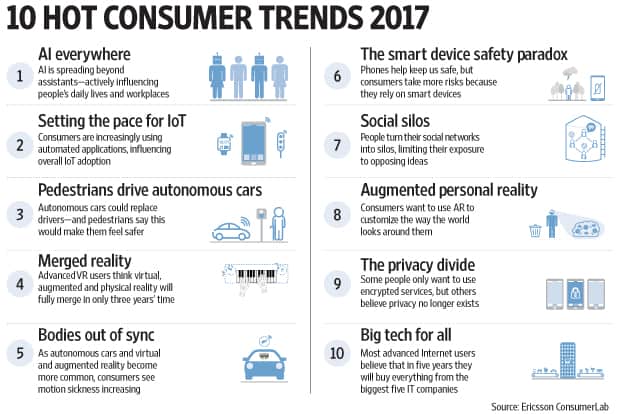 6.The smart device safety paradox: More than half already use emergency alarms, tracking or notifications on their smartphones. Another three in five have emergency contacts stored in their phone. But what happens if you lose your phone while still looking for your destination? Or you have an accident in a remote area of town while your phone is not charged? In many ways the basic features of your smartphone can make you safer—and around two in five citizens in five major cities surveyed agree. But here’s the paradox: three in five of those who say so take more risks because they rely on their phones to keep them safe.

Of those who say their smartphones make them feel safer, three in five say they take more risks because they rely on their phones.

7. Social silos: Today, people willingly turn their social networks into silos. As many as one out of three says that social network is the prime source of news, and only one out of four thinks that established news channels and newspapers can always be trusted to be accurate. In fact, 28% say that their contacts are a more reliable source of information than what is said on TV, radio and in newspapers. This line of thinking extends to political views as well. More than one in four think their contacts’ opinions are more important than what politicians say.

8. Augmented personal reality: Over half of people would like to use augmented reality glasses to illuminate dark surroundings and highlight dangers. More than one in three would also like to edit out disturbing elements around them.

9. The privacy divide: Most major messaging apps now offer end-to-end encryption and some even have it as the default setting. This is good news to many, as two in five want to use encrypted services only. Another 46% say they really need the encrypted protection these services offer. But consumers are divided over this. One in three advanced Internet users believes that governments should be able to access any personal data, including their own, in order to fight crime and terrorism. And 45% think that companies should always comply when authorities ask for data about their customers for such purposes. Two in five advanced Internet users want to use only encrypted services, but people are divided. Almost half would like to have just reasonably good privacy across all services, and more than one out of three believe privacy no longer exists.

10. Big tech for all: More than two out of five advanced Internet users are interested in having the biggest IT companies provide them all the products they need, across all types of product categories—from care to cars. As a result, traditional companies need to reinvent themselves as IT companies very quickly. In fact, three in four advanced Internet users who are open to the idea believe the biggest five companies will provide all products they need in only five years’ time.