New Delhi: Sports broadcaster ESPN Software (India) Pvt. Ltd is preparing to flag off a high-voltage campaign to promote two big-ticket cricket tournaments that will be aired on its Star Sports channel, taking the cue from the marketing formula that made the Indian Premier League (IPL) such a big success.

The broadcaster has lined up a Rs100 crore marketing campaign across media platforms to boost viewer and advertiser interest in the International Cricket Council’s (ICC) Champions Trophy in September and Champions League in October, said a senior executive from a media buying agency who didn’t want to be named. 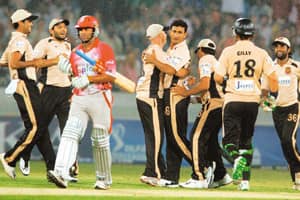 Strategic play: A May 2008 photo of Deccan Chargers celebrating the dismissal of Kings XI Punjab’s Ram Naresh Sarwan during an Indian Premier League Twenty20 match in Hyderabad. ESPN has taken the cue from the marketing formula that made IPL such a big success. PTI

ESPN is selling 10-second spots for around Rs3 lakh each for both tournaments, but is offering a 15-20% discount to advertisers who come on-board both tournaments, said another senior media buyer involved in negotiations with ESPN.

Although the Board of Control for Cricket in India (BCCI) is not launching a separate advertising campaign to promote the Champions League, as it did for IPL’s inaugural edition with broadcaster Multiscreen Media Pvt. Ltd, the board is working closely with ESPN on several marketing initiatives, said Sundar Raman, a member of the BCCI governing council and chief executive of IPL.

“We have a communication plan in place that aims at bringing back the hope and winning spirit to India after a disappointing run at the World Cup, and since the tournaments are taking place during the festival season, we added the country’s biggest festival, Diwali to the mix," said Nirmal Dayani, senior director (marketing) at ESPN.

“The campaign tag line, ‘Diwali hogi cup wali’ communicates a promise of victory and aims to add to the festive spirit," Dayani said.

The campaign includes television commercials of varying duration for which space is currently being negotiated across channels, as well as strategic tie-ups with news channels, radio stations and coffee houses to reach viewers, said Ruchi Mathur, director at Mindshare, the media-buying and planning agency for ESPN.

As if cricket and Diwali didn’t make a potent enough combination, ESPN has also added the glamour quotient of Bollywood to the marketing mix.

“We have also added the Bollywood dimension to our marketing plan by tying up with some film releases and cross-platform promotions. There will be a star-cast involved in our communication, but names and details of this plan cannot be disclosed yet," said Dayani.

Apart from the joint marketing initiatives, a separate media plan is being designed specifically for the Champions League, which will include a new set of television commercials and a strong focus on local media such as outdoor hoardings and radio.

“Champions Trophy is already an established format, but Champions League is a new format and its success to a large extent will depend on how ESPN markets it," said the first media buyer mentioned earlier. “A significant chunk of the Rs100 crore campaign will go into familiarizing viewers with the names of the domestic leagues of Australia, England and South Africa participating in the tournament."

A music video by A.R. Rahman produced for the Champions League in 2008, which could not be held because of the Mumbai terror attacks in November, will also be resurrected and modified to suit the current campaign.