New Delhi: The spat between the Indian Premier League (IPL) and its broadcast partner Multi Screen Media Pvt. Ltd (MSMPL) over an on-ground sponsorship deal seems to have been resolved.

According to two people close to the development, in a tripartite arrangement, MSMPL has agreed to compensate IPL “partially" for the loss of Rs137 crore on account of Reliance Big TV, the direct-to-home (DTH) arm of Reliance- Anil Dhirubhai Ambani Group, pulling out of the on-ground sponsorship deal with IPL. The IPL management has also decided to make a “new discounted" offer to Reliance Big TV. 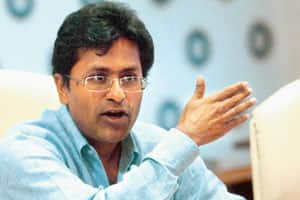 All’s well: IPL commissioner Lalit Modi says he is in talks with MSMPL and is confident that the operational issues will be amicably resolved to the satisfaction of all the parties concerned. Shashank Parade / PTI

The Board of Control for Cricket in India (BCCI) has also clarified that the broadcast rights for IPL continue to be with MSMPL, and while the sponsorship related issues were being resolved, there was no move to withdraw the rights or to give them to a third party. “There is no question of us moving up or down the IPL rights to any other channel. It was never an option," said Lalit Modi, commissioner of IPL, which is owned by BCCI.

In a separate note clarifying the issue of Reliance Big TV sponsorship, he added: “We are jointly working with the management team at Sony (MSMPL was formerly known as Sony Entertainment Television) to address this and we are confident that we will be able to amicably resolve the operational issues to the satisfaction of all the concerned parties."

Rohit Gupta, head of network sales, MSMPL said the issue had been resolved. While both Modi and Gupta refused to comment on the discussions, a senior IPL executive and a media buyer close to the sponsorship deal in question, said MSMPL had agreed to compensate BCCI “partially".

“At a time when advertisers are anyway scarce, a Rs137 crore loss is massive," said the media buyer. “IPL has asked Sony to compensate a certain amount and they will most likely get Reliance DTH back with a second, more lucrative offer."

Without disclosing the exact amount of compensation sought by BCCI, he said, “It would not be more than Rs50 crore, otherwise it would affect Sony’s returns."

A spokesperson for Reliance Big TV, meanwhile, said: “We are waiting for a formal second offer to come in from Sony and IPL...it should come in by next week."

In August last year Reliance Big TV outbid its rival Airtel Digital TV for the so-called on-ground (or in-stadia) sponsorship rights for IPL for Rs137 crore for the next four years. But the company walked out of the deal when Airtel Digital TV reappeared in January as an on-air sponsor with MSMPL.

According to IPL’s sponsorship guidelines, the on-ground sponsor has the first right of refusal for television rights, and only if it refuses, can the rights go to another party.

MSMPL’s Gupta said the broadcaster had approached Reliance Big TV with its offer first, but the Big TV spokesperson said, the company did not accept the offer because it was too steep.

The desperate efforts on the part of BCCI to retain Reliance Big TV reflect the cricket board’s inability to get new sponsors for its two vacant slots of ground sponsors. In the wake of the current economic slowdown, most advertisers are being extremely cautious about committing huge sums to marketing and promotions. “There are two vacant slots to fill and although there are several advertisers who have approached us, they are not ready to pay the price being asked for," said the IPL executive.

According to him, the board has pegged the new sponsorship rights at $7-7.5 million against $5-6 million last year. Last year’s on-ground sponsors for IPL inlcuded Vodafone, Citibank and Hero Honda while real estate company DLF was the title sponsor for the company.

There was a speculation in the market recently that DLF wanted to pull out of the sponsorship because of its internal financial constraints. Modi, in his note sent on Friday, clarified that “...all our sponsors and partners remain resolute and steadfast in their commitment to the DLF Indian Premier League. They are all very much still on board and not a single partner has pulled out."