Colombo: Sri Lanka’s Kumar Sangakkara was dismissed for 18 in his final international innings, ending a remarkable 15-year career during the second Test against India in Colombo on Sunday.

A full house of around 7,000 was in attendance at the P. Sara Oval to watch the fifth-highest run-getter in Test history play for the last time as Sri Lanka chased a tough victory target of 413.

Sangakkara did not have to wait long in the dressing room after the hosts lost opener Kaushal Silva in the third over, tapping a full toss from Ravichandran Ashwin to the short mid-wicket fielder. 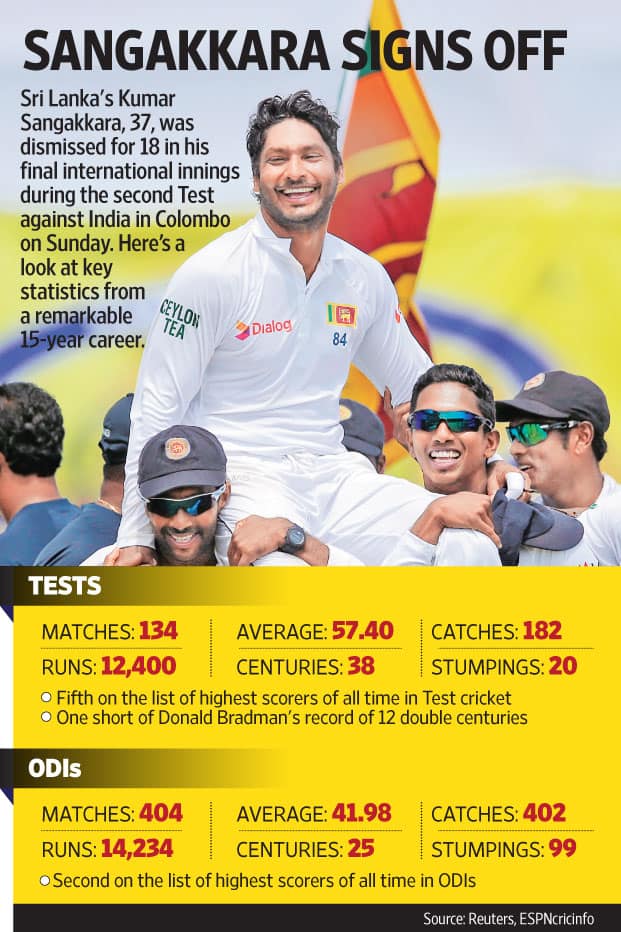 The crowd applauded warmly as Sangakkara was welcomed to the crease by two guards of honour—one formed by young children with raised bats near the boundary and another by Indian fielders.

The left-hander began by flicking the first ball from Ashwin for two runs and then clipped seamer Ishant Sharma off his pads for his first boundary.

Sangakkara hit two more fours, but fell to Ashwin for the fourth time in as many innings in the series when he edged a catch to Murali Vijay off the 18th ball he faced.

The Indian fielders shook hands with Sangakkara as he walked off for one last time to a standing ovation from the crowd.

“Thank you for all the love," Sangakkara wrote on his twitter feed @KumarSanga2 soon after play ended. “Been my privilege to play for my country and in front of all the fans."

Sangakkara finished with 12,400 runs from 134 Tests at an average of 57.40. He scored 38 centuries, including a best of 319 against Bangladesh in Chittagong last year.

Tendulkar, who retired in 2013, tweeted: “Well played @KumarSanga2. You have been a terrific ambassador for the game and a thorough gentleman. Warm welcome to the club of the retired!"

Former team-mate Mahela Jayawardene, with whom Sangakkara shared a world record partnership of 624 against South Africa in 2006, said he was proud of his close friend’s achievements.

“It wasn’t to be in this match but what he was for Sri Lanka cricket is something that you can’t take away. Very proud of you mate," Jayawardene wrote.