Thanks for Visiting Mint
You seem to have an Ad Blocker on. Please turn it off in order to continue, or whitelist Mint
HOW TO TURN OFF AD BLOCKER
OR
REFRESH IF YOU ALREADY TURNED OFF THE AD BLOCKER
Home >Industry >Unmukt Chand | India is moonstruck with its boy wonder

Unmukt Chand | India is moonstruck with its boy wonder

Unmukt Chand | India is moonstruck with its boy wonder

During the final of the ICC Under-19 World Cup in Townsville, Australia, the Indian side was chasing Australia’s total of 225. Chand, India’s captain, was finding the boundary with unhurried ease, flowing smoothly towards a century.

At his house in Delhi, the atmosphere was a little more frantic. Neighbours, family members and reporters thronged the Chand family’s modest apartment for the final. Some were gathered around a big screen set up in the apartment complex’s basement for the final. Television broadcast vans were jostling for parking space.

Bharat Chand, the boy’s father, was instructed not to change his seat throughout India’s innings and, despite his scepticism, he complied. Even when Chand hit a six to bring up his century, his father remained in his seat, though his heart jumped with excitement. 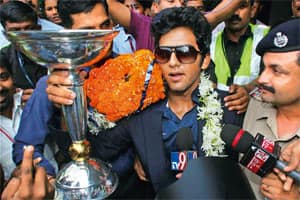 Fast track: Things are moving rapidly for Unmukt Chand, and the Under-19 World Cup win will only accelerate the pace of his career. Photo: Mitesh Bhuvad/PTI

“Everything exploded," Chand Sr says. “Suddenly there were drums, dancing, fireworks, reporters dragging me left and right." Things got so out of hand that Chand’s parents couldn’t call him until late that night, almost 12 hours after the Cup was won. By then, their son was a star. He had given more interviews in a few hours than he had in his entire life, been shown lifting the trophy countless times on TV, and still found the time to go to the restaurant where the losing Australian side was dining to play a few rounds of pool with his opponents.

Like most young boys in the country, Chand, now 19, started playing cricket when he was six. Chand Sr, a middle school teacher in Delhi, would dutifully take him to a nearby park every evening after school. “Cricket kit, plastic wickets, me, and my boy on a scooter," he says. Chand Sr’s brother Sunder Chand, a journalist now living in Mumbai, joined them for these sessions.

Chand would delight in whacking the ball to the border hedges, according to the two men. His innate talent was already apparent. Teenage boys would queue up to bowl at him and test his mettle. “Unmukt would drive and cut them," Chand Sr says, “and the kids would bowl faster and faster. It was a thrill for everyone to see a kid that young playing like that."

As for any child flush with talent, the game had already become an obsession with Chand.

Stories of Chand’s early commitment to the game abound in his family. “One of my strongest memories," says Chand, “is that when I was eight, I was hit by a ball on the nose and there was blood everywhere. My father came running up to me, very concerned, and he wanted to take me back home. I didn’t want to stop playing. So I put a handkerchief to my nose till the bleeding stopped, and five minutes later, I started playing again."

By the time he was 10, Chand’s parents and his uncle began seriously plotting a career for him in cricket. He was enrolled for early morning swimming classes to develop strength and stamina, and a cricket academy in the evenings to hone his skill.

“I loved it," Chand says. “It did not feel like I was living a regimented life or anything. It’s exactly what I wanted. And my parents and my uncle were like my friends. They gave me all the help and support I needed."

Soon, Chand’s discipline and talent began to pay dividends. He made it to the Delhi Under-15 team, and then the North Zone Under-16 team, and started training under Sanjay Bhardwaj, the coach of India’s opening batsman Gautam Gambhir.

“He has amazing self-belief and perfect temperament," Bhardwaj says. “When he was 15, I told him, ‘Look, if you keep working this hard, you’ll be playing the Ranji Trophy in three-four years.’ He made it to the Delhi Ranji team next year." Chand was in Class XI when he made his precocious Ranji debut, and he scored his maiden Ranji century (151) in just his fourth match.

“I’ll be less cautious this time and say that Unmukt will make it to the Indian team by next year," Bhardwaj says.

Bhardwaj is not alone in his optimism. Former Australian captain and commentator Ian Chappell has said that Chand should be fast-tracked into India’s senior squad, since the junior level is not enough of a challenge for him any more.

“It feels great to hear things like this," Chand says, “but I try not to think of such things. Of course, I’m nervous and excited, and I think sometimes what it would be like to play for the senior side, but mostly, I focus on what I’m doing right now, and right now, I have to keep performing."

Things are moving rapidly for Chand, however, and the Under-19 World Cup win will only accelerate the pace of his career. Clashes between his playing schedule and his classes at St Stephen’s College in Delhi have already caused a controversy. The college has stopped him from advancing to the next year of his graduate programme due to his poor attendance.

Last year, he was the youngest player in the Indian Premier League, when he made his debut for the Delhi Daredevils. He finished his Class XII board exams on 8 April, and played his first match on 10 April. He was out on the second ball he faced, from one of the world’s best bowlers in the format, Sri Lankan Lasith Malinga. “Later, he told me that he was very nervous," says Chand Sr. “But not because Malinga was bowling to him—he didn’t care about that. He was nervous because of the large crowd, which he had never seen before, and all he could think of was ‘What if my friends from school are in the crowd?’"

The hardest yards lie ahead for Chand. As a rule, few players manage to match their Under-19 success at the senior grade, but Chand’s own role-model is an exception. Delhi batsman Virat Kohli captained India to victory in the 2008 Under-19 World Cup, and has successfully stepped up to the senior level.

“Virat told me it took him a lot of time to understand his own game," Chand says. “He told me that this is most important—to be self-aware, to really know your own game. But at the same time, you can’t be scared. You have to believe in yourself."