New Delhi: Ad spending in India will grow 15.5% in 2016 to ₹ 57,486 crore with digital advertising expanding at the fastest pace of 47.5%, media agency GroupM, part of global advertising group WPP Plc., said in its This Year Next Year report released on Tuesday.

“India is the fastest growing ad market among all the major markets of the world. 2015 was the best year for ad spend growth we’ve had in the last five years," said C.V.L. Srinivas, chief executive at GroupM South Asia. “While global headwinds are building up in the new year, there are a number of positive factors that will help the Indian ad sector grow at higher levels in 2016."

Consumer product, automobile and e-commerce companies will continue to drive growth (as they did in 2015) and telecom, banking and finance, and the government sector will join the party, according to Srinivas. Growth is also expected to get a fillip from events such as the T20 World Cup cricket tournament, Indian Premier League (IPL) and state elections. “While digital media will remain the fastest growing platform, India is one of the few large markets where all traditional media platforms will show positive growth," added Srinivas. 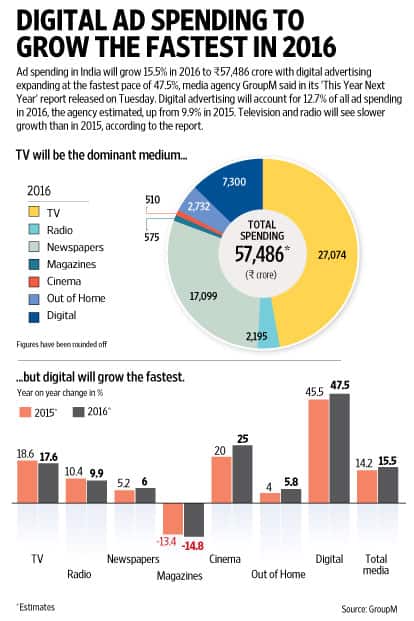 A better year for print

The big story in 2016 is that print is expected to have a better year compared to 2015. Print advertising will expand 6%, compared to 5.2% last year.

“The increase in ad spends expected from print-heavy sectors like auto, banking and finance and the government sector augurs well for newspapers. Regional advertising of telecom and consumer product brands will benefit language dailies," said the report.

The pace of growth in print advertising may have slowed, but the medium is continuing to deliver results for advertisers, said Rahul Kansal, executive president, Bennett Coleman and Co. Ltd that publishes the The Times of India and The Economic Times.

Television and radio will see slower growth than in 2015.

“The radio sector will continue to grow at about 10% for existing stations in key markets like Delhi and Mumbai. However, radio companies are struggling with limited ad inventory which is only expected to grow once the new radio stations acquired through the Phase III auctions are set up," said Harshad Jain, chief executive at Fever 104, run by HT Media Ltd, the publisher of Mint.

The GroupM report suggests higher radio advertising growth towards the end of 2016. “There is scope for the medium to pick up towards end 2016 when most of the new stations (set up after Phase III licenses, round 1 were issued) are fully operational," it said.

The electronic auctions of the first batch of the Phase III of FM radio auctions that ran 125 rounds and lasted 32 days concluded in December last year. They had on offer 135 channels in 69 cities.

The total value of sold channels was ₹ 1,187 crore. However, the government made more than ₹ 3,000 crore from these auctions, including the migration fee from 245 stations that will move from Phase 2 to Phase 3. 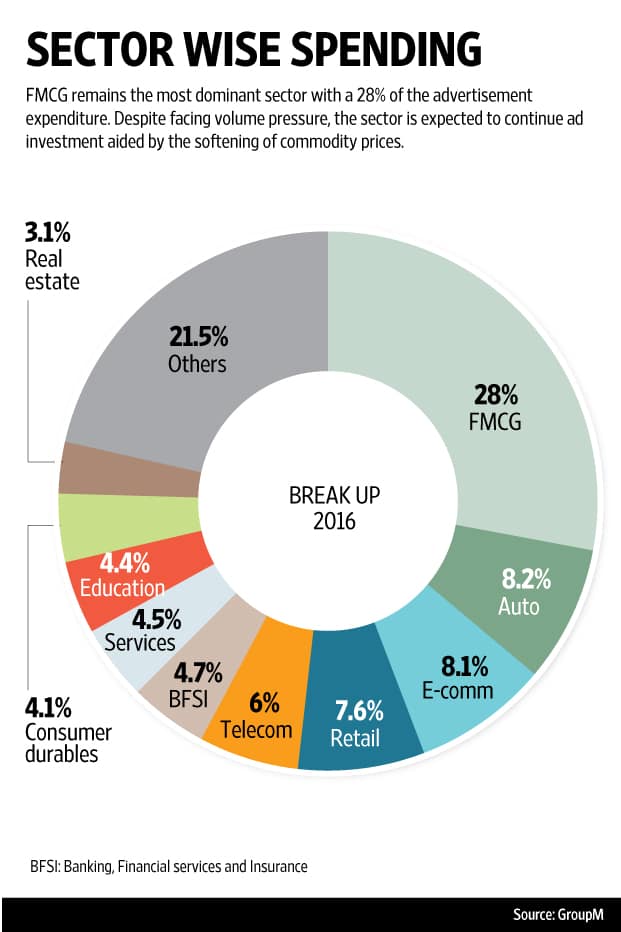 According to GroupM, digital advertising spending will touch ₹ 7,300 crore on the back of higher investments in cross-screen campaigns. The agency expects Video on Demand (VOD) services to gain popularity in India.

The Asia Pacific region is expected to overtake Western Europe as the second largest market for VOD services by 2020, fueled by the rapid proliferation of smartphones in China and India.

With the recent Netflix service launch in India, several domestic and international firms will actively market their VOD services and acquire customers in the next 12 to 24 months.

“In a young country like India media habits are shifting towards digital and social. 2016 promises to be fabulous. Brands will question the role of tactical usage of digital media and it’ll become more strategic. It’ll continue to be an integrated world with social first campaigns getting more dominant," said Anusha Shetty, chief executive at Autumn Worldwide, a Bengaluru-based social media marketing agency.

According to the GroupM report, consumer product makers will remain the most dominant sector in terms of ad spending with a 28% share of the total expenditure. Many advertisers will increase their ad spending to spur demand, helped by the buffer provided by low commodity prices, which have reduced their input costs.

E-commerce firms will continue to burn money on traditional media, spurred by increasing competition and the existential drive to increase market share. GroupM sees traditional retailers increasing their own presence online. With advertising becoming a new revenue stream for companies such as Flipkart and Amazon, the digital medium will see increased activity, the report explained.

The launch, and further roll-out of 4G services will see telcos splurge on advertising and marketing.

These 4G network launches will be complemented by the launch of new devices, the report pointed out.