Forget ‘all the world’, Bengal surely ‘is a stage’

Kolkata: Dawsh bochhorer kaaj kortey hobey dawsh diney," says the actor playing Macduff in a Bengali version of Shakespeare’s Macbeth and the audience roars in response to a line of dialogue that isn’t out of place in today’s West Bengal: “The work of a decade is to be done in 10 days." 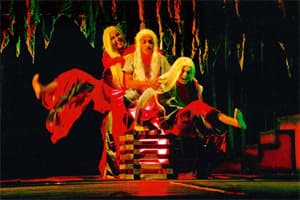 Enacted reality: A file photo of the play Macbeth being performed by a theatre group in West Bengal.

Macbeth’s director Kaushik Sen attributes this to a “moral compulsion" to “educate people about the changes that are now unfolding".

Indeed, the new government, headed by the mercurial Mamata Banerjee, sees plots to destabilize it everywhere and has reacted harshly to criticism, going as far as arresting a chemistry professor for forwarding a cartoon (and not a particularly funny one) about the chief minister. Banerjee herself displayed her paranoia by walking out of a televised interview with students after accusing a questioner of being a communist.

A “similar paranoia" exists in Julius Caesar, says Chandan Sen, who first planned to adapt the play in 2007 to critique the Left Front’s “intolerance and arrogance". “I see similar reflections again," he says.

So much so that neither the original plots, nor the dialogue, needs to be altered. “We are closely following the (Shakespearean) text," he adds.

Apart from Macbeth and Julius Caesar, at least three more plays of Shakespeare—Hamlet, King Lear, and Romeo and Juliet—that have been adapted and loaded with political statements are running to packed houses in Kolkata.

Already the staging of Raja Lear (the adaptation of King Lear) has been disrupted— shows scheduled for this month had to be called off because the bookings at the state government-owned Rabindra Sadan were cancelled by the auditorium authorities without citing any reason.

West Bengal’s education minister Bratya Basu, a theatre personality himself, refused to take calls. Arpita Ghosh, a member of the state cultural committee, was unavailable due to health reasons.

“Unbelievable—at least this decision is not for the people," wrote Suman Mukherjee, the play’s director, in a Facebook status message, reacting to the cancellation.

Popular plays loaded with political messages have always been around in West Bengal, but there was a spurt in their numbers around five years ago, following police firing on farmers protesting against land acquisition for a now-aborted industrial project in Nandigram. The communists were then on the receiving end.

The face of power has changed and nothing else, says Kaushik Sen. “Macbeth’s successor Malcolm is surrounded by the same murderers."

While Kaushik Sen plays subtly on the Shakespearean text to put the play in the context of West Bengal’s politics, Chandan Sen throws caution to the wind and gets Mark Anthony to say in his adaptation of Julius Caesar: “You need beasts to seize power, but let power remain with you, and glorified posts of insignificance distributed among others."

Chandan Sen says it is an “intended comment" on the current political situation.

Ultimately, though, much of the credit should go to Shakespeare whose works have spawned, in recent years, a cottage industry on their relevance to contemporary leadership and management strategies. The TMC’s braggadocio after taking over is best summed up by Malcom’s comment in Macbeth: “…and what needful else/That calls upon us, by the grace of Grace/We will perform in measure time and place…"