Mumbai/New Delhi: The Delhi Police special cell’s claims on spot-fixing by three players of the Rajasthan Royals team has, once again, brought to the fore the connections between cricketers and bookies, some of whom have shady underworld connections. The three players, and 11 bookies, have been arrested and sent to jail for five days.

The case also highlights the ease with which betting on cricket matches goes on in India—where such wagers are banned—with phone apps such as Bet-Droid Viewer making it possible for just about anyone to place a bet.

And, finally, it reinforces an opinion expressed, at least in some quarters, about the insidious effect of Big Money involved in the Indian Premier League (IPL), and, by extension, the Board of Control for Cricket in India (BCCI), the richest cricket body in the world and, arguably, also the most opaque in its financial dealings.

After Thursday’s events, BCCI issued a statement saying it was shocked and saddened by the recent developments. “The BCCI has zero tolerance to corruption. We will offer all cooperation to the Delhi Police and all other authorities in their investigations in this matter. The IPL governing council has met and decided that the cricketers found involved will be dealt with severely. As of now, the 3 players viz Ankit Chavan, Ajit Chandila and S. Sreesanth stand suspended pending enquiry."

News agency PTI quoted N. Srinivasan, BCCI president and vice-chairman and managing director of India Cements Ltd, which owns the Chennai Super Kings IPL team, as saying that the scandal came as “a bolt from the blue". 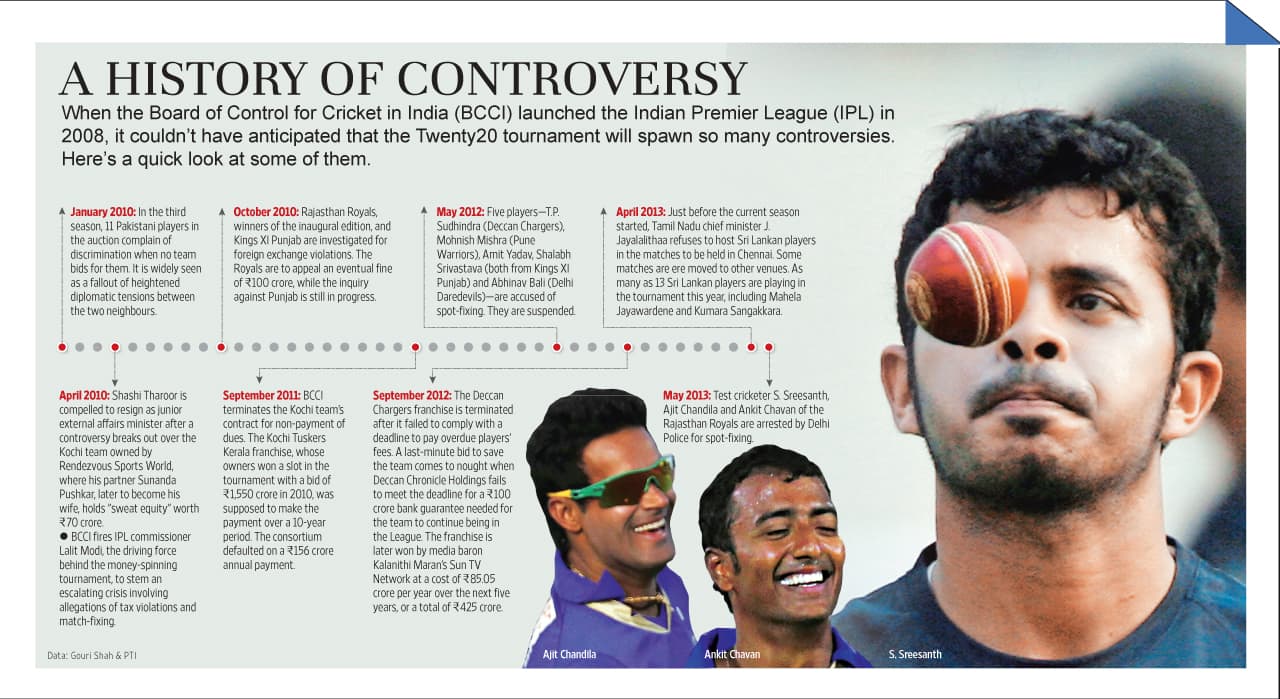 Sociologist and cricket writer Ramachandra Guha said the scandal highlighted everything that was wrong with IPL.

“The spot-fixing scandal is true to what IPL embodies—all the wrongs in sports, corporate world, media and politics as well as conflict of interests. Anyone concerned about the reputation of India’s enterprises at the international level should be worried about what’s happening. The whole thing smacks of nepotism, corruption and lack of transparency," he said in a phone interview.

It seems only apt that the claims have to do with the controversy-plagued IPL that has already seen the “death" of two teams, and a settlement with BCCI by two others accused of wrongdoing, including violations of the country’s foreign exchange rules.

The popular Twenty20 league is the embodiment of commercialization in sport, which is only to be expected in a country where cricket means big money for the sport’s administrators, broadcasters, and brands smart enough to hop on to the bandwagon. Indeed, the board, as detailed by Mint, already faces the ire of the taxman for several alleged infractions.

A decade after India and the world were rocked by allegations of match-fixing involving several cricketers, allegations that would, eventually, lead to the confession and ensuing rustication of South AfricanHansie Cronje (who later died in a plane crash), it is clear that nothing has changed.

Back then, too, the mobile phone was the instrument of choice for match-fixing. The Delhi Police claims that the three Royals cricketers were among an unspecified number of players whose phones were tapped, with the conversation then being correlated with the happenings during the match. The players and the bookies communicated over phone and through BlackBerry Messenger service and WhatsApp, the Delhi Police said.

Delhi Police commissioner Neeraj Kumar said in a press conference that the investigation was based on a tip-off about the possible involvement of Mumbai’s underworld in spot-fixing during IPL matches. He also said there was no evidence to link the owners of the teams with the spot-fixing. The conspiracy doesn’t seem to go beyond the players and the bookies, he said, although he referred vaguely to “some overseas connections".

Kumar added that the department “had not recovered cash".

The absence of a money trail may weaken the case against the three players, said a retired judge. “Delhi Police has to give strong circumstantial evidence linking transfer of money from bookies to players in lieu of spot-fixing, otherwise the case is not going to stick in the court," said retired high court judge R.S. Sodhi.

The accused have been booked under the Indian Penal Code’s section 420 (cheating) with 120B (criminal conspiracy) that invites a maximum punishment of up to seven years. The only evidence with the police is hours of recorded conversation between the players and bookies, and footage of their purported conduct.

Kumar said ₹ 40 lakh was given to Sreesanth for conceding 13 runs in his second over in the match against Kings IX Punjab on 9 May. “Sreesanth was delivered money through his friend and bookie Jiju Janardhan. Ajit Chandila received ₹ 20 lakh for spot-fixing in match against Pune Warriors on 5 May. Chandila further encouraged Ankit Chavan to accept money in the match againstMumbai Indians on 15 May. (The) players were aware of each other’s involvement in spot-fixing."

Kumar also said that no other players were being investigated, but said “more bookies will be arrested". He added: “The mastermind of spot-fixing is sitting abroad and has links with the Mumbai underworld."

Kumar didn’t name names, but the reference may be to Mumbai gangster Dawood Ibrahim, also accused in the 1993 Mumbai blasts and believed to be based in Karachi, and who has previously been involved in some cricket betting.

The arrest of the players and bookies is likely to affect the brand equity of the six-year-old league.

Since 2008, at least $1 billion (around ₹ 5,500 crore today) worth of stakeholder value has been destroyed on account of controversies, said Unni Krishnan, global strategy director at Brand Finance Plc, a brand valuation consultancy. “The latest set of incidents is another self-inflicted wound on the overall IPL ecosystem." 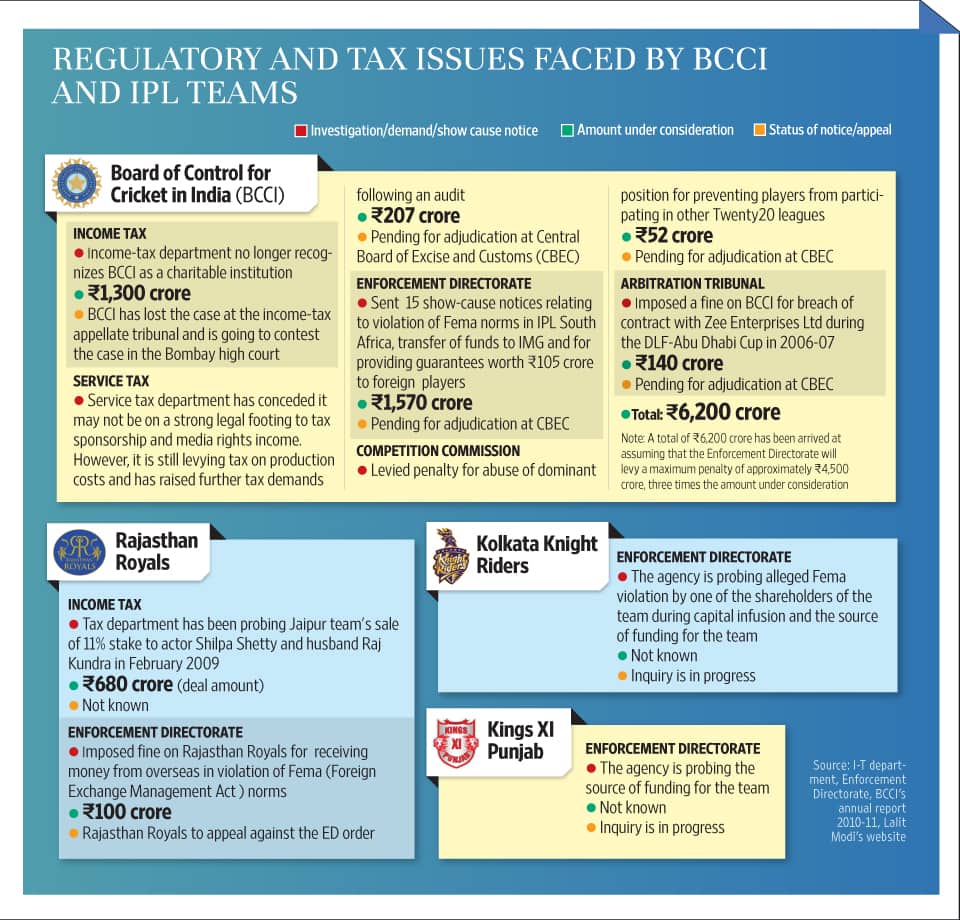 Anuja Chauhan, a former executive creative director at JWT and a writer, said IPL doesn’t have much “gravitas". “It is hyped band, baaja, tamasha (song and dance)," she added.

Colvyn Harris, CEO at JWT, the agency that created a series of IPL commercials, said the tournament’s brand value will remain intact. “It’s not the IPL brand, but the rogue cricketer whose brand value gets tarnished," he said.

“By and large, cricketers play with a lot of integrity," he added.

For now, sponsors are not abandoning the game either. The title sponsor, PepsiCo India Holdings Pvt. Ltd, which has paid ₹ 397 crore for the property, remains committed. “The matter is under investigation and we are confident that BCCI and the IPL governing council will take appropriate action. We believe in the spirit of fair play in sports and remain committed to the property," said aPepsi spokesperson.

The CEO of the league’s official broadcaster remained unfazed, too, although he described the spot-fixing scandal as “shocking".

Saying that BCCI, the Delhi Police and the Rajasthan Royals had acted quickly, Man Jit Singh, CEO of Multi Screen Media Pvt. Ltd (MSM), said: “There has to be a zero-tolerance policy towards these things and that has been demonstrated. So, we are not worried about this controversy having a lasting impact on the game."

And controversies have nothing to do with viewership, he clarified. In 2009, MSM and World Sport Group signed a new deal with BCCI to continue as the official broadcast partners for IPL. The nine-year deal, that runs through till 2017, is worth approximately ₹ 8,200 crore.

From the inaugural season of IPL in 2008, the absolute audience watching the tournament has grown by 68%—from 100 million in season 1 to 168 million last year. Even the online viewership of the game has jumped, according to data available from YouTube and Times Internet Ltd.

In the first 38 matches this year—roughly half the tournament—the combined IPL viewership of Boxtv.com and YouTube.com/Indiatimes recorded 52% growth over 2012 (75.2 million vs 49.3 million last year).

And why should viewership decline, asked Kiran Khalap, co-founder of Chlorophyll Brand and Communications Consultancy Pvt. Ltd. “Lives are not at stake; just a dose of forgetting the boredom of our daily lives, a picnic inside the living room! So credibility is a non-issue," he said.

In some ways, IPL has been controversial from the beginning.

One team, Chennai Super Kings, is owned by BCCI president Srinivasan’s India Cements, in what would clearly be considered a conflict of interest. Another, the Delhi Daredevils, is owned by an infrastructure company, GMR Group, whose dealings with the government have attracted the ire of the government’s auditor and which is also highly leveraged. A third, Pune Warriors India, is owned by a group—Sahara—that has been pulled up by both the stock market regulator and the country’s top court for making an unauthorized public issue. A fourth, Royal Challengers Bangalore, is owned by the UB Group, whose chairman continues to live the high life despite his companies owing several banks, many of them state-owned, huge sums of money. The list goes on.

The league’s founder Lalit Modiis in self-imposed exile in London, even as India’s Enforcement Directorate investigates charges against him, including one related to a “facilitation" fee paid out regarding broadcast rights. One of his last tasks as commissioner of the league was to oversee the induction of two new teams, a process that turned controversial over the ownership of one of the teams, where then minister of state for external affairsShashi Tharoor’s then-girlfriend and now wife had a substantial stake. She eventually gave up that stake, but after one season, the team was booted out of the league.

And apart from these and other major infractions, several IPL players have been accused of other misdemeanours as well. Australian player Luke Pommersbach was accused by a non-resident Indian of trying to force himself on her in a hotel room after an IPL after-party. And Pune Warriors players Chris Parnell and Rahul Sharma were picked up by the police for allegedly participating in a drug-fuelled rave.

Thursday’s revelations by the Delhi Police also reiterate the prevalence of betting related to cricket in India. According to a report in the Mail Todaynewspaper, schoolchildren are increasingly getting involved in betting through bookies. The newspaper said seven children were withdrawn from their institutes for betting. Schoolchildren use a new mobile phone application called Bet-Droid Viewer on theirAndroid phones to access betting rates across teams.

Still, for everyone who said “I told you so" in response to the findings, there are others who believe the rot runs deeper.

IPL is “corrupt from top to bottom and side to side", said sociologist and cricket writer Guha.

The Delhi Police investigation found only three instances of spot-fixing and only three players to be involved, they add, and there should definitely be more.

Ed Hawkins, author of Bookie Gambler Fixer Spy, maintains that while the market for betting on IPL is huge and difficult to estimate, it would run into “100s of millions, at the least", adding that while authorities such as the International Cricket Council work hard, they have manpower issues and lack expertise in betting.

“This needs to change," said Hawkins. Will the scandal affect IPL? “Will it stop the tournament? No, never... At the end of the day, people will still watch IPL. It’s a soap opera and people love it."

Liz Mathew in New Delhi contributed to this story.

Also See:Slideshow | The many faces of S. Sreesanth