New Delhi: With ₹ 36.52 crore, director Shashanka Ghosh’s female buddy film Veere Di Wedding has notched up the fifth highest opening weekend for a Hindi film so far this year—a surprise hit for a film that is being described as “feminist" in Bollywood’s male-dominated scenario. 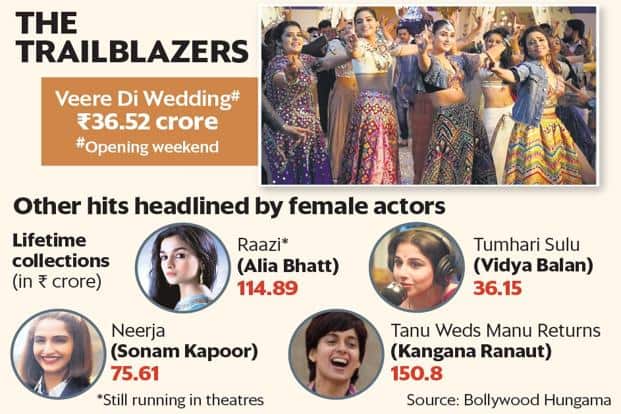 “The Indian box office is male dominated but if you have a female-headlined cast with a strong message that is a reflection of current times, there is a good chance the film will work well," said Atul Mohan, editor of trade magazine Complete Cinema, adding that the first week is likely to close at between ₹ 50-55 crore for the film that released at 2,177 cinemas across India.

Mohan said Indian viewers are now more than happy to see women do things done traditionally by men—Veere’s profane humour and unconventional views on marriage, relationships and sex have had no effect on its success. There is a clear trend. Be it Veere, with its colourful clothes, exotic locations and feel-good vibe, or Raazi, with its patriotic, suspense-laden feel, or women-centric hits like Tanu Weds Manu Returns, they are all well-packaged commercial ventures for which there clearly is an audience in India.

Unlike male-starrers, say industry experts, a female-centric film needs not only big stars but also the right quotient of fun and novelty. There has hardly ever been a Hindi film like Veere—about women bonding in a scandalous, entertaining way.

While the film has sparked a debate on what constitutes feminism in contemporary India, film critic Bharathi Pradhan said the movie was definitely Bollywood’s way of pitching in on the ongoing debate around feminism and women’s issues in the country.

“It’s not like the situations in the film are very different or unfamiliar but the packaging is such that it doesn’t feel judgemental (towards women)," she said. “I would give Ekta Kapoor (co-producer) a lot of credit for this. Being progressive doesn’t mean you have to use explicit language or talk about sex all the time, it just means it’s okay if you do choose to do it," adds Pradhan.

“A lot of people are making a hue and cry about not wanting to take their grandmother to the film. If you do know what the film is about, just don’t take your grandmother," said Pradhan.