New Delhi: Makers of consumer durables, from television sets and digital cameras to microwave ovens and refrigerators, are waiting for the start of the festive season to boost sales and cheer up a sector struggling with rising input costs and pressure on margins.

Appliance makers hope to persuade consumers to open up their wallets with new product launches, discounts and gift offers during the period that begins next month with Onam, the harvest festival celebrated by Keralites, followed by Dussehra, Diwali and Christmas in the lead-up to New Year.

“The industry is heavily banking on the festive season and is hopeful of doing good business," says Suresh Khanna, secretary general of the Consumer Electronics and Appliances Manufacturers Association, or Ceama. 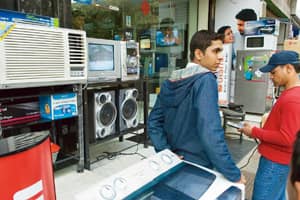 The consumer durables industry has more reason to cheer. The average increase of 21% in the salaries of more than five million Union government employees announced this month may boost consumer spending. The government is also due to pay employees arrears after backdating the salary increase to 1 January 2006.

“Once the government officials get their arrears, it is expected to result in better sales during September-October," Khanna says. Sales of appliances such as refrigerators and air conditioners, which in the north Indian plains account for 40% of sales in the summer, were set back in April-June as inflation and rising credit costs deterred consumers.

The industry expects at least 20-25% growth in sales during the festive season. Godrej Appliances Ltd is targeting a 50% increase in sales, backed by new product launches in categories such as washing machines, microwave ovens and refrigerators. More promotional offers and advertising will reinforce the sales pitch.

“We will launch a gift offer for the festive season which will be announced in September," says Kamal Nandi, vice president of sales and marketing at Godrej Appliances. “The company spends 40% of its advertising and sales promotion budget during the festive season, which is expected to be around Rs45-50 crore this year."

Companies such as Samsung Electronics India Ltd and Whirpool of India Ltd have already announced promotional offers for Onam in Kerala.

Samsung will place traditional “Chakkarakudams", or jaggery pots, on dealer counters from which customers would be asked to pick scratch cards that will reveal the gift they would have won on the purchase of the company’s products. The Korean company will roll out new products in the festive period including flat televisions, digital still cameras, camcorders and home theatres, says Ravinder Zutshi, deputy managing director at Samsung India Electronics.

“The company has decided not to give assured gifts with products this season," LG’s director of marketing V. Ramachandran says. “Our focus will be on enhancing consumer experience by investing in exclusive brand stores which are being upgraded and will be ready before the festive season. We are also investing in after-sales services."

LG expects sales growth to top 30% during the festive season as it prepares to give its entire product line a facelift.

Experts say that Indian consumers are maturing and their focus is shifting from discounts to value for money. “Consumers today are looking for value added products and better features," Ceama’s Khanna says.