Mumbai: Talk to me na, baby," she says leaning in closer. “Not now, Bebo," he replies, eyes glued to the television screen as he wrestles with the game controls. Looking up only when she threatens to pull the plug on his game if he doesn’t do her bidding. This little exchange between Kareena Kapoor and Saif Ali Khan would have set off a media frenzy had it not been orchestrated for a television commercial. Nonetheless, the ad for Hello tunes from Airtel is attracting a fair deal of attention from viewers as well brand managers looking to bet on Bollywood’s hottest A-list couple. 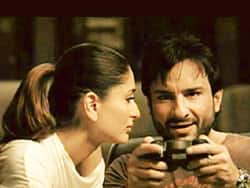 Real-life branding: Saif Ali Khan and Kareena Kapoor in a television commercial. Every scrap of information about them has made headlines.

“With so many pages and hours to fill, it’s no surprise that we’re constantly reading about Saif and Kareena… They’re gorgeous looking, young, hip and surefire saleable," says Anupama Chopra, consulting film editor for news broadcaster NDTV 24x7, who maintains that both stars continue to attract attention because they have critically acclaimed work as well as box office success to their credit.

The couple has already featured in ads for Procter and Gamble Co.’s (P&G) shampoo brand Head & Shoulders and Bharti Airtel Ltd’s digital TV and mobile service businesses. Over the next few months, they will be seen in a new ad for Airtel’s DTH service, may be used by PepsiCo India on joint promotions on their snack brands Lays and Kurkure and are likely to support to a charity.

Fuelling this cultish obsession with Bollywood celebrities is the fact that their courtship period has been generously peppered with what Vivek Kamath of Matrix India Entertainment Consultants Pvt. Ltd calls, “Hey!" moments. The firm manages Kapoor’s endorsements.

Kamath explains that every celebrity couple lives from one “Hey!" moment to another. So, each time the couple work together, he gets her name tattooed on his arm, they attend an event or go on holiday, readers, viewers or the media… go: “Hey! They are a couple!"

One English news channel even played out footage of the couple arriving at the airport from their holiday. The flashing news ticker read “Saifeena: back from holiday." Inspired, perhaps, by “Brangelina" the term coined for Hollywood’s most talked about duo, Brad Pitt and Angelina Jolie.

Individually too, the actors have widened their appeal by constantly reinventing themselves. While Kapoor, who was always seen as a more “mass" actor, has projected herself as very urban, chic and sophisticated over the last few years, Khan was the epitome of “urban cool" with movies such as Dil Chahata Hai. However, his character as Langda Tyagi in 2006’s Omkara changed that, thus widening their appeal across demographics in the age group of 16-45, experts say. Beyond work, even their personal choices have managed to create quite a furore.

Kapoor’s dramatic weight loss sparked a national discussions on eating disorders. One newspaper interviewed Khan, asking him if he was not concerned about his girlfriend’s contraction to a size zero. Now, Kapoor is planning to launch her own fashion portal in the second quarter of this year.

This constant interest and attention has also made them popular picks for brands looking to boost flagging sales. In the last year alone, Kapoor added brands such as Head & Shoulders, Gitanjali jewellery, Kurkure and Airtel to her endorsement portfolio, which also includes brands such as Anne French and Vivel Di Wills, raking in at least Rs5 crore in endorsements alone.

According to industry estimates, Kapoor charges approximately Rs7 crore per movie, Rs2.5 crore per endorsement, Rs40-50 lakh for appearances and Rs1 crore for live shows. The Bollywood blue blood doesn’t dance at weddings, but her manager says she may “make an exception for something like the Mittal wedding".

Khan managed to grab Airtel, Head & Shoulders, and Ponds in 2008 charging an estimated Rs3.5 crore per endorsement annually, for six days of work for the brand. Adding to his portfolio of endorsements that include Asian Paints, General Motors (GM), Seagram, Frito Lays, Provogue, Lenovo and Colgate. Augmenting this is the income from movies, performances at live events, for which Khan charges Rs1 crore as well, and approximately Rs40-50 lakh for appearances.

The couple has also made joint appearances at events such as the Airtel Delhi half marathon, as well as the Filmfare Awards in 2008 where Khan was hosting the show, while Kapoor was performing. The organizers asked Khan to present an award to his lady love; the shots of the couple exchanging a long hug went on air as a hook before the commercial break, to ensure viewers stayed tuned.

Interestingly, there are no discounts for signing the pair—like most young celebrity couples in Bollywood, the contracts are always drawn separately and individual rates apply. So signing “Saifeena" could set a brand back by Rs6 crore while John Abraham and Bipasha Basu, together, would come at half that price.

Costs notwithstanding, experts say, advertising that can capture real-life relationships in a realistic way minus cheesy ad-libbing can go a long way in grabbing consumer attention. “Everyone wants an insight into the personal and private lives of these stars. It’s almost a voyeuristic kind of advertising which people can believe is real," says K.V. Sridhar, national creative director, Leo Burnett India.

Chandrasekar Radhakrishnan, vice-president (marketing), Bharti Airtel Ltd, maintains that celebrities are signed only if they fit the script, and not the other way around. “However, if there is a real life story in there, it makes the communication that much more believable, more engaging and makes that emotional connect… In the people’s mind, they are believable as a couple. It’s just one more story for them to consume," he adds.

What makes them different from other filmi sweethearts such as Ajay and Kajol Devgan, John Abraham and Bipasha Basu, and Ranbir Kapoor and Deepika Padukone, is the fact that both Kapoor and Khan are Bollywood royalty. She is from the first family of the industry, his father is the Nawab of Pataudi. “They would be the Indian equivalent of what would be if a Kennedy married someone from the British royal family," says Anirban Das Blah, chief executive officer for Globosport India Pvt. Ltd, which manages Khan’s endorsements.

Also, they’re Bollywood’s newest big couple in love. For Kapoor and Khan, the offers are still coming in. “For every 10 offers that come for Kareena, three are for them as a couple," says Kamath. Clearly, the sound of two hearts beating as one sounds more like that of a cash register.

Some of the other big categories that could look to sign on the couple are white goods, colas, skincare, mobile handsets and online gaming. The couple are also likely to lend their joint support to a social cause, says a person familiar with the development.

Brands that have signed one half of the couple may look to sign the other, if the need arises in that space. For example, in 2008 P&G signed on Khan for their shampoo brand Head & Shoulders, a few months after they had signed on Kapoor making them the first company to leverage the romance. The ad had images of fast cars, music and Kapoor popping up as thought bubbles on Khan’s mind in the television commercial.

“When you’re looking at brand endorsements, who you pick will be determined by the brand strategy. So, from our perspective, if the brand strategy required the use of a celebrity couple…well, Kareena and Saif are hot and happening right now so (we would) certainly evaluate it. But for now, there are no such plans. We’re just going to go with Saif," says Ankush Arora, senior vice-president, sales, marketing & service for General Motors India Pvt. Ltd, which dropped actor Rani Mukerji as their ambassador in January 2008.

FritoLay, which has Khan as their ambassador for Lays potato chips, recently signed Kapoor to endorse a variant of another group brand Kurkure and may consider using the couple together in the future.

“Stars like Saif, Juhi (Chawala), (Mahendra Singh) Dhoni have been associated with us over years, and traditionally we have leveraged their personalities for different brands in our portfolio... As of now, there are no plans to feature Saif and Kareena together as a couple in any of our forthcoming communication. However, in the future, there could be a possibility of using the combined strength of our brand ambassadors," said Deepika Warrier, director (marketing), PepsiCo India Holdings (FritoLay division).

Some experts maintain that advertisers will continue to proceed with caution. “With couples these days, brands are always scared that if the they break up, it could impact the very thought process and imagery they were signed on to create," says Vinita Bangard, chief operating officer, Percept Talent Management, an arm of Percept Holdings Pvt. Ltd.

However, fashion designer Manish Malhotra, who is also a friend of the couple, is keeping his fingers crossed. “They look very happy together. This is for keeps."