NBC Universal will own, market and syndicate Ten Sports’ digital content for India and West Asia, including a cricket tournament to be played by New Zealand, India and Sri Lanka in the island nation in September, said the executive who didn’t want to be named. 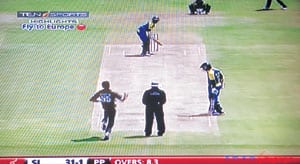 Towards a deal: A TV grab of a match on Ten Sports. The channel’s content for India and West Asia may be owned by NBC Universal.

“We are in discussions with NBC Universal but the agreement is not yet finalized and it’s too early for us to comment," said Peter Hutton, chief operating officer of Taj Television Ltd.

Mint emailed queries to NBC Universal spokesperson Liz Fischer on Wednesday evening, India time, but there was no response by the time this edition went to the press.

Some of the digital content is also expected to find its way to NDTV.com, since NBC Universal holds a 26% stake in NDTV Networks Plc., the UK unit of New Delhi Television Ltd. NDTV Networks manages NDTV’s entertainment and lifestyle channels, and its digital media and other interests.

Microsoft Corp.’s MSN and Bennett Coleman and Co. Ltd (BCCL) which publishes The Times of India and Economic Times, are some of the companies that are interested in streaming live matches that would be broadcast on Ten Sports on their respective websites, the executive said. BCCL competes with HT Media Ltd, publisher of Hindustan Times and Mint.

Krishna Prasad, Microsoft executive producer, India, while not commenting directly on the deal, said: “We are always in talks with original content producers for live streaming. It’s an ongoing process. The trouble is that we don’t find too many media channels that also have broadcast rights to cricket and other tournaments."

Rahul Kansal, chief marketing officer of BCCL, did not comment when he was contacted on phone. There was no response from Bhaskar Das, executive president of BCCL, to queries emailed to him on Wednesday evening.

Atul Hegde, chief executive of Mumbai-based digital agency Ignitee India Pvt. Ltd, said live online streams of video content has not been monetized in a big way by any of the major sports channels.

“It’s difficult to do (it) because unless the content gets traction from viewers, advertisers will not come on board. The IPL 20:20 website offered live streaming of matches for other markets, and to my mind, it may have got eyeballs but still not enough advertisers," Hegde said.

L.S. Krishnan, president of media specialist Radar of the Mudra group, said the Sri Lanka series ought to fetch Ten Sports good ad revenue and ratings because the series will be played between 2.30pm and 10pm and not late in the nights. However, given the low Internet penetration in India, he was doubtful whether digital content will attract sufficient ad revenue.