In 1983, at the Dorothy Chandler Pavilion in Los Angeles, as she cradled her golden statuette and walked to the dais to make an acceptance speech, 57-year-old Bhanu Rajopadhye Athaiya became the first Indian to receive an Academy Award of Merit. From the rows of gowns and tuxedos below, an ecstatic Lord Richard Attenborough blew her kisses. This was one of the eight Oscars his epic film, Gandhi, won.

And now these histories are part of a new coffee-table book, The Art of Costume Design, published by Collins. Athaiya founded fashion landmarks. Considering how deeply cinema shapes Indian popular culture, her silver-screen creations seeped from their film avatars to the high street.

It was Athaiya who stitched the sari and made it into an outfit that could be slipped on, allowing heroines to run around trees with abandon. In the Technicolor era, when directors wanted their lead women to portray a certain degree of Western sophistication, it was Athaiya who eschewed the baggy salwar for the form-fitting churidar, working in conical brassieres and tight kurtas into their wardrobes as well.

Click hereto see a slideshow of fashion in films

An artist by training, Athaiya was part of the Bombay Progressive Artists’ Group and before her entry into films, she had exhibited in group shows with her contemporaries F.N. Souza and M.F. Husain. The detailed fashion sketches included in the book bear witness to her days as a fashion illustrator with Eve’s Weekly, a stint that introduced her to the world of fashion.

Reacting to praise for the immaculately produced photo treatise that captures her vision as a designer, Athaiya calls herself a “visualizer". “Being a costume designer doesn’t mean holding a needle and thread. I’m an artist and I know human proportions—that’s what one needs to design wardrobes." 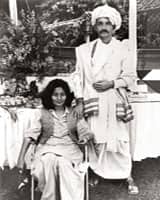 Oscar winner: Athaiya with Ben Kingsley on the sets of Gandhi, Delhi, circa 1980.

There are semiotic undertones to her choice of colour and cut. In Henna (1991), Zeba Bakhtiar, who is otherwise dressed in bright colours through the film, is wearing black when she receives bad news about her lover.

Athaiya won her first National Award for Lekin and another one for Lagaan in 2002. She was also conferred with Filmfare’s Lifetime Achievement Award in 2009.