A Boston Consulting Group study says that by 2020, about 315 million Indians living in rural areas will be connected to the Internet, compared to 120 million at present

New Delhi: Bharat is getting online faster than India. By 2020, about 315 million Indians living in rural areas will be connected to the Internet, compared to around 120 million at present. That’s about 36% of the country’s total online population.

By 2020, this share of rural India will jump to 48%, creating a huge opportunity for brands and marketers in places where establishing a physical presence is still a challenge, according to a study by the Boston Consulting Group (BCG) titled ‘The Rising Connected Consumer in Rural India’.

At present, the study noted, rural Indians use the Internet mainly for social network websites (around 70% of the Internet users living in rural areas) such as Facebook, and for emailing.

About 15% of rural consumers use the Internet to research products, purchase a product, or register satisfaction or dissatisfaction with a product after the purchase is made, compared with 30% of urban consumers. “The amount of actual online commerce in rural India is still small, but it is picking up. From 2015 to 2016, the penetration of online purchasing in these areas doubled from 4% to 8%," noted the study. The key reasons are “convenience and discounts," it added.

Rural consumers hesitate to buy online because of delivery and returns issues, and a widespread perception that e-commerce is neither safe nor reliable, the BCG study said. 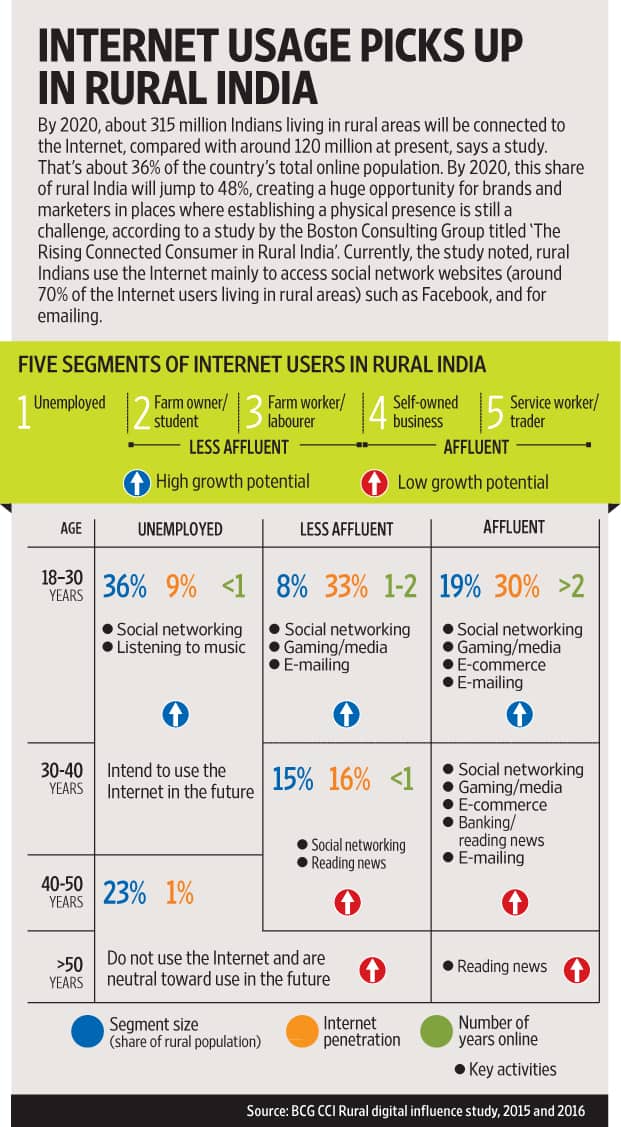 “Almost 40% of rural consumers feel that their personal information is at risk, while 30% believe that products sold online are of poor quality and 25% find e-commerce sites and apps hard to use," it added.

Marketers, BCG suggested, should have a different digital strategy for rural markets. These include: a simpler or a different app designed for smaller screens and low bandwidth telecom networks; and availability in local languages. Besides, marketers should make advertisements more relevant to this new set of target customers.

“Companies looking to tap the rural market should first evaluate which touch points in their targeted customers’ purchase journeys are most affected by digital and to what extent… The economics of the Internet give marketers an opportunity to re-evaluate the business case for reaching rural markets," added the BCG study.

“The benefit of the Internet is that people are more aware of what is happening in the world. With the digital revolution taking place in the country, it becomes easier for brands to reach consumers. We are hopeful that with rural penetration of the Internet, people will be more aware about brands, products and it is going to help the retailers a lot," said Sandeep Jain, executive director of Monte Carlo Fashions Ltd.

According to Kumar Rajagopalan, chief executive of The Retailers Association of India (RAI), bandwidth is the biggest challenge. “I don’t think until we get the bandwidth sorted, true inclusive growth can happen," he said.

Vivek Gaur, CEO of online seller Yepme.com agreed. “The infrastructure needs to come up as quickly as Internet penetration is coming up. For a brand like ours which is a mass casual wear brand, it makes a lot of sense to have something which is driving traffic from the bottom of the pyramid. I think the government is investing a lot and my sense is that India will be more like China than the US in a couple of years where people have much more access to the Internet," he added.

In its study, BCG gave the example of China’s largest online seller Alibaba’s model, tailored for rural areas in China. “In October 2014, Alibaba announced it was investing $1.6 billion to set up 100,000 rural service centers all over China’s countryside. It has a presence in almost 16,000 villages so far. These e-commerce outposts are equipped with computers and free Internet service," noted the study.

Alibaba-backed Paytm, Indian online payment service provider and online marketplace, declined comment on how the company is looking at expanding its reach in the rural markets.

The study offers insights on the user-base that is expected to drive the next wave of Internet consumption in India. That is perhaps why search engine Google and popular social networking site Facebook are investing top dollars in local content in India. At present, Google is working with the government to roll out its ambitious Internet balloon programme, called Project Loon, which forms a large communication network using balloons in the earth’s stratosphere. This is specifically aimed at providing connectivity in rural areas.

The report is based on surveys conducted by BCG’s Center for Customer Insight (CCI) of approximately 4,000 rural consumers in 27 villages in 14 states in 2015 and 2016. It profiles five different segments of Internet users in rural India – mature, ambitious, late adopters, next wave users and ‘dark on the Internet’. More than 60% of rural users have been online for less than two years, which means most rural users are still relatively immature digitally, and their usage patterns can be expected to evolve as they gain experience. It is a mistake to regard rural users as a single set.

It is therefore important for marketers to understand the differences between rural and urban consumers. Two-thirds of rural users go online using feature phones and only a quarter have smartphones. As against this, almost two-thirds of urban users own smartphones. Because of differences in devices, network capabilities and underlying consumer behaviour, rural and urban internet users choose different apps, and do different activities online.

For example, rural users are more likely to use the UC Web browser (which is popular in other emerging markets as well) because it employs technologies such as data compression, which helps load web content faster and reduce data consumption during browsing. They tend to use apps such as SongsPK, which downloads songs for free, because streaming does not work well on 2G connections. For messaging, many rural residents use Whatsapp, which would probably be of the first apps they tried. Alternatives such as Hi and Line are perceived to be heavy data consumption apps; they are used more for video calls and exchanging files. Vernacular media consumption apps such as Dailyhunt (formerly NewsHunt) and Dainik Jagran are more popular than English-language media apps.