Small Matters | Nuts and bolts that keep the Games ticking

Small Matters | Nuts and bolts that keep the Games ticking

London: If the physical exertions of the Olympic athletes seem formidable, spare a thought for the logistical challenges. Just conducting an Olympics is a fiendishly complicated task. Even the most ill-informed sports fan will admit that assembling over 10,000 athletes in one place, feeding them, keeping track of them, and then arranging for them to participate in a plethora of often obscure disciplines can be somewhat demanding.

Throw in some cantankerous media, intense rivalries and a dollop or two of subjective judging and you know exactly why many parts of the world grind to a halt during this quadrennial festival of agony and ecstasy.

In the glaring lights of the big show, it can be easy to miss some of the lesser known, often tiny, things that are needed to get the show going. Athletes and organizers use a bewildering array of small tools and machines during the course of the Games. Many of them are seldom seen, leave alone used, outside particular arenas or events.

These are just a few of those things: 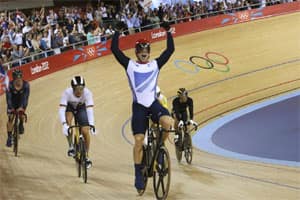 The second gun: Much has been written about the high-tech starting systems being used for the races in London. At the Olympic Stadium, the starter pistol is an electronic device hooked up to the central timing system and the starting blocks. But often there is another member of the crew present armed with a regular starter gun that fires blanks. Why? His job is to fire in case there is a false start that is not automatically indicated by the computers.

Handball resin: Look closely at the feet of handball players and you might notice a toffee-coloured smear on the side of their shoes. This is a reserve supply of handball resin. Players use this resin on their hands and ball for better grip (this is legal). This is why the balls often get dirty and black over the course of a game—that is all the dirt from the court sticking to it.

Inglefield clips: One of the key moments of the opening ceremony is the hoisting of the Olympic flag. But how do those smart soldiers attach flags so quickly to the “halyard" or hoisting rope? They use Inglefield clips: invented in the 1890s and a fixture in the Royal Navy ever since. The clips look like interlocking links in a chain. There is a fine notch where the links come apart or together, which must be finely aligned by hand.

The black card: Who would have thought that of all the disciplines at the Olympics, badminton would create so much controversy? It is now common knowledge that four women’s doubles teams were disqualified for, essentially, playing to lose their matches. It was also during this fracas than many fans first spotted the dreaded “black card". In badminton, a black card is handed out to indicate disqualification. A much more impactful choice of colour, no doubt, than football’s cheerful yellow or hockey’s vibrant green.