Chennai Super Kings and Mumbai Indians were the most valuable brands among IPL teams, according to a study

Bangalore/Mumbai: The scandal ridden Twenty20 cricket tournament, the Indian Premier League (IPL) still remains an attractive event for advertisers and sponsors owing to its popularity with viewers, and its franchise brands are together worth over $400 million, according to a study by a Mumbai based brand valuation company.

American Appraisal India Pvt. Ltd, a brand valuation and a tax and finance advisory services company, valued the IPL format at as much as $3.2 billion, ahead of its seventh edition scheduled for April this year. American Appraisal, which is part of the US-headquartered valuation consultancy with offices in 40 countries, reached out to over 300 companies and advertising agencies that are involved or affiliated with the IPL as sponsors, advertisers or consultants, as well as three IPL teams.

Chennai Super Kings, the most successful IPL team, and Mumbai Indians were found to be the most valuable brands among the IPL franchises with an estimated value of $72 million each, according to the study.

Kolkata Knight Riders and Royal Challengers Bangalore were third and fourth, respectively, while Sunrisers Hyderabad was in the last position with a brand value of $25 million.

The study used the “Relief from Royalty" brand valuation method. This method is based on the estimated royalty that a company would have to pay for the use of the brand if it had to licence it. The method takes into account the revenue generating ability of the brand.

“We were expecting some negative reaction toward the IPL considering the controversies…but we were surprised to see the response. Most stakeholders we spoke to in this survey are overwhelmingly still positive about the IPL," Varun Gupta, managing director at American Appraisal India, said in an interview over the phone. “While the TRP’s may have fallen the viewership has gone up significantly. Apart from the IPL, there is no other platform of reaching out to so many people." 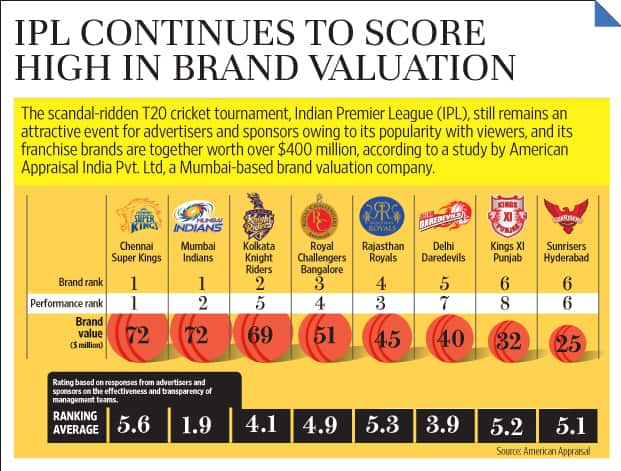 To begin with, both teams have popular players such as M.S. Dhoni and Sachin Tendulkar respectively with consistent performances in each season of the Indian Premier League. The two franchises have not only managed to keep the core teams, they are based out of large cities and have a much larger fan base than other franchises, explained Hiren Pandit, chief operating officer (COO), SE Transstadia, a sports infrastructure and IP company. “The fan base is crucial in pulling in the sponsors and has a direct impact on revenue streams such as merchandise," said Pandit.

On Monday, a Supreme Court-appointed committee headed by Mukul Mudgal, a former judge, alleged that a relative of N. Srinivasan, president of the Board of Control for Cricket in India (BCCI), was engaged in betting and match fixing and criticized cosy relationships between team owners and their players.

Chennai Super Kings is owned by India Cements Ltd, a company controlled by Srinivasan. The report by the Mudgal committee also said allegations that the owners of the Rajasthan Royals team were involved in betting and fixing need “thorough investigation".

American Appraisal’s Gupta expects the Mudgal report to hurt the image and valuation of some IPL teams. “I think it will definitely have some impact on the brand valuation. It’s difficult to say how much as of now but we will be reaching out to some of the correspondents in the survey and asking them whether they have changed their opinion or attitude toward any team after the report. We are likely to have updated numbers in the next few weeks," Gupta said.

However, Pandit of Transstadia does not foresee any effect of the indictment of the report on the brand unless some serious legal action is taken and the teams are terminated. “The Indian Premier League is too big now for the business to get impacted substantially. As a country, we forgive and forget very quickly," he added.

Little surprise then, Gupta expects the IPL valuations to rise significantly over the next few years as advertisers and sponsors remain keen to use the platform.

More than 52% of the survey’s respondents were cited as saying that franchise lead sponsorships could be between ₹ 15- ₹ 75 crore per season.

Gupta also expects IPL merchandising to significantly pick up over the next few years.

“The IPL merchandise market represents significant untapped potential for IPL franchises. Based on our analysis, we estimate that current market for IPL branded merchandise is $40 million and it will increase to $411 million by 2020," he said.

According to Vinit Karnik, national director, sports and live events, GroupM ESP, the merchandise business is big in developed markets. However, in India it is still very small. One of the key reasons for this is piracy and the availability of counterfeit products.

Besides, even the prices of original IPL team merchandise are quite high from an Indian market point of view. “So it will be a while before that actually starts adding real value in terms of revenue for IPL teams. However, it is the biggest draw for fan-engagement," Karnik said.