New Delhi: As Star India Pvt. Ltd draws the curtains on its eight-year-old Hindi channel Star One, Rupert Murdoch’s entertainment company is launching Life OK, a brand new channel aimed at the 150 million television viewers in the Hindi-speaking market. Planned to go on air on 18 December, Life OK will be Star India’s first major launch under Uday Shankar who was appointed CEO in October 2007, and expects to reach 30 million viewers on day one. 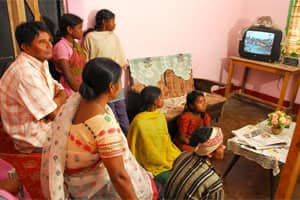 Having secured Star Plus’ position as the market leader (with weekly gross rating points close to 350), Star India is looking to consolidate. “Viewers were forced to go to other channels because we weren’t providing enough sampling opportunities," Shankar said.

Life OK will address a certain mindset and not the age group, according to Ajit Thakur, general manager, Life OK. The channel will serve in the age group of 15 plus and offer mixed programmes, including comedies, thrillers and mythologicals. “However, every story will have an underlying value."

The name Life OK reflects the philosophy of the new brand. “Through our stories we wish to tell people that you are free to seek what you want but in your search for more you must not forget what you already have," Thakur said. The “values" concept will be reinforced by Madhuri Dixit, who will play the sutradhar (storyteller) and interpret the values in the stories for the audience. “She is more like the brand philosopher and not the brand ambassador," Thakur said.

The new channel will be fiction-led as Shankar believes in habit-forming content. “I am not a great believer in reality shows."

Manoj Malkani, vice-president at Zenith Optimedia Pvt. Ltd, however, senses a dissonance in the programming line-up: “If the channel is trying to reach out to a different audience than Star Plus, then putting out shows like Devon Ka Dev Mahadev (mythology) may not cut much ice."

He said the shows lined up on Life OK did not seem radically different from what is playing on existing entertainment channels.

The channel will differ from others in some ways. It will telecast serials on all days of the week instead of the five-day calendar followed by others. The decision is based on complaints from consumers who found weekend TV boring.

Armed with a launch budget of more than ₹ 700 crore, the channel is expected to spend ₹ 120 crore in marketing the brand via digital media, roadblocks on television, print and outdoor campaigns. The rest is being invested in programming and distribution.

Shankar dismisses concerns about launching a new brand in an overcrowded market. On any given day, eight Hindi channels broadcast about 58-60 shows during the three and a half hour prime time band on weekdays. “We are adding another six-seven programmes, so actually it’s not much difference from the consumer point of view."

Shripad Kulkarni, chief executive officer of Allied Media, part of Percept Ltd, agreed, citing the example of Colors, which also entered a crowded market and made a mark.

Life OK also plans to manage advertising inventory differently. It will have three shows an hour unlike the standard two on other channels and advertising breaks won’t exceed two minutes.

“That’s nothing new," said Shankar. “We have been cutting down on our inventories across channels. Channel V inventory has been halved for better consumer experience. This has helped us. Viewers have rewarded us with better ratings. People watch you for the content eventually."

Sejal Shah, vice-president, India Media Exchange (IMX), Publicis Groupe’s media buying unit, said that launching amid an economic slowdown could have a negative impact on revenue. “But it has made it very clear that it intends to go slow in terms of advertising. It may not be a big concern since the Star network is doing well."

Amit Ray, president and COO at Lintas Media Group (LMG), views the limited ad break strategy as a wise one. “A lot of the people who have moved out or are moving out of Hindi general entertainment are young people and they don’t tolerate much advertising."

Shankar said Star One failed because it wasn’t allowed to compete with Star Plus. Life OK is “a risk, huge risk, with all the investments and time and effort gone into it".

Abhilasha Ojha and Anushree Chandran contributed to this story.