ICC chief executive Lorgat to step down in June 2012

ICC chief executive Lorgat to step down in June 2012

International Cricket Council (ICC) chief executive Haroon Lorgat will step down after a four-year tenure in June 2012, the governing body said on Tuesday. 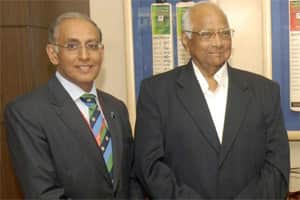 Lorgat’s eventful tenure included ICC relocating its headquarters to Dubai and dealing with issues such as the 2009 attack on visiting Sri Lankan cricketers in Lahore, hosting of this year’s 50-over World Cup in the Indian sub-continent and the recent spot-fixing scandal that led to three Pakistani cricketers to be jailed.

“I am satisfied that his contribution to the ICC and to cricket leaves us in a solid position," Pawar said.

“The game owes Mr Lorgat a debt of gratitude for his good leadership and while we are sad at his departure we understand fully the reasons and wish him well in the future."

ICC vice-president Alan Isaac will oversee the recruitment of the next chief executive.