Written on the body, a box office test

Written on the body, a box office test

Mumbai: How do you solve a problem like Sunny Leone? 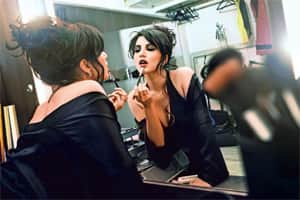 Bollywood twist: Sunny Leone will gauge for herself the local media’s response to her latest career move when she undertakes a tour of Indian cities from 28 July

The promotions dwell on the carefully lit, well-toned and semi-clad bodies of both actors in various lovemaking positions. The effort has been to balance the fervour that follows the very mention of Leone’s name with reminding audiences of the movie’s overall theme. A widely circulated poster in January showed not Leone’s face, but the body of an unidentified naked woman covered with a diaphanous garment. “The poster doesn’t depend on the person, but the physical form," Bhatt said. “I was told that you can’t have a hoarding where you don’t show the person’s face. But we often underestimate people. When you hold your cards back, that’s where the excitement begins." Another poster shows a bare-backed woman stepping into a waterfall.

Audiences seem to be more tolerant of bare backs and lip-to-lip contact than before, but that doesn’t mean that the box office has been fully tamed, cautions Prabhat Choudhary, a publicist with communications agency Spice. “We are more accepting now and we are less scandalized," said Choudhary, whose company helped with marketing The Dirty Picture last year. “I have seen grandmothers watch Murder with their granddaughters. If there is a challenge, though, it is that we are getting immune. Just because a film has nudity, it won’t be exciting enough."

“Without taking things for granted, we’re expecting a very good initial," he added.