Everyone wants to be connected in this digital world. Be it at their homes, in offices, in colleges, at railway stations, bus stops, cafes or airports, millions worldwide latch on daily to paid and free Wi-Fi hotspots to surf the Net on their mobile devices.

Wi-Fi networks use radio waves—typically deployed within unlicensed spectrum over the 2.4 gigahertz (GHz) and 5GHz frequency bands—similar to cellphones and televisions, to connect to a wireless access point called a “router", which directly connects to the Internet.

Users connecting to Wi-Fi at an airport, coffee shop, library or a hotel—have all used an open Wi-Fi network. Locations with open and public wireless access are called wireless or public Wi-Fi hotspots.

Globally, the Wi-Fi hotspot market size was estimated to be over $1.5 billion in 2015, with over 47 million public hotspots deployed. France, the US and the UK led the deployment of public Wi-Fi hotspots with 13 million, 9.8 million and 5.6 million installed hotspots, respectively.

Revenue models such as a Wi-Fi provider striking revenue-share agreements with venue owners is a popular and proven business model. Comparatively, the adoption of Wi-Fi for mobile data offloading by telecom firms is slow due to the conservative nature of the telcos and their apprehension regarding signal interference issues and unproven business models.

Most of the public Wi-Fi hotspots in the country are venue-based deployments such as at airports and railway stations (0.5%), hotels (41%) and shopping malls, restaurants, coffee shops, and retail outlets (58%).

There are currently over 31,000 public Wi-Fi hotspots installed in India, according to industry estimates, and the number is expected to grow beyond 202,000 by 2018. However, for India to match the current global average of one public Wi-Fi hotspot per 150 people, an additional 800,000 hotspots need to be deployed.

Currently, most of the Indian telcos provide enterprise Wi-Fi solutions through custom deployments in IT and business parks, educational institutes (campus Wi-Fi), hospitals, etc. They have not ventured into community Wi-Fi networks or urban location-aware services.

For instance, there were attempts by India’s leading telcos to pilot a public Wi-Fi hotspots aggregation service and even a home Wi-Fi service, but none could scale it nationally or deploy it commercially.

Telcos in India now view public Wi-Fi as complimentary to their core offerings, and are focusing on deployment of Wi-Fi to offload their cellular data traffic.

Having said that, the higher speed, ease of setting up of Wi-Fi hotspots—along with a rapidly growing smartphone user base and the fact that a significant portion of the population does not have an Internet connection—are key drivers for potential public Wi-Fi hotspots in India.

It is to tap this untouched segment of the population that global Internet tech companies such as Google Inc. and Facebook Inc. opt for Wi-Fi and public hotspots as a preferred route to deploy broadband networks in India. While Google (in partnership with RailTel, as backhaul provider) is aiming to enable 400 railway stations in India with public Wi-Fi hotspots (with 13 already deployed and being used by over two million people daily), Facebook recently announced plans to set up community public Wi-Fi hotspots in rural India, in partnership with Bharat Sanchar Nigam Ltd. The primary objective of both these companies is to attract new Internet users and expose them to the world of possibilities enabled by high-speed connectivity. 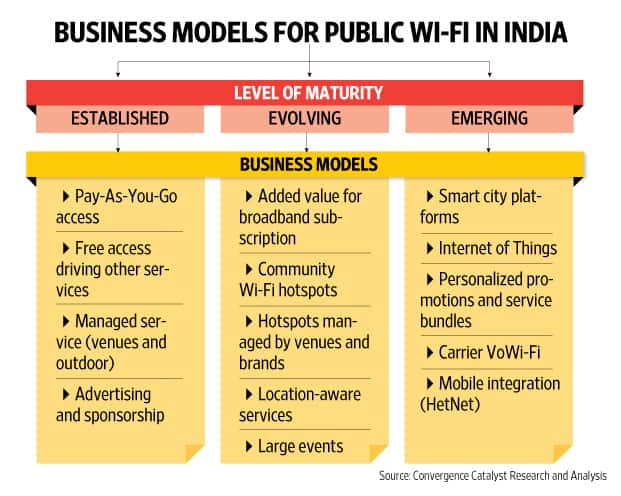 Companies in India lack both, the support of the government to aid public Wi-Fi hotspot roll-out and adequate optic fibre cable networks, which act as dependable backhaul option. Apart from these, there exist other operational issues such as discontinued (non-seamless) and discouraging consumer user experience due to the department of telecommunications’ “Wi-Fi user authentication" regulations, difficulty in managing scale and demand in a public set-up, and seeking public body clearances.

With the demand for wireless connectivity in the healthcare sector on the rise and numerous benefits of wearable devices for patients and clinicians alike, Wi-Fi is well positioned to play a leading role in making the digital health vision a reality.

However, this wireless connectivity can also pose a threat.

A key issue with public Wi-Fi hotspots is that they can be easily hacked. Be it the Evil Twin deployment (fake hotspot set up by the hacker, like in the recent Rio Olympics scenario) or Sniffing on the Wi-Fi network and collating users’ info, or Man-in-the-Middle or Side Jacking, there exist many types of potential hacks on public Wi-Fi hotspots.

Any public Wi-Fi hotspot (including the paid ones at hotels and airports) can be hacked and eavesdropped upon wirelessly. It is recommended for users not to transmit user names, passwords, make payments, or conduct credit card or other financial transactions on public Wi-Fi networks. Currently, using a Virtual Private Network (such as private Wi-Fi) is the only secure way to use public Wi-Fi networks.

Apart from cybersecurity threats and vulnerabilities, there exist potential internal and home security risks of wide-scale public Wi-Fi hotspot networks. In India, a country which is fighting terrorism not just on its borders, but well within its territory, and especially cities, a public Internet connection, which an anti-social element can use and/or hack sporadically without leaving a trace, is a significant risk. We have witnessed terrorist groups communicating with each other, media and the police using Wi-Fi networks during the 2008 New Delhi and Ahmedabad bomb blasts. This is also one of the key reasons for Indian public agencies’ apprehension about giving permission for wide-scale public Wi-Fi hotspot network deployments.

However, in the smart city scenario, traditional Wi-Fi systems are not ideal for outdoor IoT devices as they lack adequate range and are energy demanding. “Wi-Fi HaLow" (802.11ah standard) is a system that has been developed to increase range and allow for low power sensors to transmit small data packages over a low bandwidth link. Also, mobile telcos, especially LTE (long-term evolution, or 4G) services providers will use Wi-Fi for offloading their mobile data traffic and deployment of mobile heterogeneous networks.

The author is partner of research firm Convergence Catalyst.