Three is company too

Three is company too

Pick the odd one out: Shankar-Jaikishan, Kalyanji-Anandji, Laxmikant-Pyarelal, Jatin-Lalit, Vishal-Shekhar and Shankar-Ehsaan-Loy. Obviously, it’s the trio of composers that stands out among the list of Bollywood duos.

Over the years, while duos have had extremely successful careers as music composers, it is rare to come across an enduring relationship between three musicians.

Since they got together in 1997 for the soundtrack of the Hindi movie Dus, there has been no looking back for Shankar Mahadevan, Ehsaan Noorani and Loy Mendonsa. 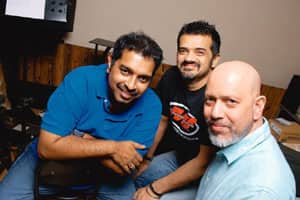 Within 5 minutes it’s evident that you have very different personalities.

Ehsaan: We come from vastly different backgrounds and are into very different kinds of music. I come from a fully rock, guitar background and know a lot about modern music like rock, pop and blues. Shankar’s got a strong Indian background, yet he has an easy grasp of any kind of music. Loy has a lot of colour in his sound. Being a piano player, which is the mother instrument, he can just put his hands on the piano and come up with a melody in no time. All that blends together and you get something which is quite unique and changes with every composition.

Shankar: As people, we have no resemblance to each other! His (Ehsaan’s) tastes in music, food or lifestyle are different from my tastes and environment. That keeps it going—three completely different individuals in one room and each one inquisitive about the other person’s take on a particular thing.

Does having a third vote help?

Ehsaan: Definitely. One of us will always be objective about whether something works or about the aesthetics. Somebody else may bring something new into the composition.

Loy: Sometimes everyone gets too involved in a composition; then one needs to step out and come back in with a completely different perspective.

Shankar: The advantage of being three is that if there is a conflict, the third guy can settle the issue.

Ehsaan: An important factor which, as composers, is unique to A.R. Rahman and us, is that we are musicians ourselves. So we do not take an idea and pass it on to someone to execute for us. All three of us have a strong sense of harmony and theory of music, which means you can take a melody and completely skew it by adding harmony in the background.

What is the process of creation?

Ehsaan: There is really no pattern…

Shankar: There can’t be a pattern.

Loy: Where do you start?

Shankar: In the morning, we get an empty canvas and three of us paint. Nobody knows who is going to start. If one of us puts one colour, will it work? If we erase that colour and start with something else…by the end of the day we are pretty much ready with some song, some piece of music.

Does being commercial for the sake of Bollywood constrain you, creatively?

All: Yes, sometimes it does.

Ehsaan: On the flip side, Dil Chahta Hai was not really commercial; there were no Indian instruments in it. There were good melodies in the soundtrack. Anyone who writes a song—whether it’s Sting, John Mayer or us—will write a good melody. Then it automatically becomes commercial. We will not do My Name is Khan with avant-garde jazz music, which we know only the three of us will listen to.

Shankar: As composers, you are walking on a path where you know your music is a huge medium. Today you are sitting in this 10x10 room and tomorrow you know the whole world is going to hear your songs. But we also have to maintain our own influences and musical quality otherwise we won’t be able to sleep peacefully.

Have you ever reached breaking point?

Loy: Never as a group, but many times on the music we are making.

Shankar: For a song, a million times, for almost every song. There are fights, arguments, walking out of the studio.

Loy: We are well aware that Shankar is a high-profile individual and artist. If one is not aware of such things then that can create problems.

Ehsaan: If we had got success at 25, things would have been different, but not when you are older.

What about personal ambitions?

Shankar: We do many things on our own. Ehsaan plays with a band. I am already doing too many things and I would like to do them properly. Loy has just started learning to play the upright bass.

Loy: It’s a new passion. When I have learnt my bass properly, I want to play bass in a trio.

Ehsaan: I would like to go back to music school for a few months.

Loy: I might go to New Zealand. My brother is there and he said he would find me an instructor to study the bass for a month or so.

Shankar: I don’t want to go to school. I want to get into practising properly. I have never done riyaaz in my life. I say that with my hand over a harmonium—so I cannot lie. I want to do that for 2 hours a day.

What keeps you grounded?

Shankar: That this is not the only thing we enjoy doing. This is just one. A bhajan concert, watching a cookery show or a trip to Goa with my family will excite me equally. Studying guitar or learning a new guitar solo will excite Ehsaan.

Ehsaan: The learning process really keeps you going. You look at things more holistically as opposed to being influenced by just one factor of your life. It has a lot to do with personalities also. You can fly high and behave like…

Ehsaan: But that doesn’t get you anywhere.

What are your best albums?

Loy: Dil Chahta Hai is beautiful and a couple of songs like Maa (Taare Zameen Par) and Kal ho na ho have translated beyond the movie.

Ehsaan: Lakshya is underrated. We have done a lot of good work and also some horrid songs, like one song from Kuch Na Kaho and one from Mission Kashmir.

Shankar: You cannot be partial to a song because it has done well. There are albums that were good that did not do well because the film did not work, like Luck By Chance, Armaan, London Dreams and Kuch Na Kaho.

How come no one ever uses Loy-Shankar-Ehsaan or some other combination?

Shankar: Many people say Shankar-Loy-Ehsaan. If you say Jaikishan-Shankar it sounds like a different person.

Ehsaan: It is programming. It’s funny though, because while people know Shankar they get confused between Loy and me. So when they see either of us they say that’s Ehsaan-Loy, like it’s one person.

Is three company or a crowd?

Loy: I am okay with either. It doesn’t bother me. I never really analyse.