However, Samsung faces a 'real possibility' of losing its position to home-grown brands such as Micromax

New Delhi: Samsung Electronics Co. is still No.1 in India, both in the overall handset market and the rapidly-growing smartphone segment, but faces a “real possibility" of losing its position to home-grown brands such as Micromax, according to a new report released on Monday.

Research firm International Data Corporation (IDC) said in a report that Samsung stood first with 17% market share in the June quarter of 2014 followed by Micromax Informatics Ltd with 14%, and Nokia Oyj with 10%.

“While Samsung has held on to its leadership position in the market, it is noteworthy that Micromax is growing faster. Samsung needs to continue to address the low-end of the market aggressively, and also needs a blockbuster product at the high-end to regain momentum," said Jaideep Mehta, vice-president and general manager for South Asia at IDC. 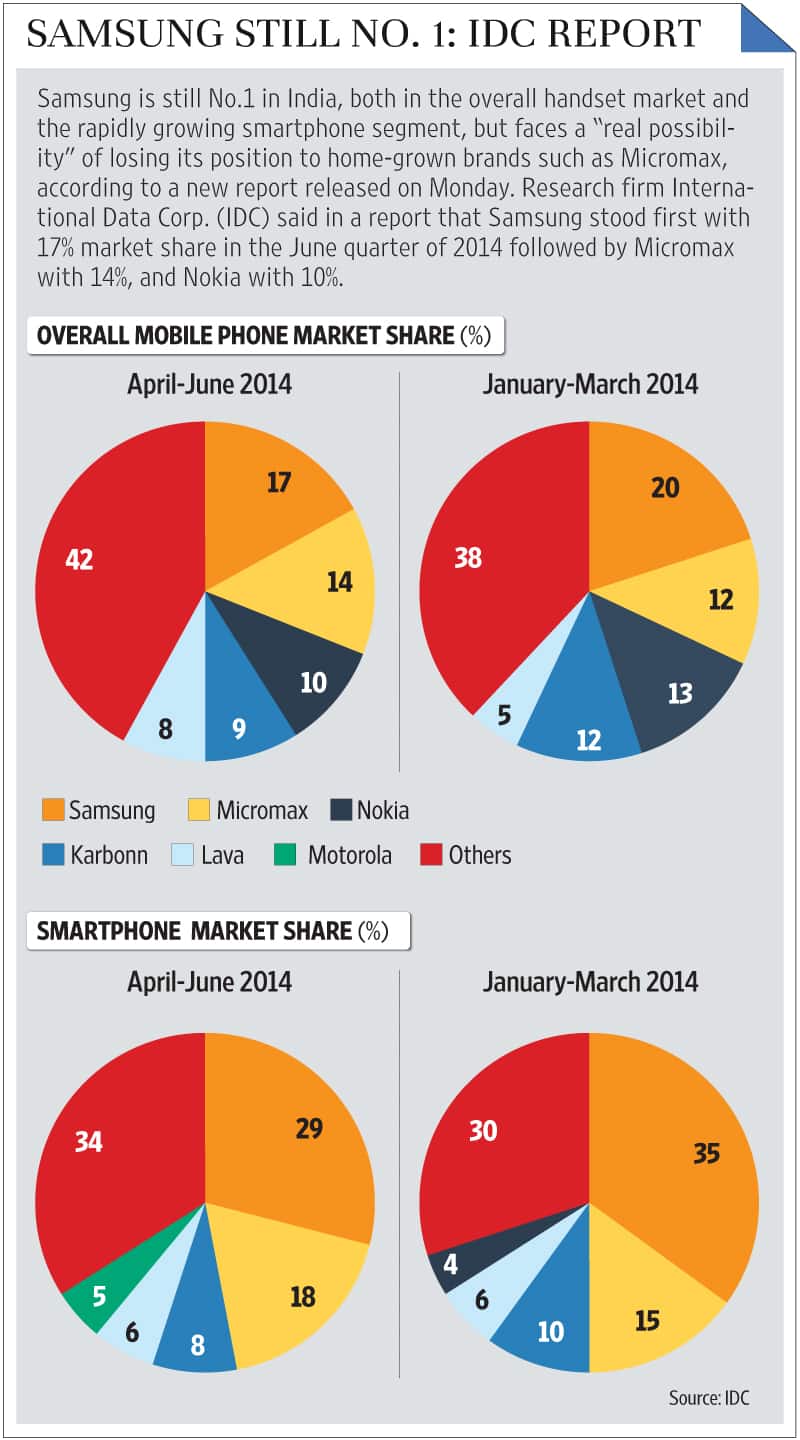 A 5 August report by Hong Kong-based Counterpoint Technology Market Research had estimated a 16.6% market share for Micromax in the three months ended June, higher than Samsung Electronics Co.’s 14.4%, creating a stir in the handset market.

“Given the current growth rates, there is a real possibility of seeing vendor positions change in the remaining quarters this year," said Mehta.

The overall India mobile phone market stood at 63.21 million units in the June quarter, a 5% growth over the preceding quarter, while the smartphone market in the country grew by 84% in the quarter with vendors shipping a total of 18.42 million units as compared with 10.02 million in the same period a year ago.

IDC has projected a high growth potential for the smartphone market, which grew 11% sequentially, as 71% of the total market continues to be on feature phones.

Samsung, meanwhile, continued to dominate the smartphone market at 29% share, while Micromax held 18% of the market share. The rest of the top five vendors in the segment included Karbonn Mobiles, Lava International Ltd and Motorola Mobility LLC with 8%, 6% and 5% market shares, respectively.

The IDC report noted that the sub-$200 category of the smartphone market was increasing in terms of shipment share, with contribution from this category standing at 81% in the June quarter.

“With the influx of Chinese vendors and Mozilla’s plans to enter the smartphone category at $50 level, the low-end segment of the smartphone market will become crucial in the coming quarters," it said.

The IDC report observed that a new entry level price point is being breached by Indian home-grown vendors every quarter.

“These devices are not equipped with high end specifications and RAM (random access memory) is typically 256 MB. This ultra low-cost segment may not sound a viable option to the repeat buyers, but it works well on the targeted segment", said Karan Thakkar, senior market analyst at IDC India.

Among the top five vendors, only Micromax and Lava could outstrip the market growth: the former grew 18% and the latter, 54%, in the overall handset business.