Although the Delhi team boasting a perfect record from three outings made only a modest 143-7 in their 20 overs at Centurion Park, they held a slender edge until the closing overs of the Rajasthan innings. 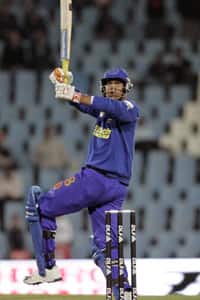 In trouble at 64-5 when captain and Australia legend Shane Warne was an unhappy stumping victim for a duck, Royals deperately needed saviours and found them in Pathan and South Africa captain Graeme Smith.

Quickfire Pathan struck six sixes and three fours in his 30-ball spell at the crease while the unbeaten 44 of the more cautious Smith included five fours.

Ashish Mishra was easily the most successful Delhi bowler with 3-34 in four overs while no one suffered more than New Zealand veteran Daniel Vettori, who conceded 32 runs in 12 balls.

Winning the toss and opting to bat, Delhi lost the wickets of openers Gautam Gambhir (8) and Virender Sehwag (16) to Dimitri Mascarenhas in the third over and were indebted to South African AB de Villiers.

He struck one six and five fours off 40 balls at his provincial home ground before being trapped leg before by Warne having completed his half century in perfect conditions on a wicket expected to yield more runs.