Sepang: Force India said Sunday they would appeal for a higher pay-out after Caterham were found to have copied bits of their Formula One car, comparing the case to the explosive “Spygate" scandal.

The Indian team were awarded €25,000 ($33,200) in damages this week after a High Court judge in London found Caterham used Force India computer files stored at an engineering company when developing their debut car in 2009.

Force India were also ordered to pay €850,000 in unpaid fees to the engineering firm, Italy’s Aerolab. Deputy team principal Robert Fernley said the sum was deposited with the court long ago.

But he told AFP that Force India were “deeply disappointed" with their small pay-out, insisting that the copyright infringement had helped saved Caterham, formerly Team Lotus, millions of dollars in development costs.

Force India will ask for court permission to appeal the case, which first came to light from magazine pictures, and they will also refer it to the Federation Internationale de l’Automobile (FIA), the sport’s governing body.

“We’ll appeal (in court) against all of the commercial side of it because we feel that the damages that were awarded is not representative of the cost of Formula One development," Fernley said in an interview at the Malaysian Grand Prix.

“If you read into (the court judgement) there are admissions of copying on all aspects of (the car). And then there’s an admission on downloading all of those files and bringing them across into the UK and uploading them."

Although the London court did not find evidence of systematic copying, Fernley said using Force India’s data as a shortcut had given Caterham a significant head-start in the costly world of Formula One.

He said a closely related case was also the subject of criminal charges in Italy after prosecutors there seized servers belonging to Aerolab, which has been engaged by both Force India and Caterham.

Fernley said Caterham had unveiled their car just two months after gaining entry into Formula One in September 2009, describing the swift turnaround as a “miracle". 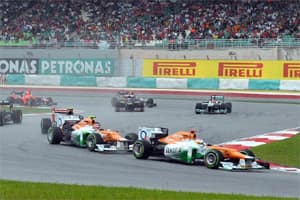 “But even three years on they’ve not progressed that. So it shows how difficult it is. So to be able to take, as the judge says, a shortcut, has enormous benefit.

“First of all it saves you millions of pounds and secondly it puts you straight into position."

Caterham has finished 10th in the constructors’ standings, above HRT and Marussia, in both its two seasons so far. It has not commented directly on the case, although its lawyers called the outcome “very satisfactory".

“In November 2009 pictures of the Team Lotus model were put into the magazines. And the thing that drew our attention to that was actually the tyres. They had used Force India’s Bridgestone tyres on that model.

“But when we looked at the model closer it also looked like other things had been copied. So we asked Team Lotus, is there anything you’d like to share with us?"

While Force India are at pains not to be put pressure on FIA, Fernley said the governing body’s reaction to the case could have important ramifications for Formula One.

“There’s some very interesting scenarios you could play with. If nothing is done and that accepts that copying is OK, that means a free-for-all in the paddock," Fernley said.

“Equally if nothing is done, could McLaren claim their $100 million back? If the FIA decide it’s something they have to look at and they do sanction against Caterham, it could cost Caterham tens of millions."