I knew we had a pretty good plan in place where content, distribution and scheduling was concerned, which immediately differentiated us from other GECs (general entertainment channels). But what I didn’t know is that we were going to be so successful from Day 1," says Rajesh Kamat, chief executive of Colors. He still wears a look of disbelief on his face as he talks about how Colors spiralled to the No. 2 spot in the competitive general entertainment space within 10 weeks of its launch in July.

Listen to audio abstract of campaign inside

The ease with which Colors, the Hindi GEC of Viacom 18 Media Pvt. Ltd, a joint venture between US media conglomerate Viacom Inc. and Indian media house Network 18 Media and Investments Ltd, managed to rise is surprising. There had been only one leader in the GEC space till then—Star Plus. The GEC run by Star India Pvt. Ltd, a News Corp. subsidiary, had held on to the top spot by a wide margin for nine years. When Colors debuted, the contenders included Zee Television of Zee Entertainment Enterprises Ltd and Sony Entertainment Television of Multi Screen Media Pvt. Ltd, which complacently occupied the No. 2 and No. 3 slots, respectively, waking up only when a new entrant—such as NDTV Imagine of New Delhi Television Ltd or 9X of INX Media Pvt. Ltd—joined the race. But for all the high-voltage launches and marketing campaigns, these newcomers failed to make a real dent—and it was back to the status quo. 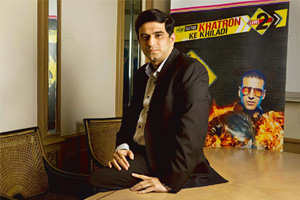 Dream run: Colors CEO Rajesh Kamat says the channel had to cancel a few shows and change some to arrive at an ideal mix which was differentiated and disruptive. Madhu Kapparath / Mint

Colors changed all that.

Certain strategic challenges faced by this genre had till then virtually ruled out any changes in the channel hierarchy. First, the cost of content had been going up steadily. According to estimates by a media buying agency which did not want to be named, a 30-minute episode of a big-ticket programme, which cost Rs2-3 crore in 2000, now costs Rs20-30 crore to make.

Second, the overall share in total viewership had been declining. According to TAM Media Research Pvt. Ltd, a Mumbai-based television audience measurement agency, the viewership share for the Hindi GEC genre fell from 24.2% in 2004 to 22.6% in 2007 before moving up to 23.2% in 2008.

Industry professionals put this down to changes in the television- watching habits of consumers. Viewers wanted newer, shorter shows with an international appeal. The days of 52-episode family dramas or religious serials were over. “A sense of fatigue had set into the whole saas-bahu saga and the Ramayana and Mahabharata serials...there was a dire need for differentiated content to pull viewers back into this genre...and that is exactly what Colors did," says Hiren Pandit, managing partner of GroupM ESP, the entertainment, sports and partnerships division of media buyer GroupM.

Agrees Kamat: “We broke a certain monotony that was setting into the Hindi GEC space with the soaps and serials that were based on one common theme...this formula was clearly not working. So we decided to come in with new content, new faces and basically things that viewers cannot associate another channel or programme with—it had to be fresh."

Their launch had its share of criticism. Industry experts were dismissive, saying the channel had no future, especially because its parent companies, Viacom and Network 18, brought little experience to this genre. Viacom had not had much success with the children’s channel Nickelodeon, while its music channel MTV had slipped from the top rank.

“The companies that launched Colors did not have a track record in this space. The challenge for them was, will they have distribution in place and how will they cope with the high carriage fees?" says Pandit.

All doubts were soon put to rest. Colors had an impressive 81 gross rating points, or GRPs, in its debut week starting 20 July. The ranking that week was: Star Plus (315 GRPs), Zee TV (216), Sony Entertainment Television (99), NDTV Imagine (94) and 9X (87)—GRP is the sum of ratings achieved by a specific media vehicle or schedule; it represents the percentage of the target audience reached by a programme. Colors had a 7% viewership share against Star Plus’ 27% and Zee TV’s 19%.

Eight months after its launch, Colors is a well-entrenched channel available in 66.8 million homes, with a 24% market share. The channel has 200 of the 280 advertisers in the Hindi GEC space on board, up from 10 on the first day.

Its advertising rates are on a par with other leading channels, with a 10-second spot going for Rs1.5 lakh—at the beginning, it was as low as Rs20,000, according to a media buyer who did not want to be named. According to industry watchers, the channel clocked Rs300 crore in turnover in October-December, though company officials declined to confirm the figure.

The channel’s success has had other benefits. “Colors has done two things. First, it has expanded the Hindi GEC pie. Earlier, it was eight or nine channels attracting 800-1,000 GRPs but after Colors, it has increased to 1,200," says Anand Shah, media research analyst at Mumbai-based Angel Broking Ltd. “Secondly, because of Colors, Star Plus and Zee started evaluating their programming strategy," says Shah. “Saas-bahu episodes were not working so Star did away with it... new and improved programme is unfolding from the existing players of the Hindi GEC genre."

In some time bands, the channel is giving Star Plus a run for its money. Its flagship programme Balika Vadhu has consistently outperformed programmes on rival channels in the same time slot. According to Colors, the serial had the highest TVR of 10.18% on 26 February. TVR, or television viewership rating, is the proportion of the potential TV audience that watches a programme.

Since September, Star Plus has begun doing away with the ‘K’ serials produced by Ekta Kapoor, and this month will see some more family dramas going off-air. “There is intense competition among the channels. Colors has some good shows (and) so does Zee. Star One, Sony and NDTV Imagine also have been launching shows in the last couple of months. Add to that the fact that there is a new channel... (Real)," says Keertan Adyanthaya, executive vice-president and general manager, Star Plus.

New programme offerings are indeed the new mantra. Star Plus is launching four new shows for its prime-time spot, including a soap called Sabki Laadli—Bebo about a family that craves a girl child—interestingly, a completely different take from the new soap on female infanticide lined up for Colors, Na Aana Is Des Laado.

For Zee TV, programmes such as reality dance show Dance India Dance and Chhoti Bahu, a soap that also strategically stays away from the saas- bahu theme, have proved beneficial. The channel had inched closer to Colors by the end of February.

Luck apart, industry professionals say Colors’ disruptive programming strategy did the trick. “Colors (was) launched with two blockbuster properties Khatron Ke Khiladi and Bigg Boss 2, which won them the eyeballs immediately. Then for soaps they addressed social issues and stayed away from the family drama," says a senior media buying expert involved with the channel who did not want to be named.

Agrees Kamat: “Our learnings from other channels were that we needed a big-ticket item for the launch. We were confident about our distribution but it was content we were looking out for. We had to cancel a few shows and change a few shows to arrive at an ideal mix which was differentiated and disruptive. As regards marketing, we leveraged on the strength of the network to funnel audiences to us initially."

Apart from the risks it took on the programming front, the channel also spent close to Rs40 crore on promotion, according to a senior advertising executive who did not want to be named. Colors had an added advantage in that it is a free-to-air channel and was able to establish a large viewer base within a short time. Most of its rivals are pay channels.

But as the dream run continues for Colors, its team isn’t ignoring reality. “We have pinched ourselves often but we have to get ‘real’, no pun intended," says Kamat, in a reference to Real, the Hindi GEC by Real Global Broadcasting Pvt. Ltd, or RGB, an equal joint venture between Alva Brothers Entertainment and Turner International that was launched on 3 March. Real poses a threat to all existing players with its established content production group of Miditech Pvt. Ltd, which has produced successful shows such as the Indian Idol series and Fame Gurukul for Sony and MAD, a children’s how-to-do programme, for Pogo, a Turner channel.

Real is following in the footsteps of Colors: It had a similar launch strategy and an equally big marketing campaign. It has debuted with two big-ticket properties, including the reality show Sitaron Ko Choona Hai and Ninja Pandav, a serial on martial art experts who save the world from destruction.

“We need to be very distinctive in our offerings, which is why we have deliberately chosen our proposition of being about real people and real entertainment—it will be reality TV and drama side by side," says Sunil Lulla, director, RGB. “The Hindi GEC now has some 12 players, so there is (an) opportunity for segmentation and differential offerings, so channels will look at different ways of entertaining people and creating a space for themselves."

Colors is working to ensure this year is as successful for it. To begin with, it is expected to become a pay channel from 1 April. Further, it has added four shows to its portfolio—Na Aana Is Des Laado and Mere Ghar Aayi Ek Nanhi Pari, a horror show Koi Aane Ko Hai, and reality show Chhote Miyan Bade Miyan. There is also Fear Factor-Khatron Ke Khiladi Level 2 and the third season of Bigg Boss.

It is also entering the afternoon space in three months. “Prime-time TV is still the breadwinner, and afternoon yield is the lowest, but from a channel’s strategy standpoint you need to have (the) afternoon to de-risk the ratings," says Kamat.

Kamat is unfazed by the current slowdown and apprehensions of a fall in ad revenues. “The shares in the ad revenue pie will certainly be realigned now. We now have a 23-25% share in viewership in the GEC space and we want to match that in terms of ad revenue pie. We are on track to match that objective," he says.

The channel will benefit from negotiating from a position of strength—with GRPs having crossed the 250 mark a few times, the effective ad rates it asks for and gets will be much higher. If it was nibbling at the leftovers last season, since advertising money typically gets allocated in March-April for the entire fiscal, this time it can pick and choose. The channel is looking at getting on board another 50-60 advertisers. “All these will see us through in a year which is otherwise expected to be more challenging," says Kamat.