The use of digital media was one of the highlights of the Lok Sabha election. With almost 40% of the voters under 35, and a majority of them using digital media such as the Internet and mobile phones to access information and express their opinions, these mediums were used aggressively by the mainstream parties to engage them. 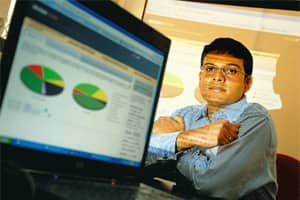 Germinait Solutions Pvt Ltd, Founder and CEO: Ranjit Nair - This year-old start-up developed the ElectionTracker, an online service based on artificial intelligence technology that trawls the Internet for information on politicians and parties. This data is then aggregated and analysed. The firm hopes to sell the service in markets abroad. Ashesh Shah / Mint

The demand for a platform for dialogue between the governed and those seeking to govern saw some smart upcoming and existing digital companies creating a slew of new products and services, such as bulk-calling services on cellphones, tools to conduct mobile phone surveys and artificial intelligence-based, or AI-based, software, that could track, even analyse, voter sentiments online.

“This was India’s first Internet election and (it) marks the beginning of a digital democracy," says Rishi Jaitly, senior policy analyst, Google India Pvt. Ltd, whose role was to evangelize the benefits of Internet usage for election campaigns among the country’s political class.

According to ViziSense, an online audience measurement service of the Mumbai-based digital marketing and technology company Komli Media Pvt. Ltd, at least four million unique users searched the Internet for information on politics and politicians in April alone.

In Delhi, Viplav Communications Pvt. Ltd, a start-up that has identified electoral process and e-governance as one of its key areas of operations, put together a portfolio of digital tools and services. One such service, the SuperCaller, essentially a digital tool, can make at least 500,000 phone calls a day.

SuperCaller was used by Congress candidate Jyotiraditya Scindia in Guna in Madhya Pradesh and by several Biju Janata Dal, or BJD, candidates in Orissa to reach out to voters. “By using SuperCaller, a politician can reach all the voters in Orissa for a total cost of Rs50 lakh. In contrast, one rally in a distant town reached by a helicopter can cost Rs7–8 lakh," says Pallav Pandey, CEO, Viplav Communications.

An IIT Kanpur graduate, Pandey worked in the US for a digital company for several years before returning to India in 2003 to set up Viplav Communications. “I was socially motivated in those days and wanted to contribute to a change in the system, and the political system is where I decided to begin," he says. His first goal was to help politicians manage their constituencies efficiently, using technology to generate research and data.

Viplav Communications began by offering constituency management services to politicians such as Scindia. It then worked for the Bharatiya Janata Party, or BJP, in Goa and this year, anchored the BJD campaign in Orissa. Viplav Communications Pvt Ltd, CEO: Pallav Pandey - For the general election, the Delhi-based start-up put together a digital portfolio that included services such as the SuperCaller, which can make 500,000 calls a day. This cost-effective tool was used by the BJD in Orissa. Harikrishna Katragadda / Mint

The company also built software to check whether duplicate names were present in the voters list. “We used fuzzy logic to match names like Beena and Veena. This detects people registered more than once in the voter list," says Pandey.

In April, Germinait Solutions Pvt. Ltd, an year-old Mumbai-based start-up, launched ElectionTracker, an online service that trawls the Internet for information on politicians and their parties, then aggregates and analyses such data to isolate the prevailing sentiment.

“Our work was primarily based on areas of AI such as machine learning and natural language processing, technology that can be applied very easily to understanding unstructured content on online sites," says Ranjit Nair, CEO and founder, Germinait Solutions. The start-up had leveraged this tool to build applications for companies but was looking to showcase the technology with a high-profile application. “So when election 2009 was announced, we took it on as a challenge to see if we could adapt our platform to launch a tool for Internet users during the election."

The Germinait Solutions team worked overtime for nearly four weeks before ElectionTracker went online, an offering that Nair expects will be of interest primarily to media companies and others looking for processed content.

Political parties, too, are beginning to leverage the data processing inputs that technology firms can offer. In Orissa, Viplav Communications ran MSurvey, a cellphone service where voters were quizzed over the phone by surveyors even as their geographical location was tracked by global positioning system, or GPS, devices and fed into Viplav Communications’ server with voter-generated content. “Based on the results of our survey, the BJP-BJD alliance in Orissa was broken," claims Pandey.

Some digital companies also built e-governance and election-oriented tools this year because of the high visibility that the process delivers. Lifeblob.com, a website that runs a social timeline service (a form of digital diary that maps the social media that subscribers share on to a timeline), is a case in point. The website was looking for a platform to garner visibility for the timeline service, being used primarily for social networking. The idea of adapting it for use in the election by building a timeline for a mainstream politician came when the LifeBlob team saw the public reaction to Tata Tea Ltd’s Jaago Re (Wake Up) campaign.

“Once the Jaago Re campaign to energize urban voters began, we realized a lot of first-time voters do not have enough information about candidates," says Pranav Bhasin, co-founder and CEO, Aetas Technologies Pvt. Ltd, which launched the website Lifeblob.com. “Also, we had seen how digital tools were used extensively in the US campaign, and were able to make contact with the media cell of the BJP, which helped us showcase a timeline for L.K. Advani," says Bhasin, whose company went on to build timelines for BJP politicians such as Gujarat chief minister Narendra Modi. “Since we opened up the L.K. Advani timeline in March, we have got about 80–90 posts a week." Veiled power: Voters at a polling centre during the general election in Rajasthan. Arko Datta / Reuters

Another Mumbai-based organization, Democracy Connect, offered research support to members of Parliament, or MPs, and helped them initiate dialogues with voters and local government bodies by preparing background papers on prominent issues and highlighting the action points that MPs should focus on.

In this general election, the not-for–profit group was the knowledge partner for television channel CNN-IBN for a show that connected young voters with young parliamentarians.

Rajeev Gowda, professor of economics and social sciences at the Indian Institute of Management, Bangalore, and Sanjay Jha, a management consultant, floated Hamaracongress.com, an independent portal that aggregated online media content for the Congress and offered opinions and analysis on it.

Seasoned players such as Google also used the election to exploit the political fever online. Apart from setting up websites and blogs, the two main political parties, the BJP and the Congress, aired Internet videos on Youtube.com. The process was facilitated by the Indian team of the global technology giant.

Google helped set up a YouTube video for the Election Commission, or EC, showcasing the training of EC officials and the format adopted to administer and manage the 15th Lok Sabha election. For voters, there was Google India Election Centre, an online resource centre, where at least half-a-dozen non-government agencies collaborated with Google to upload data that would help voters find their constituencies online by keying in their address and access information about the current MP and aspiring candidates.

“We shared the content of the Indian Election Commission’s YouTube offering with South African government officials who were keen to understand the model followed by India," says Jaitly. “Even globally, the visibility for Indian election-related content is very high."

Even as these tools and services helped political parties and candidates tap the digital audience in a meaningful way, the big question is what the companies will do with the tools now that the election is over. Is it possible to build a revenue-earning model around these services, and can these be used by corporate clients to glean consumer trends?

“As politicians move from a commoditized communication model to a more targeted one, there is tremendous potential to use digital tools, but I am sceptical about whether it will be possible to create revenue models around such opportunities," says Ramesh Ramanathan, co-founder, Janaagraha, a Bangalore-based non-government organization that works in areas of citizenship and democracy.

The companies in question, however, are optimistic that their tools will be of use to corporate clients. Some of them have even identified potential areas.

“Building ElectionTracker in under four weeks has opened up a new area of opportunity," says Nair, who now expects to hawk the tool in markets globally. He says their success with ElectionTracker has helped them understand the way the AI technology platform can be adapted for political and corporate campaigns.

“All the products we have designed for political parties, such as SuperCaller, can now be offered to companies," says Pandey, who is looking to sell the product to companies such as Tata Sky Ltd, the direct-to-home television service provider, ICICI Bank and HDFC Bank. “Election work is cyclical but pre-recorded voice calls to subscribers and borrowers offer a more steady revenue model," says Pandey, who is looking to extend his portfolio beyond the political spectrum for the first time this year.

Similarly, executives at Germinait Solutions say the principles of artificial intelligence can be used for various corporate projects too. “All our products have a little AI in them, be it bots (software applications that run automated tasks over the Internet) that intelligently bid in online auctions, role-allocation software that allocates call centre workers to projects based on their skills or AI programmes that make sense of written text," says Nair, who has leveraged this platform to build two other products—an analysis of employee engagement in which around 200 companies participated and a tool to manage brand reputation for companies.

Companies are also building partnerships to tap new business opportunities. Viplav Communications, for example, helped process the voter list for Google and Janaagraha. “They used Viplav’s voter databases to make a voter search engine that was hosted on a Google site," says Pandey.

Some players say that staying in the political and e-governance space will also offer business opportunities because politicians will need to get more personal with voters who are now seeking a direct connect with them. “An MP cannot expect to connect with voters once every five years if we are to energize democracy, we need to help build systems that make the system more effective," says Tewari, who argues that there is scope for revenue models in this space too. “For the next four-five years, however, we expect to stay with the not-for-profit model."

Most of these sites are built around the premise that political engagement should not be a once-in-five-years event—the idea is to build a continuous engagement between the political system and citizens, something that is definitely easier to do through digital tools for communication and interaction.

“Ever since (the US President) Barack Obama used the Internet to win an election, it has done more for broadband adoption in the US than any law," says Jaitly.

“To build products and services for the political system, companies must understand the nuances of the system," cautions Gowda.