Indians spent the most on vehicles among consumer durables: NSSO data

Rural household enterprises spent 83.05% of the consumer durable spends on purchase of vehicles

New Delhi: Vehicles accounted for the highest share of the amount Indian households spent on consumer durables in 2014-15, according to new data released by the National Sample Survey Office (NSSO) on Wednesday—a data point that emphasizes both the importance of the domestic automotive market to global and local companies and the aspirational attraction of a set of wheels.

Indeed, the trend remains constant across rural and urban India, and across purchases made for household- or enterprise-use. The latter covers the use of vehicles for small businesses (such as that by a taxi driver).

The survey paints a picture of an aspirational yet traditional society—one where people are increasingly eating out, connected and want to look good (and are willing to spend to do so) and yet one where gold and silver jewellery remain preferred assets.

The second highest share of expenditure, across households in rural and urban India, was that of jewellery. The other main items of expenditure include cooling and heating devices such as air coolers, refrigerators, fans, geysers and electronic items such as computers, tablets and smart phones. The survey also provides insights on how India spends on services.

Urban and rural households spent the most on eating out, followed by transportation. Telephone bills, repairs, barber and beauty shops and television and radio services are the other major spends under services.

To be sure, services data excludes education and health services. 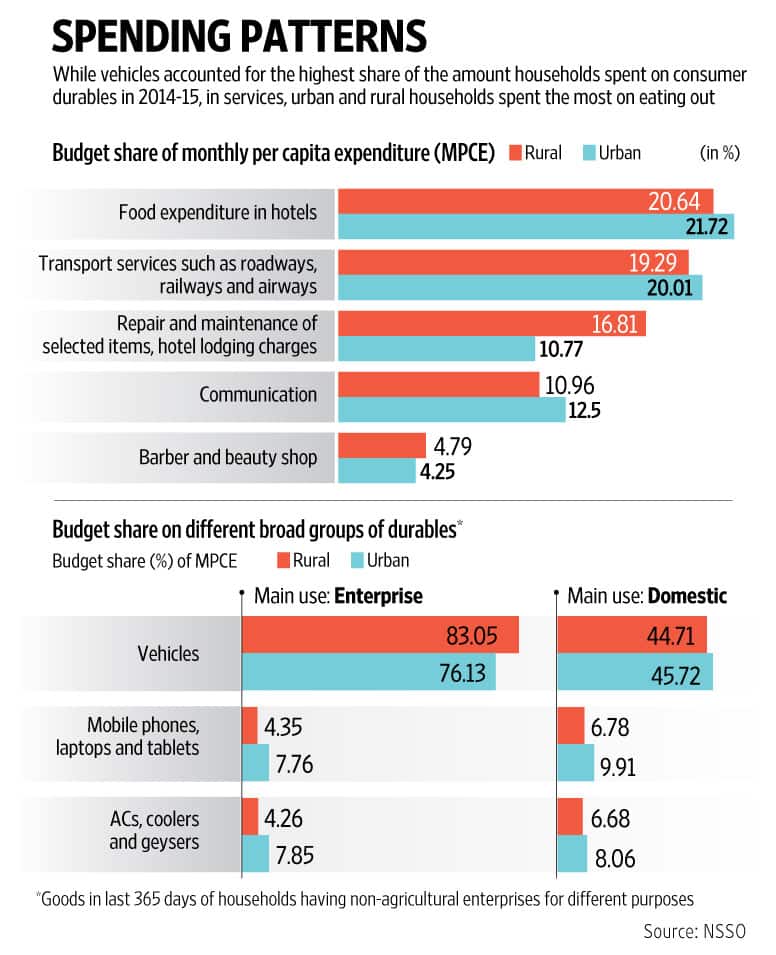 The first-of-its-kind survey on household expenditure on services and durable goods is derived from the 72nd round of the National Sample Survey and is for July 2014 to June 2015 period.

It was released on a day the recommendations of the Seventh Pay Commission were cleared by the Union cabinet and provides a glimpse of how (and how much) India spends on durables and services.

“Even though services constitute 60% of India’s gross domestic product, our database on services has been very weak. This seeks to correct that. Data with detailed consumer durable expenditure was also not available," said Himanshu, an associate professor at Jawaharlal Nehru University who uses only one name. “The spending on jewellery shows that it remains one of the important modes of investment in rural and urban areas. The high budget share of vehicles to a certain extent is because of their high value," added Himanshu, who is also a Mint columnist.

Rural households spent more than 23% of their expenditure on durable goods on purchasing jewellery and ornaments; the number was 18% in domestic urban households.

Among services, spending on eating out and transportation accounted for around 40% of the expenditure on services in both rural and urban households (with eating out edging out transportation in both). Both rural and urban households spent around 12% of their services expenditure on mobile bills and other communication services. All calculations are based on the average monthly per capita expenditure.

Arvind Singhal, chairman of Technopak Advisors Pvt. Ltd, a retail consultancy, said the numbers reflect the desire to improve the quality of life.

“The data shows how people are spending on consumer durables and services to improve their quality of life. In the next 12 months, you will see a higher proportion of spending on healthcare, education and mobile data services as telecom penetration increases," he said. “Gold enjoys a special place in the lives of Indians and spending on jewellery is only going to increase in the coming years as the number of people entering the marriageable age increases," he added.