Public opinion turns against the phone maker, after it allegedly left a blogger stranded in Germany

Did Samsung Electronics Co. Ltd take bloggers from India to Germany with the understanding that they were to cover the Internationale Funkausstellung (IFA) consumer electronics show in Berlin, only to change their roles from reporters to promoters at the last minute?

Or, was it a simple misunderstanding between the bloggers and the Korean electronics maker’s public relations team?

If you’re a full-time blogger, particularly in a country like India, where high-end tech products are still beyond the reach of most people, then access to the latest technology is difficult to come by and that leaves you dependent on the goodwill of electronics companies. 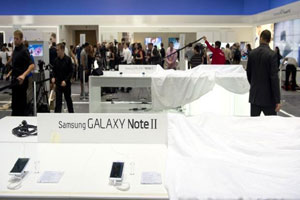 So, when one of them offers to take you to a major tech event, in exchange for making sure that their products get covered, it sounds reasonable. Particularly when the product is a high-profile one such as the Samsung Galaxy Note II smartphone, which you will cover anyway.

Clinton Jeff, a Delhi-based blogger who writes for the technology blog Unleash the Phones, took part in a contest that Samsung held and went to Berlin as part of the programme. In the invitation email, Jeff was asked if he wanted to travel as a reporter or as a promoter. He replied that he would be going as a reporter. Another blogger, who wants to be anonymous, also travelled on the same conditions.

Unfortunately, when they reached Berlin, Jeff was told that he had to wear a Samsung-branded shirt and would have to be in uniform, in the Samsung booths, every day, showing the company’s products to journalists. So, he was not a reporter then.

All this can be attributed to a miscommunication. Where it becomes complicated is that the entire incident took place in a foreign country. Jeff claims that when he demurred, he was told that his return ticket would be cancelled, and it would be up to him to make his way back to India.

The company is in the right here—one of the reasons why newspapers have rules regarding accepting gifts and junkets, and tend to list in minute detail what is allowed and what isn’t, is to avoid situations such as this one. Mint, in particular, doesn’t usually allow junkets. The miscommunication that occurred was about Jeff’s role—he was not going as a press observer, but as a blogger who won a contest to promote Samsung.

He owed Samsung certain obligations, and he refused to honour them. According to Jeff, he had been verbally assured by a Samsung representative that he would not be travelling as a promoter.

The problem was that Samsung responded by stranding him in Berlin.

Of course, the two sides would probably have resolved the issue. Unfortunately for Samsung, Finnish mobile phone maker Nokia Oyj’s representatives heard about the issue and the company has already taken care of Jeff’s accommodation and travel costs, and he is expected only to cover IFA as he had originally intended.

In the process, Nokia has earned a lot of goodwill for relatively little money, and to make matters worse for Samsung, the whole incident has been widely reported in leading tech blogs.

This isn’t the first such incident featuring the South Korean company, though. Earlier this year, a French blogger won a contest (also organized by Samsung) to write about “experiencing" the London Olympics. That blogger found herself working eight hours every day at the brand’s stores, under constant surveillance, with angry discussions over the “quality" of coverage. You can read the full account here http://goo.gl/yIOTg (in French, but Google Translate works well enough.)

Sure, all this isn’t new, and there are a lot of ways in which this happens. In some cases, “favoured" reviewers and analysts, whom the company has a very positive track record with, are offered travel expenses and early access because there’s little chance of a negative report. At other times, representatives will make comprehensive pitches, to try and influence what’s written.

But sometimes, particularly with bloggers, companies believe there is a definite quid pro quo.

That’s why Joshua Topolsky, editor of technology network The Verge, tweeted, “Bloggers: when you take a junket, you become an employee of the company you took the trip from. Please don’t confuse what it means."

Complicating matters, others who were present for these events give a different version of events. Technology blogger Amit Bhawani (director, Digital World Solutions, Hyderabad) was one of the other people who was a part of the Samsung IFA programme.

He points out that Samsung made clear from the beginning that there are two different categories—reporters and promoters. Reporters were invited only for the Samsung event, and were to leave on 1 September. Promoters would stay during the entire IFA, but would work in Samsung booths.

On his blog, Bhawani shows emails which make this clear. Jeff, however, says that while the distinction between reporters and promoters had been made clear, he was assured that his stay would be extended without his status being changed to a promoter.

And while Samsung is the one getting negative publicity right now, every tech company dangles carrots and waves sticks, particularly in a country like India where access remains a tricky issue.

The line between bloggers and reporters is more confused than ever. Jeff, for example, writes (as a freelancer) for the Hindustan Times, along with his own work at Unleash the Phones. (Hindustan Times and Mint are both published by HT Media Ltd.)

“We were continuously reminded that we were being sent to IFA to cover the launch of the (Samsung Galaxy) Note II, “ Jeff says. What happened was that they turned out to be in Berlin to demonstrate Samsung products for journalists.

An official statement from Samsung on the incident says: “Samsung Mob!lers is a voluntary community of active Samsung mobile device users, who are offered the opportunity to participate in our marketing events across the world. At these events, all activities they undertake are on a voluntary basis. No activities are forced upon them. We regret there was a misunderstanding between the Samsung Mob!lers coordinators and the relevant blogger, as we understand he was not sufficiently briefed on the nature of Samsung Mob!lers’ activities at IFA 2012. We have been attempting to get in touch with him."

Today, Scumbag Samsung is a trending topic on Twitter. Jokes such as: “And for our next trick, we’re going to make your return tickets disappear! Just like the battery life on our phones," are being passed around. It’s a public relations disaster and it may cost Samsung more than the cost of a ticket from Berlin to fix.