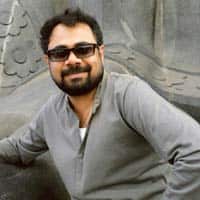 Film-maker Prakash Varma of Nirvana Films is best known for his work on the Hutch pug and the Vodafone Zoozoos. Having spent around 11 years in advertising, the film-maker has worked on award-winning ads for brands such as Hutch, Bajaj, Neo Sports, Saint Juice and Incredible India!

The new black and white ads for Adidas are created around the theme of cricket. The campaign focuses on athletes—a batsman, a bowler and a fielder—and highlights their attitude and the intensity they bring to the game. The ads end with the brand’s tag line Impossible is Nothing.

What did you think of the new campaign?

This new campaign for Adidas is definitely going to keep a lot of eyes glued to their TV sets. It’s a clutter breaker. I like the ad. What stands out for me is the treatment of the three films. The pace is arresting and so are the dramatic shots and the pulsating music.

Considering the number of ads using cricket as a concept, isn’t there a danger of being lost in the clutter? Just right: The Adidas campaign is well paced and dramatized.

In an ideal and rare combination, both the creative idea and the execution should be outstanding, and it should be difficult to tell which is better. However, the norm is to have either one as more dominant than the other. Examples of a great idea and a great execution together—can’t really come up with anything because it’s obviously quite a rare combination.

As far as sports brands are concerned, which is your favourite campaign and why?

Internationally my favourite campaign would be a film done for Nike’s Just do it called Before, directed by Lance Acord. This film is great conceptually and from an execution point of view. It’s all about the moment experienced by a large spectrum of different sportsmen and athletes just before they go on to perform and take on the final challenge. It’s very real—not staged at all and has great timing. It’s a film I thoroughly enjoy every time I watch it.

Another film that comes to mind is also done for Nike internationally. It’s directed by Guy Ritchie and is called Next Level. This film is great in execution. It’s not the classic film edit and shoot pattern. It is experimental, with the camera from one player’s point of view and perspective, going through the rigour of the football game,?the life outside off the field,?and so on.