TV loses grip on eyeballs and ads that want­ them

Remember this moment in 5-10 years, when it becomes obvious the television industry is in trouble.

Television has long been the favorite entertainment habit in America and beyond, and as a result TV commercials have been the world’s favourite way to sell people soda and laundry detergent. But that is changing.

Money spent globally on commercial spots in YouTube videos, Facebook feeds and news websites will overtake the ad dollars spent on TV commercials for the first time in 2017, research firm ZenithOptimedia confirmed in a new report.

Last year, Internet advertising was about 30% of all ad spending globally, and TV took about 37%. Next year, Zenith estimates ads online and on mobile devices will account for 36% of all advertising spent in the world, compared with 35% for TV. 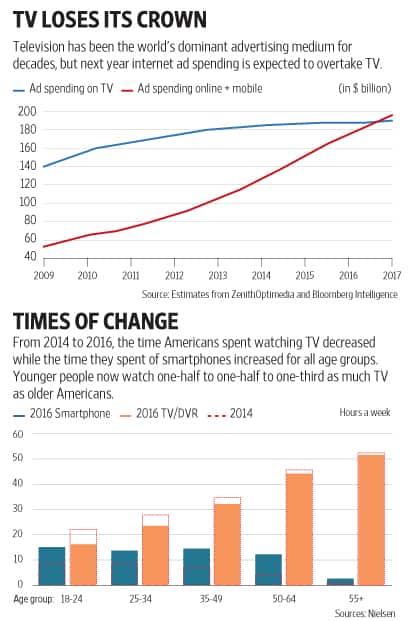 It’s hard to imagine TV losing its primary spot in our leisure time and in budgets of advertisers. After all, television has continuously reinvented itself for more than 50 years to keep up with the times. From the invention of cable TV to “time-shifted" viewing through DVRs and now TV programming online, the television industry is the world’s hippest baby boomer. And my Gadfly colleague Leila Abboud recently wrote about how the TV industry was fighting back against the technology die-hards predicting the demise of the 30-second commercial spot.

But change is inevitable. Ad dollars eventually, even if it takes a while, follow eyeballs. And the eyeball demographics are not in TV’s favour.

Young people are still spending big chunks of their time watching TV, but the youngs are finding different ways to waste their lives. On average, Americans 18 to 24 years old watch 16 hours and 18 minutes of TV each week, or more than two hours a day, according to Nielsen. That is a lot, but people less than a generation older in the 35-to-49-year-old range watch on average more than 32 hours of TV each week, or four-and-half hours a day, Nielsen estimates.

This is the TV gap. An average 18-to-24 year old spends half as much time watching TV as a cohort just a bit older. Just two years ago, young adults watched more TV than they do now.

Young people who shift their time from TV to their smartphones are giving fuel to web companies that badly want to break TV’s hold on “brand" advertising—that is, commercials that make you feel good about drinking a Budweiser or driving a Hyundai.

Facebook Inc., Google (Alphabet Inc.), Twitter Inc., AOL Inc. and every other web and media company is pushing into live web video in a grab for those brand ads. It’s not as if Budweiser (Anheuser-Busch InBev SA/NV) is going to stop advertising during the Super Bowl next year, but live web video will slowly, inexorably steal brand ad money from television.

So far, the internet’s advertising gains have come mostly at the expense of newspapers and magazines, and TV has carried on relatively unscathed. TV versus Internet also isn’t a clear-cut rivalry. The two sides are working together in ways that mean a dollar of advertising spent online doesn’t entirely take a dollar out of the pockets of a TV company. For example, TV old guard AViacom Inc. struck a deal to sell ads on behalf of Snapchat—the favourite youth alternative to TV.

Still, the total market for advertising isn’t growing much and Internet’s gain will inevitably erode TV’s role as the advertising top dog. Change in advertising spending happens slowly, and then all at once. You can almost see the moment around 2007 to 2008 when newspaper advertising fell off a cliff—many years after people had started to sound the alarm about Craigslist Inc., Google and other threats to newspapers’ traditional advertising base.

It will only be obvious in hindsight if and when the same thing happens to television advertising spending. I will always love you, TV. But your moment on top is drawing to a close. Bloomberg

This column does not necessarily reflect the opinion of Bloomberg and its owners.