London: Former Pakistan Test captain Salman Butt and fast bowler Mohammad Asif were found guilty on Tuesday of involvement in a spot-fixing betting scam during a match against England in 2010. 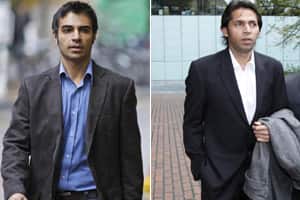 Salman Butt(L) and Mohammad Asif at the Southwark court in London, on 1 November 2011. AP

Asif, 28, was found guilty on the second count but the jury have not yet reached a decision on whether he is guilty of conspiracy to obtain and accept corrupt payments.

Both had pleaded not guilty to the charges.

Prosecutors alleged that the pair conspired with British agent Mazher Majeed and bowler Mohammad Aamer to deliver three intentional no-balls during the Lord’s Test between Pakistan and England in August 2010.