Television viewership likely to fall as India bowled out of T20

Television viewership likely to fall as India bowled out of T20

“It is extremely disappointing for us that India is out of the game because what one has observed is that television ratings in an India game are more than double of what they are otherwise," said Anisha Motwani, chief marketing officer, new markets, Max New York Life Insurance Co. Ltd, one of the associate sponsors of the tournament on ESPN’s Star Cricket channel that telecasts the matches. 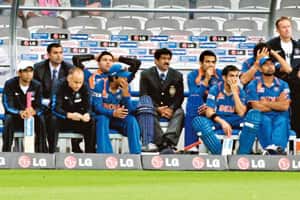 Tense moment: Team India reacts as it heads towards defeat against England in its T20 World Cup cricket match in London on Sunday.

“Now that India’s out of the game, television viewership on ESPN will suffer because no matter how good the game is, if India is not playing, there is always less rush and excitement," said Priti Murthy, national director, Insights at Maxus, one of the media buying agencies of GroupM India Pvt. Ltd. Adding “this will hurt advertisers who have invested heavily in the game".

“I don’t see a shortfall of advertisers because we’re all sold out. We had saved up some amount of inventory to be sold during the finals but we have managed to sell even this in the last few days," said Sanjay Kailash, sales and marketing head, ESPN Star Sports. He did not disclose if the remaining inventory was sold at a premium.

“I’m not sure if the advertisers will get their money’s worth," said a senior executive from a media buying agency, who did not want to be identified. He pointed out that ESPN generated Rs220 crore in ad revenues nearly a month before the tournament started and was aiming to get another Rs20 crore by selling advertising spots at a premium in the semi finals and finals, which “now does not look possible with India no longer playing".

Industry experts believe the overwhelming advertiser response came because India won the T20 World Cup title in 2007, which pushed TRPs to historic highs. Further, this tournament came on the heels of the Indian Premier League (IPL), the 20 over domestic league tournament that garnered strong viewer response for two consecutive years.

Besides fuelling advertiser interest, experts believe the IPL format which allows as many as 10 international players in each team and four in a playing squad of 11, also changed the “loyalty factor" in the way Indians view cricket, and this may work in favour of ESPN and advertisers in the coming matches.

“If you see the ratings on TV for the non-India matches, they are as bad as they once were which gives you the feeling that people have started appreciating a good game and to some extent IPL is to thank for that," said Motwani.