New Delhi: Want a kiss from actress Rakhi Sawant? Log on to the online game based on her reality television show Rakhi Ka Swayamvar. Catching a smooch or a ring or a garland fetches you a high score—but beware of the rolling pins, brooms and eggs that she also throws at you.

Or, you can try out the gaming version of Pati Patni Aur Woh, another reality show on NDTV Imagine, and feed and clean up crying babies online. 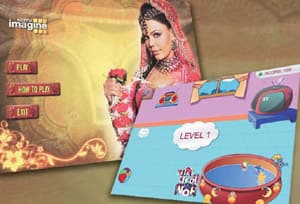 “Games based on reality shows are a good way to attract new viewers to general entertainment channels, especially young people who are not so much into television," said Nikhil Madhok, vice-president of marketing and communications at NDTV Imagine. “They are more active online and gaming is an excellent option."

Colors started Abhishekaaramclasses.com even before its reality show Bingo, hosted by actor Abhishek Bachchan—although the website did not exactly allow visitors to play the game.

“We will soon be launching an online game based on earning points and building a house for the players," said Rameet Arora, the channel’s marketing head.

Star Plus has launched its television shows such as Kya Aap Paanchvi Paas Se Tez Hain across platforms—including Internet, cellphones, and interactive television. The channel’s pilgrimage reality show Mahayatra is even available as a board game.

Anupam Vasudev, the channel’s chief marketing officer, said reality shows were fast-paced and short-lived. Besides, competition in the space had increased and getting people to participate and watch shows had become more difficult than before. “Games have become important to enhance audience interaction."

Games are a cost-effective way for a television channel to promote its shows, said Arun Mehra, chief operating officer of Zapak.

“On an average, it takes Rs3-7 lakh to create a game around a reality show," Mehra said. “It reaches the right audience and is the most cost-effective medium today."

“Each of these games has done exceptionally well. Rakhi Ka Swayamvar featured among the top five game list on Zapak.com in just four days of its launch," said Mehra.

Vishal Gondal, founder and chief executive of Indiagames, said reality shows lend themselves to gaming as viewers are keenly involved with the storyline and the characters.

“We did (Sony’s) Bigg Boss on mobile, which was lapped up by the hardcore fans of the show. We are working on a number of TV show ideas which you will be seeing on mobile, online and on (social) networks like Facebook," he said.

Indiagames also launched an arcade game based on Kya Aap Paanchvi Paas Se Tez Hain, which was set up at gaming parlours, shopping malls and other spaces where young people congregated.

Television executives and industry watchers agree there is a limit to online gaming’s impact.

Arora of Colors said gaming for reality shows was, in the end, just a mode of promotion. The slow speed of Internet access in many areas isn’t conducive to the growth of high-level gaming in the country.

Meanwhile, it will be some time before gaming starts generating revenue for television channels, said Smita Jha, media and entertainment analyst at PricewaterhouseCoopers. “At present gaming is a medium for promotion and not revenue," Jha said. “It is an added touch point for advertisers, but still very niche to actually convert into a revenue-generating venture."

However, Deepak Dhar, managing director of international production house Endemol India Pvt. Ltd, which has made shows such as Bigg Boss, Khatron Ke Khiladi and The Great Indian Laughter Challenge, is optimistic about the future of online gaming.

“There has been a phenomenal response to this medium," he said. “It’s only a matter of time" before it turns into “a revenue stream for the shows".