London: The London Olympics closed in a blaze of music and colour on Sunday after a two-week sporting festival that electrified the host nation and was watched by billions around the world. 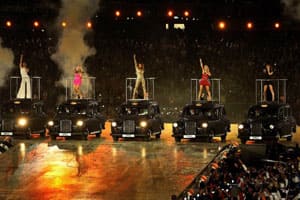 “Through your commitment to fair play, your respect for opponents, and your grace in defeat as well as in victory, you have earned the right to be called Olympians," Rogge said. “These were happy and glorious Games."

The ceremony also saw the handover of the Olympic flag to the Mayor of Rio de Janeiro, a symbolic transfer which launches the four-year countdown to the 2016 Games to be held in the Brazilian city.

The US topped the medals table with 46 golds, eight ahead of China, while Britain had 29—their best since 1904. It was the first Games where every team had at least one female athlete.

After 16 full days of competition, 302 Olympic titles were handed out and 46 world records were broken. More than seven million fans came out to watch Olympic events, and Bolt’s 200m win generated a record 80,000 tweets a minute.

“Today was the closing of a wonderful Games in a wonderful city. We lit the flame and we lit up the world," said Games chief Sebastian Coe.

Prime Minister David Cameron received congratulations from US President Barack Obama, who called him to praise the organization and the performance of the British team.

“We reminded ourselves what we can do and, yes, we demonstrated that you should never ever count Team GB (Great Britain) down and out," Cameron said earlier.

Cameron said the Games had reflected the best of Britain’s multicultural make-up, taking the example of Mo Farah, the winner of the men’s 10,000 title who went on to claim gold in the 5,000m on Saturday.

Farah came to Britain as a refugee aged eight after spending his early years in Somalia and Djibouti.

“It’s a Britain where a boy born in Somalia, Mo Farah, can come here, seize opportunities, and run his way into the nation’s heart," Cameron said.

“It’s a Britain where we cheer ourselves hoarse not just for Team GB, but for Team Jamaica or, as people have just done on the Mall, Team Uganda," he added, referring to the winner of Sunday’s men’s marathon Stephen Kiprotich.

“Over the past couple of weeks, we have looked in the mirror and we like what we have seen as a country," he said.

Britain’s newspapers on Monday reflected the country’s new-found pride, but also betrayed a tinge of sadness that the Games were over.

“Thanks, it’s been a blast," said the Daily Telegraph’s front page, while the Guardian bade “Goodbye to the Glorious Games".

“No one is as surprised as the hosts that this fraught and complex festival of striving should have gone so well," said The Times, calling the Games a “great exhibition of competence, creativity, athleticism and sportsmanship."

The final day of sport saw 15 medals decided, with the US’s Dream Team wrapping up victory over Spain in the basketball final as the Americans cemented their place on top of the medal table ahead of China.

The last day started in traditional style with the men’s marathon, with Kiprotich delivering only Uganda’s second ever Olympic gold medal in a race that finished in the shadow of Buckingham Palace.

Teenager Robeisy Ramirez joined the long list of Cuban Olympic ring kings with a victory in the flyweight final over Mongolia’s Tugstsogt Nyambayar.

“The moment I heard I won I fell on the floor because it was overwhelming. I am 18 years old and I am already an Olympic champion," said the teenager. AFP