Tally Economics | What it takes to win medals

Tally Economics | What it takes to win medals

Reading the Olympics medals tally is something even the lay follower, leave aside the inveterate sports buff, cannot do without. It is a ready reckoner of sorts to what’s been happening at the Games. But while it can make exciting reading, the medals tally can also be confounding. 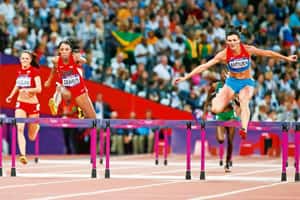 Leap of faith: Russia’s Natalya Antyukh (right) on her way to winning the 400m hurdles. With 11 gold medals, Russia is in fifth position in the medal tally among the countries with most golds. Photo: Lucy Nicholson/Reuters

Should gold get more weightage than silver or bronze? If so, how much more? Where the issue gets into a bigger rigmarole—and gives rise to profuse and contentious theories—is when these medals are seen as metaphors of socio-eco-political systems that work—or don’t. (For the record, India figures at 46 in the official tally and 38 in the American one.)

For instance, American sport is almost entirely run by private money and enterprise, while China’s is entirely state-run. Britain and Australia are a mix of the two. If Germany and Italy are strong examples of free-enterprise, democratic societies excelling at sport, Cuba and the Democratic People’s Republic of Korea are fine studies on how socialistic economies are right up there too.

Indices of gross domestic product (GDP), per capita income and population find significance too, but it is not only money which produces champions, else the rich Middle East countries would be reaping a fine harvest of medals. Why, even India has spent more than a crore of rupees per athlete for the London Olympics.

In India’s case, London represents the best-ever performance with four medals, but considering that two medals were won at Helsinki 1952, the tardy rate of progress is self-evident. The inflection point—the rise from low to high—for China, Britain, Australia, South Korea (there are other examples too)—has come with the introduction of a strong and focused sports curriculum aimed at spotting talent young, and spending vast resources in nurturing them to elite athlete status. This is the only formula that seems irrefutable as the stories of almost every athlete who has won a medal at the London Games would suggest.

For instance, after beating M.C. Mary Kom in the 51kg flyweight boxing semi-final bout on Wednesday, Britain’s Nicola Adams said, “I am training since I was 12 and to think I am now nearly there…"

Contrast this with Mary Kom, who started boxing at only 17, then has had a tortuous 12 years to reach where she has and you get an idea of why India languishes in the medals table—and what needs to be done.