Sao Paulo: Miss Angola Leila Lopes, a business student from the town of Benguela in her home country, was crowned Miss Universe on Monday after dazzling a panel of judges with her beauty and impressing them with her brain. 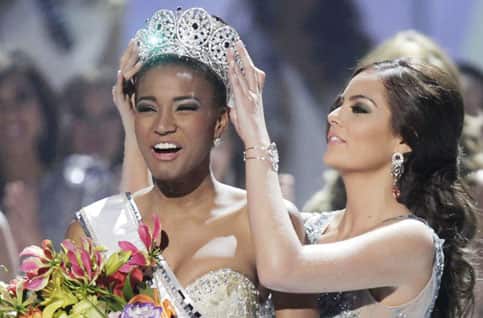 Earlier in the contest, Lopes had been asked what she might change about her physical characteristics if she could, but Lopes said she was satisfied with who she was.

“I consider myself a woman endowed with inner beauty," she told the judges and the audience. “I have acquired many wonderful principles from my family, and I plan to follow those through the rest of my life."

Lopes takes her place as the winner of the 60th annual Miss Universe pageant.

It is an annual event watched by millions of people around the world on TV who cheer for the young women competing in categories ranging from swimsuits to evening gowns. They also must answer the critical question that tells the judges a bit about them.

Lopes had worn a bright bikini, then paraded around the stage with poise in a form-fitting evening gown colored in gold and silver sequins and feathers.

In fan voting, Lopes tallied only a 3.6 score for the swimsuit but earned a 7.2 for her evening gown. Fan voting, however, did not count in the final tallies from nine judges.

The panelists, who ranged from race car driver Helio Castroneves to actress Vivica A. Fox and journalist Connie Chung, scored the women on each contest, narrowing from a group of 16 down to a final five that included women from China, the Philippines and the home country, Brazil. In all, 89 women competed for the title.

The show was hosted by US television personalities Andy Cohen and Natalie Morales.