A first-of-its-kind analysis of over 1.8 million social media conversations over January, February and March across the top 10 e-commerce brands

High stakes, an increasing emphasis on efficiency, customer service, even profitability, and a new policy regime—this was the Indian e-commerce market in the first three months of 2016.

But how do consumers feel about the strategies of the companies?

In a first-of-its-kind analysis, we tried to measure these using the lens of social analytics. We analysed over 1.8 million conversations over January, February and March across the top 10 e-commerce brands (horizontal brands that sell across all product categories; the analysis excluded vertical players and second-hand marketplaces).

Flipkart and Snapdeal lead the social buzz followed by Amazon

Three companies stand out at the top in terms of the absolute volume of social conversations. Flipkart had the maximum social buzz with 31% of the total share. Snapdeal was second with a 23% share and Amazon was in third position with 17%. While the GMV (gross merchandise value) shares and absolute social conversation volume shares aren’t a mirror image, there is a correlation between the two: the top 3 account for more than 70% of the social buzz and also more than 70% of the GMV shares as per various reports. 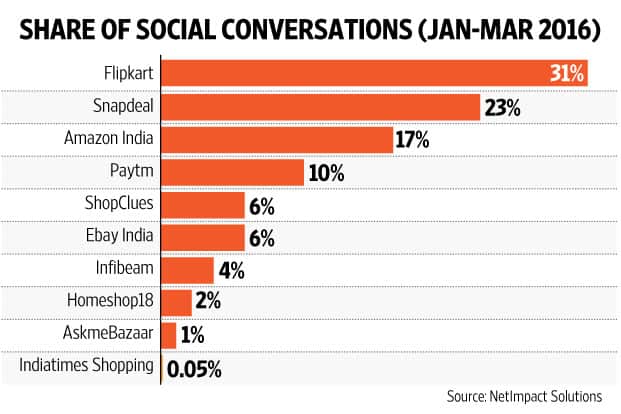 Paytm is at No. 4 in terms of the social buzz followed by ShopClues and eBay jointly at No. 5. Infibeam and the others form the long tail.

Sales and discounts continue to be the most popular strategic tool to grow traffic and stickiness. However, the deployment of this strategic weapon is not plain vanilla—significant sub-clusters exist showing different strategies.

The time-bound, across-categories sales by the firms evoked strong consumer social buzz. While some had more than one sales festival, each of the big three had one that stood out in terms of the maximum social buzz. Amazon had the Great Indian Sale in January 2016—which was well magnified socially too, with an invitation to fans to recreate the #AmazonGreatIndianSale audio tune with a personal twist. Flipkart’s biggest festival sale in terms of consumer response was the #BigShoppingDays in March 2016. For Snapdeal, #RepublicofSavingsSale generated the maximum social buzz.

A significant sub-cluster of discounts and offers were those targeted at specific categories. The top 3 categories where this played out were fashion, smartphones and televisions. Snapdeal opened January 2016 with a fashion festival called “Full On Fashion Sale" which generated high social chatter . Flipkart also had a dedicated fashion sale in January and February called “The Flipkart Fashion Sale" (#FashionForEveryone). Amazon followed suit in March with a fashion thrust that leveraged its sponsorship of the India Fashion Week.

What consumers liked about these sales were the deep discounts and the fact that a wide variety of brands were covered— a few consumers claimed they had changed their entire wardrobe! The fashion category is likely to remain important given its higher profit margins, and repeat purchases on account of both low prices and changing trends.

The second focus category for discounts and special offers was smartphones, with interesting brand tie-ups and significant consumer interest. Flipkart’s significant and customized big brand launches were with LeEco and Motorola. Snapdeal’s launch of TCL Pride in January and Samsung Galaxy J3’s teasers in March had the maximum consumer buzz. Amazon had some exclusive offers with Motorola, Lenovo and Redmi Note 3, though these did not get the same amount of social buzz.

Moving beyond fashion and smartphones, The Big TV Day Sale by Flipkart saw strong consumer interest. Snapdeal followed up in March with a campaign on televisions with an eye on the cricket T20 World Cup (#BringHomeTheStadium).

Besides the big sales, basic discounts on individual items were magnified not just by the companies, affiliates and coupon sites, but also by consumer shares. Interestingly, Flipkart gift vouchers seem to be becoming a standard redemption prize and a lot of social comments are shares of such voucher-led offers. This will no doubt help Flipkart drive upselling and frequency of purchase.

Going forward, in light of the new regulations by the government on discounts, it will be interesting to see the response of companies as well as consumers.

Flipkart and Amazon drive the category expansion and customer satisfaction charge. Amazon leads with a steely focus on brilliant basics

Going beyond discounts, Flipkart and Amazon both had strong initiatives around category expansion and reinforcing the perception of convenience. Flipkart launched an ad campaign around the theme of #EveryoneOnFlipkart in January which resonated well with consumers. While all e-commerce firms swear that flawless consumer experience is a key priority area, Amazon fired a big first shot in this direction in 2016 with a strong campaign Apni Dukaan which emphasised important aspects of efficient e-commerce—easy returns, 100% genuine products and on-time delivery. The campaign also saw a clever attempt to appropriate the emotional space of the trusted neighbourhood shop. It created strong consumer traction and was one of the top 2 conversation clusters of Amazon last quarter.

Flipkart responded later in the quarter with its own Bilkul Pakka campaign in March which focused on genuine products (Bilkul Pakka) and easy returns. This also got traction but an analysis of the chatter reveals that the campaign could do better with a more tangible reason for consumers to believe.

A key metric of customer satisfaction is the proportion of negative social comments by the consumers around service and other issues. An analysis of the same throws up some interesting points and shows that some pain points are yet to be resolved. One is the speed at which refunds are made and customer care issues, closed. A faster turnaround time, along with an even more sensitized customer care interface would help.

Snapdeal did not run a mass ad campaign, but posted an interesting video showing its top management reading out consumer complaints—sending out the signal that they are focused on addressing them.

Amazon, followed by Flipkart, had the least negative comments as a percentage of overall comments in this period. For Amazon, these accounted for less than 2% of overall comments; for Flipkart, it was 4%. Perhaps the quiet confidence exuded by Amazon about its long-term prospects in India stems from its relentless focus on a flawless consumer experience where it has built up an edge.

Paytm: Balancing the muscle of 100 million digital wallets and a focus on two businesses

With more than 100 million consumer digital wallets, if there is one company that can alter the rankings as well as the dynamics of the industry, it is Paytm. The extent to which it can leverage that advantage also depends on the speed of mastering the drivers of e-commerce. This is evident in the social conversation analysis which shows a significant positive buzz around Paytm’s deals and attractive cashback offers. These, though, are countered by a significant cluster of negative comments (spanning payments and e-commerce) around delays in refunds, forfeited transactions and returned goods. It will be interesting to track the speed at which Paytm gets to the best-in-class customer experience on the e-commerce side while continuing a marketing focus on expanding its basic payments business (#PaytmKaro).

A potential Nirma vs Surf battle: Paytm and ShopClues focus on attacking from the lower price points of the market

One would imagine that with such a big focus on penetrative pricing by the top 3, there would be little space for further differentiation on price. However, one of the pricing strategies used by Paytm involves going bottom-up by creating and promoting an interesting property called “Sunday Bazaar", which flags off everyday goods with prices starting from as low as ₹ 29. This has the ability to open up the belly of the e-commerce market, similar to the manner in which Nirma outflanked Surf and created a new market.

ShopClues had also started a similar property called the “Sunday Flea Market" in 2012.

In conclusion, clearly, the stakes are high in India’s fast growing e-commerce market. Companies will likely intensify their efforts going ahead and also try and innovate. It will be interesting to see how the companies and consumers react to policy guidelines regulating discounts.

Infibeam’s IPOMarch saw Infibeam’s initial public offering (IPO), a big milestone in the e-commerce industry’s journey. There were a lot of social conversations around the IPO with several people sharing articles around the IPO. Notwithstanding some influencer marketing that seemed to be present, there was excitement amongst consumers at the prospect of a listing for the first time by an Indian e-commerce player. Some conversations flagged off the positive effect that this IPO would have on the Indian start-up effort and ecosystem. There were some comments wondering, however, if the price was on the higher side.
Alibaba: Initial consumer comments around the dragon’s entryIn China, the dragon signifies power, strength and good luck. And if one company has the scale and strength of a mythical dragon to shake up the Indian e-commerce market, it is Alibaba. Alibaba’s potential direct entry has generated buzz. While most were neutral shares of news articles around Alibaba’s entry, there were a few comments with a positive sentiment. There are also a few worries about the impact of this on Indian firms.

The number of conversations has been arrived at using the following methodology and NetImpact’s proprietary techniques:

l Conversations are defined as shares, tweets, mentions and comments across social media, blogs, news articles and reviews linked to the
e-commerce brands in India.

l Conversations measured are those which could be captured by various tools and packages and NetImpact’s proprietary techniques.

l Conversations considered were the ones that had a direct or indirect mention of the brand. One-off conversations not linked to e-commerce operations have been removed. A capping on multiple identical posts by the same person has been consistently applied to remove artificial outliers.

The author is MD of NetImpact Solutions Pvt. Ltd, a strategic digital and marketing consultancy with a specialization in social analytics.