Mumbai: Encouraged by the runaway success of Singh is Kinng, Bollywood’s producers and choreographers are also looking to deploy the beat of the dhol and turbaned dancers in several projects, with hopes that the Sikh-themed film’s golden touch at the box office might prove contagious.

But the move threatens to turn the industry’s already-tentative dance with unions into another battle. There has been a rush of interest in hiring largely non-unionized troupes to perform—including for Salim Khan’s Kissan, which is currently on the shooting floor—but labour leaders are demanding that the Sikh dancers sign up as “card-carrying" members before they are contracted. 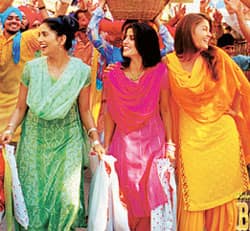 Meagre returns:A scene from Gurinder Chadha’s Bride and Prejudice. Non-unionized dancers pay a fee to compensate members who lose out.

Although talks culminated in the establishment of an independent body to oversee relations, for the Cine Dancers Association (CDA), the influx of foreign dancers in Bollywood—largely from Ukraine, Russia, Britain and Spain—and the hiring of non-unionized members such as Sikh dancers, who say film is not their mainstay, remain unresolved issues and key areas of concern.

“The industry is about trends and, at the moment, they want sardars (Sikhs) after Singh is Kinng," says Ravi Kanwal, secretary general of the 750-member CDA, referring to the blockbuster hit about two schemers named Happy and Lucky. “They want a particular look and they also employ a lot of non-union members."

CDA, which charges male dancers between Rs1.25-1.51 lakh for membership—women pay less than half that at Rs51,000—contends that even though the Sikh dancers pay “relief" money in compensation for lost employment to the union for every shoot they do, they are siphoning off members’ potential income.

Kanwal adds that the situation is aggravated by choreographers such as Shiamak Davar, who was behind the dance moves in Taal, Dil to Pagal Hai and Dhoom 2, and who only works with his own troupe of non-unionized dancers.

“Shiamak Davar’s troupe is not unionized," says Kanwal. “We have spoken to him, but he says that his dancers are not going to take the jobs... He is not willing to take our dancers." Contacted through his publicists, Davar didn’t return calls or emails for comment.

The directors and choreographers often take a joint decision on what sort of dancers to cast in film songs, but of the two contentious groups, there is “greater requirement" for foreign dancers than Sikhs, according to Rajandra Suvamam, president of the Indian Film Dancer Directors Association, which represents choreographers.

“Sikh dancers only do this as a hobby—they are not professionals," he says. “They are mainly bhangra dancers, not regular Bollywood film dancers. And they only come if the requirement is there."

He adds that choreographers have to get CDA and Federation of Western India Cine Employees permission and pay “relief" money in order to use non-unionized dancers, if they want to avoid the shoot being stopped and shut down by the unions.

“There is a greater requirement for foreign dancers," says Suvamam. “For reasons of glamour, colour of skin and because the foreign dancers don’t have hang-ups about wearing scanty clothes."

Harpreet Shera, a 28-year-old dancer with Mauj Punjab Di, a 20-strong troupe of non-unionized Sikh dancers who have lent their dance moves to films including the Gurinder Chadha-directed Bride and Prejudice, Subhash Ghai’s Black & White and the yet to be released Kissan, says the troupe has enjoyed a surge in demand in recent months.

“There is more business," he says. “It is true that they want sardars. And when they require us, they call us to come."

He adds, however, that dancing is not the mainstay for the majority of the troupe, which was founded by his father Mahinder Shera 20 years ago, and that some members even supplement their incomes by working in call centres. His concern is that it is unviable for dancers in Mauj Punjab Di to pay the steep union fees, if they are not regular members of the industry.

“We spoke to union members and they don’t allow us to join because we only do folk dances and bhangra," begins Shera, adding in quick succession: “The main reason I don’t have a card is that I shoot twice a month, so why should I pay so much? Tell me, how I should pay?"

Shera claims he is charged Rs1,000 by the unions for every shoot he does in “relief" money, even though he only gets paid Rs2,500 per shoot, a claim disputed by Kanwal, who says the dancers only pay “maybe Rs100 or Rs200 per day" to the unions in compensation.

Kanwal blames the discrepancy in numbers on the middlemen in the industry, who are charged by choreographers and producers with finding dancers for films, and then take their cut from the dancer—a key issue raised by unions during the recent strike. However, Shera says he pays the Rs1,000 directly to CDA.

The problem is further exacerbated by the favourable treatment shown to female dancers, as well as the politics of joining a union. In addition to obtaining a reference from a choreographer, dancers need to get through an audition with the union committee members, as well as be “tall, fair, good-looking and good dancers".

Membership is currently closed to men, due to a surplus of male dancers, although women, so long as they are attractive and can dance, are welcomed into the union with certain concessions.

However, Kanwal says that allowances would be made for the Sikh dancers if they made the first overture to the union: “They should be a part of the union. They had a chance to join about five years ago, but they decided not to join. If they want to join now, they can come and talk to us and we can find a solution."

Mehul Kapadia, a 30-year-old dancer and member of CDA, says the situation is aggravated by tensions between unionized dancers and the Sikh dancers, especially in light of the latter’s increasing prominence. He adds that although their primary reason to remain removed from the union is financial, it means that other dancers miss out on jobs, even while conceding that the Sikh dancers are in demand for their “authentic" look.

“This trend does affect numbers, in terms of pay and who gets jobs," he says. “Our members get jobless. Of course they resent it."

Kapadia adds that the producers also prefer to hire the Sikh dance troupes to keep costs down, as they arrive with their own costumes, carry their own instruments and sport their own beards.

“They don’t get paid half of what we get paid," says Kapadia, referring to the pay received by the Sikh troupes in relation to unionized dancers, “The producers give us a silly excuse about wanting a look, but if we put that look on, then they have to pay us double, give us the beard, find the dress, etc. The average Sikh dancer costs Rs800-1,000, while I cost Rs2,500 as a minimum, and if I have to put on a fake beard or moustache, my costs can go up to Rs3,000."