Home >Industry >The man you could take home to your mother

The man you could take home to your mother

The man you could take home to your mother

To anyone younger than 35, it would be very difficult to explain that the gaunt, bearded figure appearing in an advertisement had once captivated the entire nation. The ad, somewhat tackily, puns on the word “fans" to evoke memories of a time when Rajesh Khanna was the darling of film goers. That is actually an understatement—he had a fanatic fan following, the likes of which has never been seen before or since. 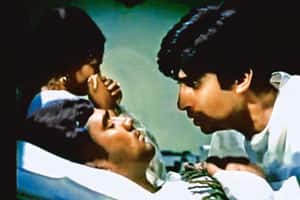 Khanna (real name Jatin) was the son of a middle-class business family. He won a Filmfare contest in 1965, which got him a role in a G.P. Sippy film, Raaz (though Aakhri Khat was released earlier, in 1966). The film was not a hit, though he got noticed enough to be offered some more films like Baharon ke Sapne and Khamoshi.

In 1969, his film Aradhana, in which he had a double role, opened to an ecstatic reception. It had a story replete with emotion and drama, lovely locations and great music. The songs became huge hits and a new screen pair—Khanna and Sharmila Tagore—was born.

The 1960s had been the decade of technicolor confections set in Kashmir and other picture-postcard perfect destinations. Most of the decade was dominated by stars like Rajendra Kumar, Shammi Kapoor and Dev Anand, all known for romancing their heroines with aplomb. The stories were light and frothy; the meaningful cinema of the 1950s was long gone. All these three stars, however, were fading by the end of the decade and there was no heir apparent in sight; Khanna, ever so plump, fair-complexioned and with a sweet, innocent look (in short, quite the Punjabi boy) came as a gust of fresh air that swept the audiences away. He had a cross-generational appeal and was loved by children, teenagers, adults, mothers as well as fathers. Young men copied his hairstyle, young girls swooned over him. When he married a barely 17 Dimple Kapadia, millions of hearts were broken. All this in the pre-Internet, pre-television era. He was a darling of the film press and the first issue of Stardust had him on the cover in 1971.

His was a soft, non-threatening personality that was fully exploited by his directors in films like Do Raaste, Kati Patang, Haathi Mere Saathi and Amar Prem. What many do not adequately appreciate is that he also acted in taut films like Ittefaq and The Train, showing he was capable of doing more than crinkling his eyes and tilting his head. Cross-generational appeal: Rajesh Khanna in a still from Kati Patang.

The advent of Bachchan did not result in Khanna’s immediate decline but by then there was a noticeable shift in audience tastes. Khanna continued to give hits periodically—with a lot of poorly judged films in between—but with rising unrest from trade unions and political turmoil in different parts of India, the mood was becoming more grim and viewers seemed to prefer the angry young man character that Bachchan essayed so well. A Prem Kahani or a Mehbooba could not stand up to the onslaught of the intensity of Deewaar and Sholay. Though Khanna showed he could still deliver in emotional roles (Avishkaar), his era was over.

In the 1980s he had a lease of life with films like Avtaar but it was clear that his days were numbered. With his girth growing in all directions, his mannerisms lost their magic—the old fans had grown up and the younger audiences had found new stars.

A political stint followed as a Congress MP but he made no impact. Every now and then there was some news of a new film but no one remembers any of them, barring an Aa Ab Laut Chalen. He still had the twinkle, but little else. After that he kept a low profile.

The Havells fan ad was a surprise. Though more a shameless way to exploit his one-time stardom rather than pay him a tribute, it brought him back to public attention. Now mummies and even grandmommies can tell their children, “This is the man I loved when I was your age."

Sidharth Bhatia is a journalist and the author of Cinema Modern: The Navketan Story