New Delhi: From the ancient past to Bollywood beats, India showcased its culture at a spectacular Commonwealth Games opening pageant on Sunday that followed weeks of chaotic preparations, which almost derailed the event. 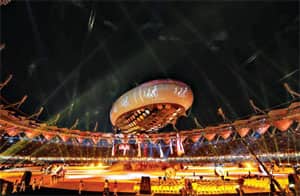 Pomp and show: Giant puppets hang from the aerostat during a performance at the opening ceremony of the Commonwealth Games at the Jawaharlal Nehru Stadium in New Delhi on Sunday. A crowd of 60,000 packed the arena to watch a spectacle that celebrated India’s long history and culture while showcasing the country’s emergence as a powerful economic force. Photo by Reuters

“India is ready. India’s big moment is finally here," chief organizer Suresh Kalmadi said. “There have been delays and many challenges, but we were able to ride over them all."

But in a sign of public anger at the problems, many among the 60,000 spectators at the stadium booed him when he rose to speak.

India spent billions of dollars to showcase its Capital, building a new airport, subways, highways and stadiums in the run-up to what is seen as a coming-out party to celebrate the country’s new economic clout.

The games are being staged in Asia for only the second time after Kuala Lumpur in 1998. 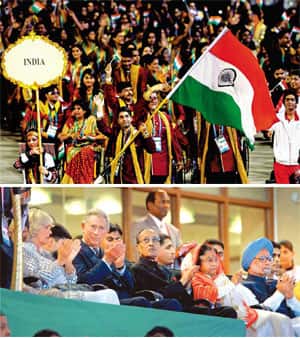 The celebrations began with the throbbing of gigantic drums pounded by men wearing turbans. Before the drum beats grew silent, a massive white helium balloon, almost the size of the stadium’s inner field, rose above the stands. The sides of the oblong balloon functioned as a 360-degree screen on which the show was projected.

The next two hours were a medley of rhythm and melody as artists from various parts of India, ranging from tribespeople to ancient classical dancers, performed on the stage.

Officials hope the spectacular beginning of the Games will help erase the ignominy the country has experienced over the past few weeks because of the last-minute preparations.

At one point it appeared that many teams would pull out to force the Games to be cancelled.

But Indian officials insisted that just like an Indian wedding—when work is going on until the last day—the Games will take place without a hitch.

Amid fears that militants might attack the quadrennial competition, the ceremony was held in tight security, with nearly 100,000 police and paramilitary forces enforcing a lockdown of the Indian capital.

Markets and malls were ordered to shut for the day and major traffic restrictions were in place as security forces lined roads and armed guards were posted behind sandbag positions.

Since 2008, when Pakistan-based Islamist militants killed 166 people in a 60-hour assault in Mumbai, India has been fearful that the Games could be hit.

With the event now open, Commonwealth Games Federation president Mike Fennell said it was time to focus on the sport.

“The preparations have been filled with many challenges and our hope is that the next 11 days will focus on the competition and the athletes in their quest for victory and glory," he said at the opening.