Reliance Mobile’s Unlimited Talktime commercial, by Grey Worldwide, features actors Anushka Sharma and Rannvijay Singh. The two are on their way to a movie theatre and are talking to their respective friends on their mobile phones. Rannvijay’s talktime is exhausted in some time. Anushka points out that her Reliance Mobile connection offers her unlimited talktime—obviously, the better choice.

What are your first thoughts on the advertisement?

It’s interesting that you ask this question. The ad itself is about the pros and cons of one network over the other. In that sense, it’s the ancient formula of the dirty sock test. Which detergent washes whitest, or in this case, which network works better? Reliance seems to be the only network that has gone the comparison way. The rest, whether it’s Airtel, Vodafone or Tata Docomo, are talking about themselves mostly. The Reliance kind of comparison— to show the difference between two networks—has been done in markets outside of India.

Do Anushka and Rannvijay work for the brand?

Anushka reminds me of Deepti Naval of the early 1980s—fresh and talented. I think it’s a good idea to bring in younger, fresher faces to represent brands. How much can one see the same celebrities endorsing everything from biscuits to underwear to LCDs? This one is a good commercial break. And it would have saved up some marketing budgets which must have gone into media. 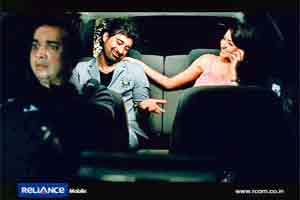 Commercial break: The use of young, fresh faces is a welcome change.

Your thoughts on the Reliance Mobile brand, and its positioning?

As I said, of late, they seem to be in a comparative mode. The only trouble with that is you don’t really have a voice. As a consumer, I don’t know what to make of the brand. People are not really rational beings at the end of the day. You don’t go to sleep at night counting how much money you saved up by talking on a particular network.

Are there enough clutter-breaking ads in the category?

The category is bleeding out of the television. Earlier, there was just a cute pug and a Bangalore boy. Now, there are so many different voices asking for attention. But the good thing is most have found their voices. They all are in distinct spaces, and that I think is a good thing. Docomo is so different from Idea. The recent Airtel work is so distinct from Vodafone.

Any international ad in the same category that you loved?

I liked what T-Mobile had done with Josh’s Band a while ago. They got everyone across different places come together to form perhaps the biggest band ever—all rank newcomers who had dreams to compose music together. So T-Mobile got them all together by getting Josh to start it. Music is a great way of connecting anyway. And it worked.

As told to Anushree Chandran.