Which country has the best beauty deals?

Vietnam has some of the best beauty deals, with nose jobs below $1,000, while Nordic nations are among the most expensive for cosmetic surgery, products

A nose job for under $1,000 and a $7 manicure-pedicure help Vietnam rank as the most affordable international destination for beauty products and services.

The south Asian nation reigns supreme in the Beauty Price Index, which was compiled by Latin American e-commerce platform Linio and ranks 50 countries by their average retail cost (including tax, but not shipping for online products) of 16 different services, cosmetic procedures and products in the beauty industry. Prices were converted to U.S. dollars via May 2017 exchange rates. India, South Africa, Thailand and Egypt round out the top five cheapest such marketplaces. The best bargain for an eyebrow wax is in Egypt ($1.93), while South Africa boasts the most affordable anti-aging creams ($22.81).

Vietnam claimed the most-affordable spot in the gauge even as retail prices rose from 2016. Rural consumers have been gaining the wherewithal to spend on branded products as consumers generally opt for more natural and organic items, according to a May report released by Euromonitor International, a consumer research and strategy firm.

The country’s frontier-market status speaks to its growth prospects, while beauty-care prices could stay modest given increased imports from regional neighbors through stronger trade ties, even amid the languishing Trans-Pacific Partnership deal.

Venezuela, where political unrest has sent prices throughout the economy soaring, ranks as the most expensive in the index, alongside Switzerland, Norway, Denmark and Finland. A breast augmentation procedure is the priciest in Switzerland, where they’re charging an average $10,434.

Women need to be prepared to spend just short of $100 for a haircut in Norway, where men are charged an average $37.50 for the third-most expensive trim among the 50 countries. 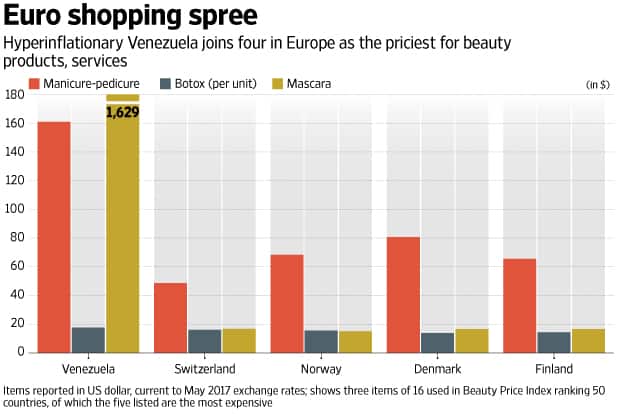 The European countries have a brighter story. Denmark, Finland, Norway and Switzerland also happen to snag four of the top five spots in this year’s World Happiness Report, a ranking of 155 countries based on measurement by independent experts who are commissioned by the United Nations. While inflation in those countries is generally tepid, beauty products and services remain the territory of big spenders, at least relative to global peers.

For each category, Linio attempted a thorough accounting of deals within the given country; cosmetic procedure prices, for instance, were assembled from at least three clinics per major city in each country studied.