Amid the boom, Indian art straining to reinvent itself

Amid the boom, Indian art straining to reinvent itself

Mumbai: For an uninitiated Westerner, making your way to one of this city’s new art galleries can be a disorienting study in contrasts. In the crowded streets behind the Taj Mahal Palace and Tower, where the air is heavy with the smell of gasoline and flowers, you are approached by women begging for money and food. Men shout invitations to enter their carpet shops or purchase wares such as watches, magazines, leather jackets and cigarettes.

Then, from a narrow thoroughfare, you enter a courtyard where an old man sits wearing a black security uniform. He speaks no English but, when asked for directions, points towards a flight of wooden stairs so worn they are bowed in the middle. At the top, a door is opened by a barefoot woman in a scarlet sari. Behind her is an art gallery as white and sleek as any space in Chelsea.

These contradictions do not arise from any calculated exoticism. This is simply the new India.

“It isn’t as if we are not aware of what is happening in New York or Berlin or in China," the dealer Usha Mirchandani said in an interview at the gallery. “It is just that we find ourselves in a new position, and we must find our own way. New scene: More and more galleries are opening up or refashioning themselves as money pours in and Indian art get a lot of attention, both here and abroad. This renewed energy is evident in Gallery Espace (above) in New Delhi and Sakshi Gallery (below) in Mumbai.

The Indian art world has more than changed. It has exploded. Prices have increased 10-fold since 2002. In the last two years alone, they have nearly doubled. Works by India’s top-selling contemporary artists—Atul Dodiya and Subodh Gupta are the names most often cited—can fetch hundreds of thousands of dollars. The auction price of paintings by the older generation of great Indian modernists such as M.F. Husain or F.N. Souza can easily pass a million dollars— hardly uncommon for leading Western artists but staggering in a country where the average income among the 1.1 billion residents is about $820 (about Rs32,400) a year.

In the next few weeks alone, at least seven large-scale exhibitions of contemporary Indian art will open in Italy, Switzerland and the US.

Given the attention and fistfuls of money being thrown at Indian art, more and more galleries are opening or refashioning themselves. Some spaces are being retrofitted or built from scratch to accommodate bigger art and the more complex video or multimedia installations that are fresh additions to artistic practice in India.

In New Delhi, Gallery Espace, Vadehra Art Gallery and Talwar Gallery are three elegant examples. A fourth is Nature Morte, considered by many to be the pre-eminent gallery of contemporary art in India. It recently opened a second space in New Delhi to house artists’ projects and a third space in Kolkata with its New York partner, the gallery Bose Pacia. Similar energy is gathering in Mumbai, where Galerie Mirchandani + Steinruecke, Bodhi Art (which has other spaces in New York, New Delhi and Singapore), Sakshi Gallery, Project 88 and Chatterjee & Lal have all opened or moved and expanded during the market’s rise.

Shilpa Gupta, a 31-year-old artist based in New Delhi whose videos and installations are exhibited in Asia, Europe and the US, echoes the breathlessness of the moment. “It doesn’t matter who’s a star now," she said. “It’s so beautiful. You can hang out, chill out. We all know each other, and everyone is doing very well, and it’s fantastic."

Yet, paradoxes surface in even the briefest conversations with artists, dealers, collectors and writers here.

Money pouring into the art world from non-resident Indians who have made their fortunes in the US and Europe, along with the racing engine of India’s $1 trillion economy, has enabled artists to travel abroad far more often than they did before. But with this change has come the slow unravelling of the tightknit community that Gupta idealizes and that now gathers mostly at far-flung exhibition openings—hardly the forum for intense discussions of issues and artwork. And for all its recent plenty, as art consultant Jai Danani pointed out, the money has yet to bring its Midas touch to the Indian art world as a whole—that is, to generate the largess needed to create art schools, studios and museums for contemporary art.

Alongside the auctions, art openings and dinners at fashionable restaurants such as Indigo in Mumbai, another reality sits on an unpaved street in Khirki village in southern New Delhi. There in a plain two-storeyed building stands KHOJ workshops, the only residency programme for contemporary artists in the entire country. Across the way, a man sleeps on bare ground near a family surrounded by a cloud of flies. Inside are five small studios on two floors for visiting artists. In the “reference room", exhibition catalogues teeter in stacks on the floor, organized by subject categories jotted on sheets of paper taped to the walls. 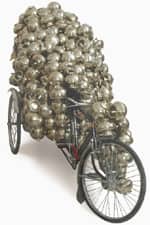 Nikhil Chopra, a young performance artist in Mumbai, said: “I can’t believe we’re a country of a billion people that doesn’t have more than a couple of decent art schools, no contemporary art museum, no real funding, no group of trained curators fluent in contemporary art, no art criticism in the newspapers, just one serious art magazine, Art India, and only a few major collectors of contemporary work. In other words, no real infrastructure at all."

But there are signs that the situation is improving. A modern art museum is being planned for Kolkata. A leading collector, Anupam Poddar, will soon open the Devi Art Foundation’s new headquarters in New Delhi to house his collection, organize exhibitions and hold lectures and talks. Jawaharlal Nehru University in New Delhi now has a School of Arts and Aesthetics, a fairly sophisticated programme of art history and cultural studies. Websites have sprouted that cover Indian art: Mattersofart.com, artconcerns.com, Indianartnews.com, along with the online auction site, Saffronart.com.

Yet, there is no doubt, as Peter Nagy, the owner of Nature Morte, put it, that the Indian art scene is in its “pimply, adolescent phase". It is an art community in upheaval, straining to reinvent itself for the 21st century.

The artists themselves, exposed first-hand to European and American art and artists as never before, with the Internet allowing them to sample whatever they care to see, find themselves in a fluid global arena of influence and identity. Their art is no longer confined to Indianness in subject or style, and the topic comes up without prompting in every conversation.

Sipping lassi, in his New Delhi studio on a recent afternoon, Subodh Gupta (no relation to Shilpa) said he had steadily resisted the encroachment of global tastes. As he spoke, two assistants nearby quietly polished the surfaces of Miter, a large, multipart sculpture of cascading stainless steel pots.

“We are travelling, getting much more informed, and the information gives us useful knowledge," he said. “But my work with these stainless steel pots and utensils comes from my lower middle-class childhood, of memories of family and the rituals around food. This is my own language, my strength. If I make art just for the market, I am nothing."

Not everyone sees the work made today as so earnestly conceived. The editor of Art India, Abhay Sardesai, said many artists were trying either to overlocalize or to overglobalize themselves, depending on how one views it, exploiting common symbols of Indian culture so that the “local is flogged to create a spectacle for international consumption."

Yet, it is the local, of course, that makes Indian work interesting as it climbs into the firmament of high-profile contemporary art. There is an almost infinite sense of locality here, with 22 languages, a sprawling literature dating back 3,500 years and a cauldron of Hindu and Muslim conflict and coexistence in the largest democracy on the planet.

Gayatri Sinha, a critic and curator in New Delhi, suggests that more than any other source of influence, it is the politics of the subcontinent that mould the context in which Indian art is created today. Husain, generally considered the country’s most distinguished painter, just spent his 92nd birthday in exile, forced out by threats from Hindu groups enraged by his paintings of nude gods and goddesses.

Film-maker Amar Kanwar, who recently showed The Lightning Testimonies, his video installation about sexual violence to Indian women, at Documenta 12 in Kassel, Germany, said artists in India are “challenged ideologically every step of the way".

“And yet this friction can be a source of great creativity," he added.

“This is an extremely intolerant society, an extremely racist society," he said in an interview at his office in a middle-class neighbourhood in New Delhi. “You will run into censorship, but you can make a place to work here."

“Indian artists are showing all over the world," he said, “and each day they have to decide how they will confront their society and themselves. They will be critical, or they will just make work for the market."

A note of defiance entered his voice, a note often heard in reply to questions on this issue: Why do Westerners assume that globalization only runs one way—from West to East?

The dealer Deepak Talwar, with galleries in New York and New Delhi, said: “The real history of modernism hasn’t been written yet. It is all about Europe and New York. But that’s hardly the whole of modernism. A hundred years from now, people will laugh at these narrow histories."

But in the meantime, the Indian art world is writing the latest chapter of its history at a frenetic pace. One night, Atul Dodiya and his wife, Anju, two of the most prominent contemporary artists, surveyed the crowd at a closing party at Chemould Gallery in Mumbai, one of the longest-running and most respected spaces for new art since its meagre beginnings in the 1970s. The gallery’s owners were bidding goodbye to their shoebox space of 800 sq. ft.

It was a moment of symbolic weight, the end of the old Indian art scene and the beginning of the new. Their polished new gallery, Chemould Prescott Road, is four times the size of the old.

“I have so many memories in this space," Dodiya said. “It was almost a different world. We are happy for this boom, but I have to make art that means something to me, not just for the international market.