Showing the way | IPL changes the game for others

Showing the way | IPL changes the game for others

Several big companies are now looking beyond cricket to other sports to market their brands. Sports such as football, hockey and golf, which have traditionally been overshadowed by cricket, are beginning to get their share of attention, attracting big sponsorship deals from companies. All about marketing: Latika Khaneja, director, Collage Sports Management, says there is a growing interest in signing on stars from sports other than cricket. Madhu Kapparath / Mint

It was, in fact, sportswear brand Nike Inc. that recognized the potential of football in India, both in terms of audience interest and the opportunities available to promote the sport. In 2006, Nike entered into a seven-year partnership with the All India Football Federation, the biggest contract ever signed by the federation, to sponsor and promote the game. At a global level, Nike has been promoting the sport through Manchester United Premier Cup, or MUPC, a regional tournament for players under 15 years.

The tournament began expanding outside the UK about four years ago. In India, it has attracted participation from teams from Mumbai, Tamil Nadu, Bangalore, Orissa, Puducherry, Kerala, Gujarat, Delhi, Chandigarh, Goa, Kolkata and the North-Eastern states. The winning team from India has twice won the South-East Asia regional finals.

“Nike’s core focus in India in sports is cricket, running and football. Our consumers across these sports are different. A football-obsessed teen is very different from an active runner who, in turn, is different from an avid cricketer. As a brand, we address these different consumer needs through relevant products and programmes," says Sanjay Gangopadhyay, marketing director, Nike India Pvt. Ltd. 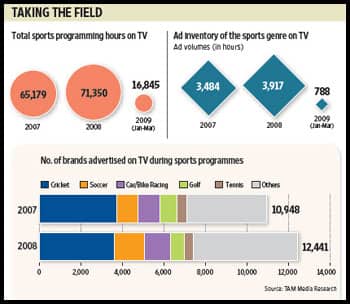 There is no doubt that cricket owns the sports space in India, but advertisers are trying to break the clutter and reach out to other sports and market them aggressively. Ahmed Raza Khan/Mint

So far, cricket has dominated the sports space in the country; the unprecedented success of IPL has only strengthened its hold. According to industry estimates, cricket accounted for 85% of the Rs2,000 crore spent on sports sponsorships in 2008 and will continue to account for the lion’s share of sports revenue which is expected to grow by 25% this year. Although hockey, chess and tennis have seen Indian players trying their luck at international events, the magnitude of interest and revenue generated so far has remained negligible. But this is now changing.

“There is no doubt that cricket owns the sports space in India and this is how it will remain for years to come, but advertisers interested in sports marketing are trying to break the clutter and reach out to other sports and develop them, and then market them aggressively," says Hiren Pandit, managing partner, GroupM ESP, the entertainment, sports and partnerships division of GroupM, the media buying arm of the UK-based marketing communications conglomerate WPP Group Plc. “So you have ESPN trying to promote hockey, brands like Airtel and Vodafone promoting marathons and Apollo promoting tennis and Zee promoting football, but all on the bank (banking on the success) of cricket."

Many sports are trying to replicate the IPL formula. For example, the International Boxing Association, or Aiba, will be holding a league-based boxing series, World Series of Boxing, in September 2010, where 12 franchises from Europe, Asia and America will participate. Aiba is in talks with the Indian Boxing Federation to gauge franchisee interest from companies here. 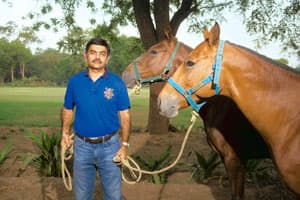 Packaging it right: Adhiraj Singh, polo player and chief executive officer, Equisport Management, says the success of the Indian Premier League has taught him what a successful mix Bollywood and sports are. Harikrishna Katragadda / Mint

After tasting success with its IPL team Delhi Daredevils, infrastructure company GMR Group is looking at investing in PowerPlay Golf, a fast-paced format of the sport designed on the lines of the T20 formula. The concept was developed in Britain in 2007 and PowerPlay Golf is on the lookout for franchisee partnerships across the globe, with India being one of the shortlisted venues.

“The amount of money companies are willing to shell out for cricket has put India on the global forefront of sports sponsorships. Other sports see this (as) an opportunity to strengthen their game in India," says Singh.

The frenzy over IPL and cricket in general is rubbing off on other sports, and has pushed up television programming in this genre significantly. According to TAM Media Research Pvt. Ltd, or TAM, a Mumbai-based television audience measurement agency, the total sports programming hours on television grew by at least 6,000 from 2007 to 2008; sports programming accounted for 71,350 hours. The number of dedicated sports channels in India has gone up from five in 2007 to eight this year.

Says R.C. Venkateish, managing director of sports broadcasting company ESPN Software India Pvt. Ltd: “We devote a lot of hours to soccer, motorsport, tennis, golf, etc., in addition to cricket. The network has also witnessed a significant increase in the number of cricket hours with us acquiring ICC (International Cricket Council) rights till 2015, as well as the Champions League T20 (rights) for 10 years, which led to the launch of a 24-hour dedicated cricket channel in Star Cricket."

“The number of tournaments or live content shows on sports channels have gone up significantly. At Zee (Zee Sports), our live content has increased by 15% in the last three years, and this basically means (that) there is more interest generated towards this genre," says Roland Landers, head, corporate brand communications, Essel Group.

Viewership share of the sports genre across channels, however, declined from 3.2% in 2007 to 2% this year, according to TAM data. Industry experts blame the fragmentation of media for the fall in viewership shares across genres. “The number of channels have multiplied in the past few years and viewers have a lot more to choose from," says Farokh Balsara, national sector leader, media and entertainment, Ernst and Young India, an audit and consulting firm. “So even though the viewership on TV may have gone up, the eyeballs are spread across a lot more channels, thereby impacting individual viewership shares."

This is no deterrent, however.

The National Basketball Association, or NBA, America’s national men’s basketball league, has been broadcasting its games on ESPN Star Sports since the early 1990s, but it started marketing the game to audiences here only last year. It is using aggressive marketing techniques and grassroots programmes that were kickstarted in association with the Basketball Federation of India in July last year.

Similarly, the International Hockey Federation, or IHF, the worldwide governing body for field hockey, is keen on reviving interest in the sport in India, given that the Hockey World Cup will be hosted in India in 2010 after a gap of 28 years.

“Hosting the World Cup in India was IHF’s effort to address the decline of the sport which was once ruled by India," says Jamie Stewart, managing director at Commune Sport and Entertainment, a sports sponsorship and marketing agency that provides services to IHF. “Apart from reviving the sport in the country and bringing it back to its former glory, it is also a long-term global positioning strategy for the sport of hockey, as it is important for IHF that the potential of the Asian subcontinent be unlocked." 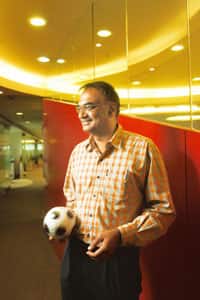 The growing representation of Indians at international competitions has also given a new marketing thrust to niche sports such as golf that have seen Jeev Milkha Singh, Arjun Atwal and Jyoti Randhawa pick up international titles in the past few years. Individual sports such as boxing, shooting and wrestling are seeing renewed interest among companies in terms of sponsorships and development after India won medals in these sports at the 2008 Beijing Olympics.

Experts believe advertiser interest in other sports will only grow. “Advertisers are going to be where consumers are and going by (the) past data, television viewership is expanding beyond cricket and, therefore, so will advertisers," says Punitha Arumugam, chief executive, Madison Media, an arm of Madison Communications Pvt. Ltd, one of the largest media agencies in India.

Industry watchers say that even in the brand endorsement space, cricketers will increasingly find other sports stars sharing space with them. “While cricketers account for 99% of brand endorsements in India, there is a growing interest in signing on stars from other sporting fronts as well," says Latika Khaneja, director, Collage Sports Management, which represents cricketers Virender Sehwag and Gautam Gambhir.

“Brand endorsements are about heroes (and) not so much about sport, so getting advertiser interest depends on how the sport or the person has been marketed...it’s all about marketing it right," says Khaneja.